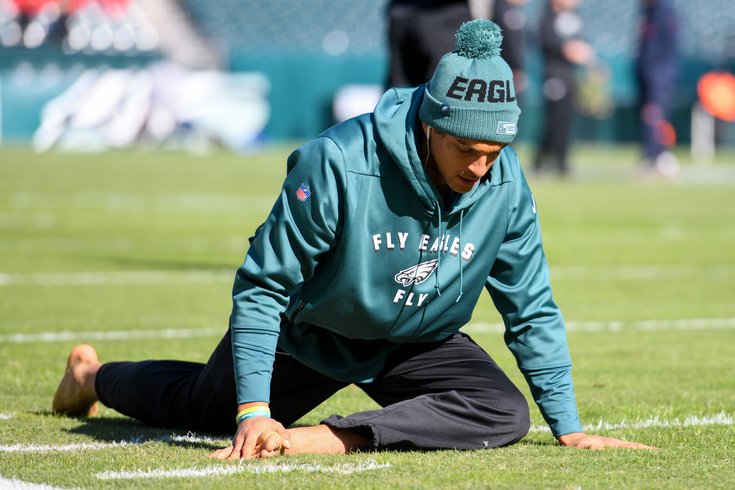 Analysis: We didn't mention this in our 10 awards, and we probably should have, but the offensive line played very well against a good Bears front. Dillard is making a strong case to be a permanent replacement for Jason Peters.

Analysis: Sanders is obviously a better runner and receiver than Sproles, and if there's any difference in pass protection, it's negligible, as Sanders has been good in that area. There's nothing that Sproles definitively does better than Sanders, and I don't see any reason for Sproles to be taking a single snap away from him. Sproles should be the punt returner only, and backup to Sanders if Sanders gets hurt. That's it.

Analysis: Hollins and Arcega-Whiteside have been useless, while Agholor and Jeffery have actively hurt the team at times this year when the ball has come their way. Meanwhile, Jackson's triumphant return lasted all of four plays, and I don't know how anyone can possibly feel confident that he can stay healthy. I think it's pretty clear at this point that he should have had surgery when he initially suffered his abdomen injury earlier this season.

Is this the worst wide receiver group in the NFL right now?

On a side note, I know that many are clamoring for Arcega-Whiteside to play more, and I agree, seeing as Hollins is giving the team absolutely nothing. However, it is worth pointing out that Arcega-Whiteside has played 179 snaps so far this season, and he has two receptions, so it's not as if he is making good use of the opportunities that he does get.

Analysis: It was strange to me that Ertz came off the field a few different times on the Eagles' last eight-plus minute drive, but I guess it's hard to argue with the results.

Analysis: The Eagles' low number of snaps overall defensively benefit Cox more than any other player on the team, as he is going to be asked to play a higher percentage of snaps than he normally would with the Eagles' injury-depleted defensive tackle position. A light load on Sunday, followed by the bye week, should be great for him as the team heads into the stretch run.

Ditto that for Barnett, who Doug Pederson has credited with playing through the pain of a shoulder injury he sustained last season.

Analysis: Avery was listed as a linebacker on Sunday, but he played more of a stand-up pass-rushing joker role. The Eagles showed that look in training camp and the preseason games with Joe Ostman before Ostman tore his ACL, and it appears as though they're going to utilize Avery that way as well.

Analysis: Over the last four games, Sendejo is playing 32 percent of the defensive snaps, and he had an incredibly stupid penalty on Sunday when he hit a sliding Mitchell Trubisky late. As a reminder for the infinity-th time, the Eagles will gain a fourth-round compensatory pick if they cut this dead weight of a player by Saturday.

Also, not noted above is Sidney Jones, who was a healthy scratch. That's a less than awesome moment in his football career.