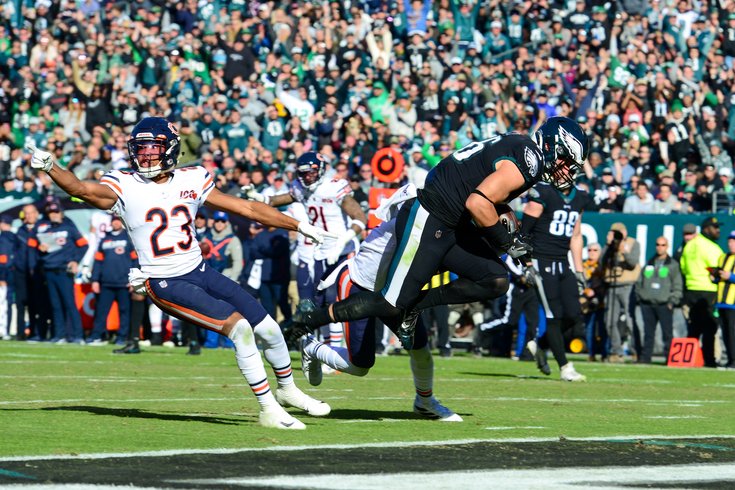 Zach Ertz scores a touchdown during the first half of the Philadelphia Eagles win over the Chicago Bears.

The second half felt like an exercise in torturing their fans, but the Eagles made big plays in the fourth quarter when it counted, and they head into the bye week at 5-4 following a 22-14 victory over the Chicago Bears.

• In a game that often felt like a slog, Zach Ertz was one of the day's real bright spots. Teams have taken him away a lot of this season, and without his No. 1 option/security blanket to turn to when times have been tough, Carson Wentz has struggled to find a reliable target in the passing game.

Finally, Ertz reemerged as the go-to guy who can carry the passing game for stretches. He hurt the Bears underneath, he got tough yards over the middle, the Eagles got him rolling some to the outside — it was a great display of what separates Ertz from many of his peers around the league. He may not be singularly great at any one thing, but he's very good at a lot of things, which makes it easy for the coaching staff to move him around and dictate matchups and looks they get from opponents.

It's unfortunate, though, that he has to do so much heavy lifting for the passing game to get going. They should not live or die through the air based on Ertz alone.

• This right here is football in its purest form. No illusions, no trickery, just the offensive line bullying the Bears and Jordan Howard going full speed ahead through the hole, picking up a touchdown in the process.

I don't think it's any surprise Eagles fans have taken a liking to Howard this year. Even when the offensive line play has been subpar, Howard has been smart about taking what defenses give him, and he has the power to create a couple of extra yards on every play. When you're turning potential losses into neutral plays or short gains, when you're turning five-yard gains into eight and nine yards, you're going to put your offense in a great position to sustain drives and get more exotic with playcalls.

The raw yardage hasn't been crazy this season, but Howard has been impactful for this team even in short bursts, and as they move into the colder months of the year, I'd expect their battering ram to really punish opposing defenses.

• Since you can't bring up one running back without the other, I think it's fair to say Miles Sanders is finally finding his footing in the NFL. The hesitation he showed in the backfield in the early weeks has disappeared, and it has allowed him to show off the skills that got him drafted to begin with.

And not that this is saying much given the strength of the unit, but Sanders may legitamately be the best wideout on the team. At this point, I think the Eagles should consider splitting him out some more and getting him even more involved through the air. They are insistent on shoehorning Sproles in as a pass-catcher, why not use the younger and better option?

With as bad as the offense has been through the air this year, it seems like a no brainer at this point to lean on the 1-2 punch in the backfield to set the tone and sustain the offense. Sanders and Howard have earned some trust over the first nine weeks of the season, and power football is a lot less fun to play against when you can see your breath in the cold winter air.

• The second half approach left a lot to be desired, but credit to Doug Pederson and the Eagles' offense for pulling out the plays they needed to with the game still up for grabs late in the fourth quarter. All the momentum seemed to be tilting in Chicago's direction, and the Eagles were up against third down multiple times on their game-killing drive, but they found the right calls when they absolutely needed them, designing some excellent screens to catch the aggressive Bears off guard.

Whether they should have waited until the game turned into a toss-up to get back to a healthy run-pass balance is a different story, obviously, but they got it done in the end.

• There's not a whole lot of good here in a game the Eagles led from start to finish, which is mostly a product of the second half being surprisingly poor for Philadelphia. If you want to read more of the good stuff, head on over to the review of the first half, which wasn't perfect but certainly much easier to stomach from Philly's perspective.

• The Bears started to get going after a deep ball from Mitchell Trubisky to Taylor Gabriel, and I have to be honest, I'm not sure who Malcolm Jenkins thought was a threat underneath here that deserved his attention.

Here's how Gabriel shook loose on that 53-yarder via NextGen. pic.twitter.com/ygtkSrAccv

Everyone was accounted for except for the guy who went directly behind Jenkins, who everyone should expect to be better. I'm not sure if it's the fault of the players or they're just receiving poor instruction because it's pretty obvious where the safety help has to be on this play.

• It's one thing for guys like Mack Hollins and Nelson Agholor to make mistakes week in and week out. They are who they are, and there shouldn't be serious expectations for them at this point. But Alshon Jeffery, a guy who still has a bunch of guaranteed money coming his way after this season? That guy should be a standout in this offense, and he has been straight up ordinary (or worse!) most of this season.

The absence of a deep threat to complement his skill set is not an excuse for Jeffery leaving plays on the table. He had a terrible drop on a Wentz throw that was on the money midway through the third quarter, and he followed that up with an even worse one on a critical fourth-quarter drive. Jeffery's hands have suddenly become a bit of a problem after being reliable for most of his career. When your strength is supposed to be winning one-on-one battles to compensate for a lack of elite top-end speed, you absolutely can't afford to put catchable balls on the turf. And he did that three times on Sunday.

Health issues have been an excuse for blips in the past, but there's no real reason for his mistakes (that we know of) at the moment.

• Bad as the receivers have been, Wentz does not come out of this blameless either. Yes, their inability to separate has been subpar all season, but there are plenty of plays you can point to on tape where Wentz had someone and either overthrew them for an incompletion or missed the window by just enough to turn it into a tough play, minimizing the yards after the catch or leading to a dropped pass.

It's never fair to ask someone to be perfect. That being said, Wentz is being paid to be the most important offensive player on the football team, so the demands on him can and should be higher than they are for everyone else. No matter how many drops there are, he has proven himself capable of playing better than he did on Sunday.

(On the positive side of things — Wentz led the offense on a clock-killing drive when they needed it most, executing late-game offense to perfection. If not for the poor efforts of his skill position players, maybe this game looks much different for him. As Nick Foles showed throughout his tenure in Philly, sometimes it's enough to just string together a few good drives.)

• Think about those last two sections, and then try to figure out why Doug Pederson decided to mostly abandon the running game in the second half. When the Eagles were at their best on Sunday, they were run-first and then using the threat of the run game to open things up. For whatever reason, the Eagles decided that was the time they would start trying to hurt Chicago through the air, and they let the Bears back into a game that long should have been put away.

By the time the Eagles tried to go back to it, it was obvious they were trying to run the clock out, and the Bears sniffed out the plays easily. It's the weirdest thing about this Eagles offense. When they do something well, they don't seem to go back to it that often. When they have a play that they like that drives the entire fanbase nuts, like WR screens to slow receivers, they run it into the ground. It doesn't make a whole lot of sense to me.

• Someone put a Darren Sproles jersey on Boston Scott and forget to tell Doug Pederson about it. At worst it'll be a net neutral move.

• Not sure how many variations of "Dick Stockton is old and blind" and "Mitch Trubisky stinks" I can fit in this section without it getting annoying, so let's just play it safe and lump them all into this paragraph.

• According to the broadcast on Fox, DeSean Jackson didn't feel like himself after making his first quarter catch, and the Eagles removed him from the game for precautionary reasons.

With that information in mind, they absolutely made the right decision to play it safe with Jackson, but his fragility really calls into question their approach at the trade deadline. There were options out there for reasonable prices, but the Eagles decided they were good with what they have. Watching this passing attack week after week, I disagree, and while they get a bye week to finally get Jackson right before two tough home games in a row, I don't think you can bank on getting anything from him the rest of this year.

• Matt Nagy is a coward: