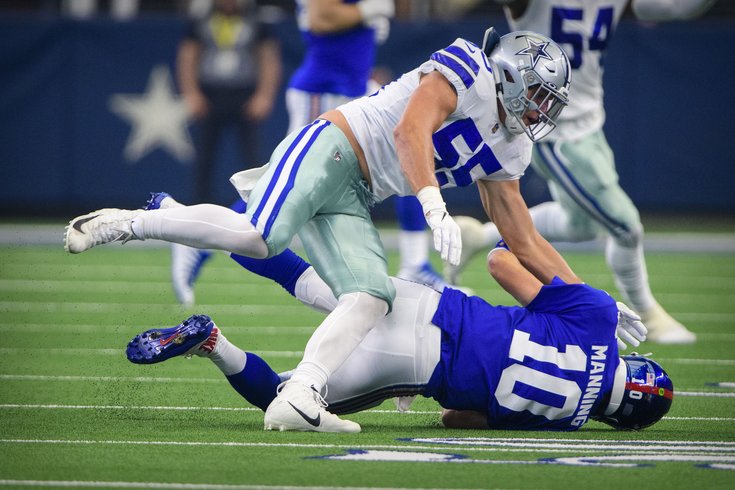 The Cowboys won't have Eli Manning to pick on anymore.

Each week this season we have laid out a rooting guide for non-Eagles games on the NFL schedule, based on the premise that the Birds are Super Bowl contenders. They have not looked much like contenders to win it all through the first half of the season, but we'll see if that changes down the stretch as they get some players back from injury.

Anyway, here are the best scenarios for the Eagles this week outside of Philly, with the ideal winners in bold.

• 49ers at Cardinals: At this point, the best scenario for the Eagles is if the Niners get the No. 1 seed. They have a very good defense, but I believe they are vulnerable in the playoffs, given the lack of playoff experience by Jimmy Garoppolo. We pointed out last year when the Eagles faced Mitchell Trubisky that quarterbacks playing in their first ever playoff game have a bad enough overall record that it doesn't feel at all like a coincidence.

• Vikings at Chiefs: Obviously, a Chiefs win is the better outcome. Minny is 6-2, and essentially three games ahead of the Eagles as a result of a head-to-head win, but never rule out a late-season choke-ski by Kirk Cousins.

• Titans at Panthers: I think it'd be stupid for the Panthers not to immediately put Cam Newton back in as the starter whenever he's ready to go, so I'm torn whether a win or loss by the Panthers is better for the Eagles, since a win might help convince them that Kyle Allen is some kind of better option. Eh, a loss in the standings is still probably better.

• Lions at Raiders: The 3-3-1 Lions have the Cowboys on their schedule Week 11, and the more they win, the more they'll have to play for at that time.

• Packers at Chargers: The Eagles already beat the Packers in Green Bay, and might have the confidence to do so again if they have to in January. So maybe it's best if the Packers beat out the Saints for a first-round bye?

• Washington at Bills: It's better if Washington messes up their draft position.

• Buccaneers at Seahawks: Are the Seahawks good? I think that's debatable. But obviously, a loss for them is better here.

• Patri*ts at Ravens: Is it better if the Eagles face an unbeaten Patri*ts team, or a one-loss Patri*ts team? I don't know the answer. Discuss.