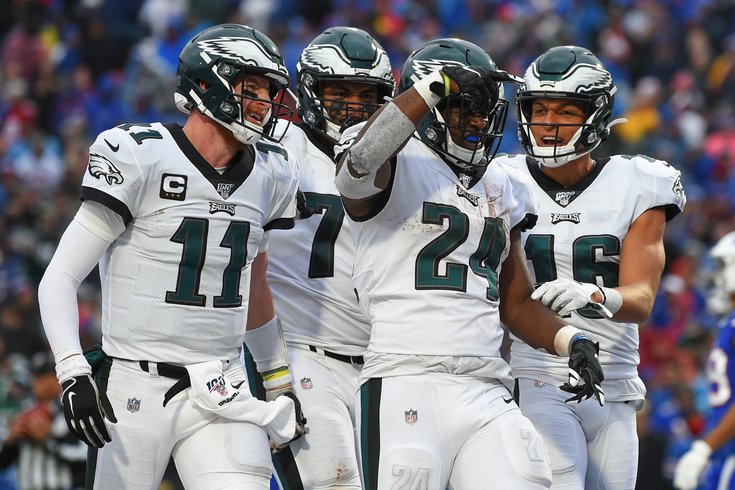 Philadelphia Eagles running back Jordan Howard celebrates his touchdown run against the Bills.

Just one game stands between the Eagles and the bye week, but it's a big one — they'll pretty much all be big games going forward as the margin of error for Philly is minimal after a less-than-stellar 4-4 start to the season.

This weekend, they'll be hosting the Chicago Bears, the team they knocked out of the playoffs in the Wild Card game in January thanks to Cody Parkey's now-infamous "Double Doink." Unlike last season, when the Bears won the NFC North, Chicago is just 3-4 after three straight losses and is in desperate need of a win in order to right their ship. Will they be able to upset the Birds at home on Sunday, like the Birds upset them at Soldier Field back in January? Will Jordan Howard run wild against his former team? Will Allen Robinson go off against a secondary that's had its fair share of issues this season?

We'll try to answer those questions and more as we take a look at some numbers to watch this week in the form of our five Eagles over/unders...

[Apologies in advance if you were hoping for something on DeSean Jackson in here. Given that we still don't know for sure how much he'll play, if at all, against Chicago, it was nearly impossible to come up with any numbers for him.]

That's the current total being offered over at Bovada for Sunday's game between the Eagles and Bears, and based on our writers' predictions, that seems right on point. Currently, our five score totals average 41 points each, with three people taking the over and two taking the under.

The Eagles, with the exception of their loss to the Cowboys, have scored at least 20 points in each game this season, so there's less of a concern about them holding up their end of the bargain offensively, even against that tough Bears defense. The real question is going to be whether or not the Bears can get anything going on offense against an Eagles defense that has had some issues this season.

The weather at the Linc shouldn't be a problem on Sunday either, like it was last week in Buffalo. Even then, the Birds and Bills were able to combine for 44 points. I can certainly see this being a low-scoring affair, but I've already locked in my prediction at 27-16 Eagles, so I guess I'm also locked into taking the over here.

After averaging just 11 carries per game through the Eagles' first seven games, Howard broke out in the Birds win over Buffalo with 23 carries (for 96 yards and a TD), his most since Week 3 of last season. Sure, Miles Sanders had the long, flashy TD run, but it was Howard establishing himself as the Birds' workhorse against Buffalo.

There's every reason to believe that will continue when Howard's former team, the Bears, who dealt him to the Eagles for basically nothing, come into town on Sunday. For starters, Sanders is coming off a shoulder injury he suffered on that aforementioned touchdown run. He practiced fully to finish out the week, but don't expect to see the Eagles overwork their rookie on Sunday, especially with a bye on the horizon.

Unfortunately, he'll be going up against a Bears defense that is currently fourth in the NFL in yards per attempt (3.6) and has held opposing backfields to 90 yards or fewer in five of their seven games this season. However — and this is a big however — the Bears have allowed 150-plus yards rushing in two of their last three games. Needless to say, both those games were losses for Chicago, who has lost three straight after starting the season 3-1.

If the Eagles learned anything in their win over the Bills, it's that they're a much better team when they establish (and stick with) the run. Sure, Carson Wentz is their best player, but even he's made more effective when the run game is keeping opposing defenses on their tows. Look for Pederson and Co. to build off last week's success with another healthy dose of Howard (and Sanders to a lesser extent) on Sunday.

Selfishly, as someone who has Allen Robinson on his fantasy team, I'd love to see him hit the over (and score a touchdown) on Sunday. Unfortunately, I don't have a ton of faith in that happening.

For full disclosure, I originally had this line set at 75.5, which is slightly above his season average. But when I ran this past Jimmy Kempski, he suggested that I move it up to 99.5 — and for good reason. The Eagles have allowed a 100-yard receiver in six of their eight games this year, with the two exceptions being the Jets and Bills games. And if anyone on the Bears can do it, it's going to be Robinson, despite the fact that he hasn't hit triple digits in receiving yards since his team's Week 1 loss to the Packers.

So, why do I think Allen will be kept in check this weekend? Well, for starters, I don't think Mitchell Trubisky is very good. Like, at all. He's averaging just 182 passing yards per game, so it's not like there's going to be a ton of chances for Robinson to get back over the hundred-yard mark. On top of that, despite how much they've struggled at times this year, the Eagles secondary is back, with all of their starters healthy for the first time since Week 3 of last season. That has to count for something, right?

The Bears are averaging 2.7 sacks per game so far this season, while the Eagles are allowing Carson Wentz to be sacked on average twice per outing. Neither of those numbers are eye-popping, so why are we highlighting this category for Sunday's game? Well, that's because rookie Andre Dillard will again be filling in at left tackle for Jason Peters — and, unfortunately, it looks like he'll be facing off against one of the most feared pass rushers in the entire NFL in Khalil Mack.

Here's what Jimmy Kempski wrote about that in his five matchups to watch for this week:

The Bears have a new defensive coordinator in 2019, but Mack still rushes off of both sides.

Andre Dillard has improved in each game he has played the majority of the snaps this season, but the Bears would be crazy not to primarily let Mack rush against him on Sunday, as opposed to Johnson, who has the aforementioned experience facing Mack, with far more success than most.

In the first three games Dillard has played, the Eagles have mostly put him on an island against the opposing pass rusher. That would be a big mistake against this team.

Clearly, that decision by the Eagles will play a big role in determining how many times Wentz is brought down on Sunday.

A lot could also depend on the score and flow of the game. If the Eagles are able to get out to a lead, something they've struggled to do for much of the season, they'll be able to run the ball more, rather than passing it a ton in an effort to play catch-up. That would obviously lead to fewer opportunities for the Bears pass rushers.

I'm going to go with two sacks for the Bears, which would be a great outcome for the Eagles. Anything more, and the Birds might be in trouble.

After a rough start to the season in the turnover department, following a rough 2018 season, the Eagles seem to be back on track when it comes to generating takeaways. They've come away with at least one in each of their last five games, including three in which they've forced multiple turnovers.

The Bears, meanwhile, despite their offensive inefficiencies, have been pretty good at protecting the ball, turning it over just eight times through their first seven games (compared to the Eagles, who have turned it over 14 times in eight games). HOWEVER, after turning it over just twice through their first four games, Chicago has committed multiple turnovers in each of their last three games — and two of those games came at home.

In a hostile environment on Sunday at the Linc, I expect the Eagles defensive front to get after Trubisky. Between that and a few playmakers now back in the secondary, I think we could see a strip sack (the Eagles seem to get one of those almost every week) and at least one interception in this one. If you haven't figured it out, I don't trust the Bears offense very much...

MORE: Upon further review: An exclusive look behind the scenes at NFL headquarters on game day