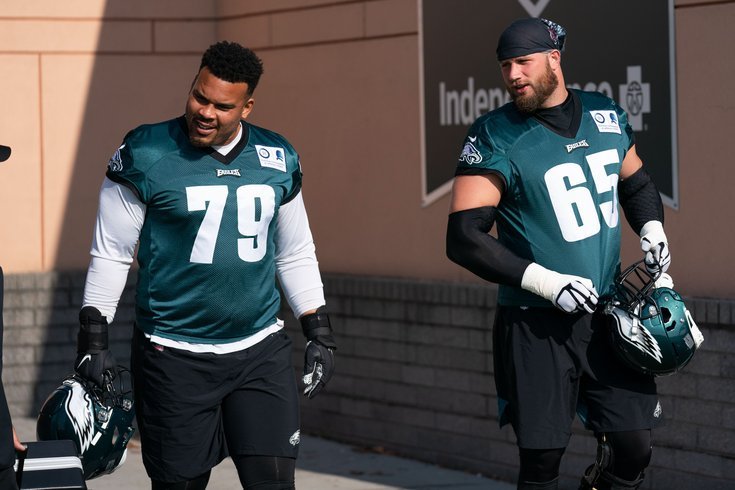 Philadelphia Eagles offensive linemen Brandon Brooks and Lane Johnson have developed a deep friendship in the years they've played together. According to interviews in a new NFL Films segment, their synchronization on the field starts with throwing up every Sunday.

Philadelphia Eagles right guard Brandon Brooks has been bravely transparent about his struggles with an anxiety disorder that formerly caused him to miss games on Sunday.

In the past, Brooks has spoken openly to PhillyVoice about how he would vomit uncontrollably in the lead-up to games with his former team, the Texans, and then when he joined the Eagles in 2016.

RELATED: How an obsession with perfection took ‘Mr. Eagle’ Brandon Brooks from huddle to hospital

Two Pro Bowls, a Super Bowl and a miraculous eight-month recovery from an Achilles tear later, Brooks is one of the most dominant offensive linemen in the NFL.

An NFL Films crew has been following Brooks around this season to spotlight his remarkable turnaround and the example he's been able to set for those who struggle with similar conditions.

The segment features interviews with Brooks, the coaching staff and right tackle Lane Johnson, who helps Brooks fortify the right side of the offensive line.

.@bbrooks_79 has overcome his anxiety with a little help from the big guy next to him on the @Eagles O-line.

You might not have guessed it, but Johnson admits he struggles with anxiety before games as well. He and Brooks have leaned on each other for support during their time with the Eagles and helped push each other to perform to their capabilities.

One ritual they have — and it's apparently unplanned — is that they both puke around the same time before the Eagles play on Sundays.

"This might be a little too much information," Brooks said, "but we actually wake up every game day and throw up at the same time. And if our rooms are close, I can hear (Johnson) through the vents. And then I'll text him like, 'Are you up, dude? Are you OK?' And he's like, 'Yeah, just throwing up.' And I'm like, 'Yeah, just doing the same thing.'"

"That's every game day," Johnson added. "It's our ritual. When I hear him throwing up, I know that he's ready."

Never has something so disgusting been so heartwarming. Thanks for sharing, guys.

The full NFL Films piece runs about 12 minutes and illustrates just how far Brooks has come since he received the proper diagnosis.

"Before, I would look at like, 'Oh God, here this comes. I guess I'm about to get crazy,'" Brooks said. "Now, I actually laugh about it."