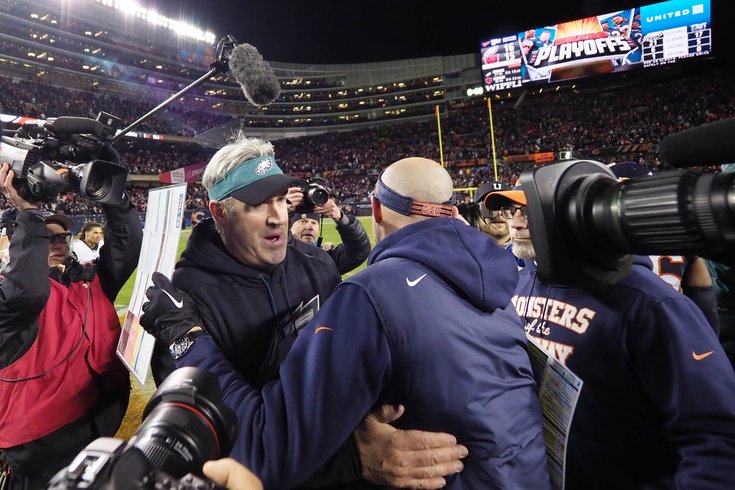 Give me Doug Pederson all day over Matt Nagy.

For the gambling degenerates, here are my Week 9 NFL picks. To note, the team logos indicate who I think will win the game, not cover the spread. At the end of the picks, I'll note a few teams that I like based on the spread.

49ers (-10) at Cardinals: The Niners are on pace for 62 sacks this season, and Kyler Murray is on pace to be sacked 54 times this season. I like the odds of that Niners' outstanding defensive front creating havoc all night in  the Cardinals' backfield.

Bears at Eagles (-4.5): The Bears were 12-4 in 2018, and they have already matched their loss total after just seven games in 2019. They come into Philly on a three-game losing skid, desperate for a win. Does that make them dangerous? Meh. Personally, I just don't think this team is good.

Offensively, their only good player is Allen Robinson, and the guy throwing to him has been one of the worst quarterbacks in the NFL so far this season. The offensive line is bad, and the remaining skill position players have been invisible.

Defensively, while certainly still very stout and armed with arguably the best pass rusher in the game in Khalil Mack, the Bears are not collecting takeaways the same way they did a season ago.

The improving Eagles defense should be able to handle this crappy Bears offense, and I trust Carson Wentz to make good decisions against this great-but-not-quite-elite Bears defense. Oh, and I'll take Doug Pederson all day over Matt Nagy. It should be ugly at times, but I see the Eagles ultimately winning comfortably, like they did this past Sunday in Buffalo.

Texans (-1.5) at Jaguars: The Texans' defense was really good for a while, but their offense wasn't. Now, their defense isn't so great anymore, but the offense is emerging. Like two ships passing in the night.

Titans at Panthers (-3.5): The Titans have been legitimately better under Ryan Tannehill somehow. I wonder what would have been if Chip Kelly was able to pull off that trade for Marcus Mariota.

Vikings at Chiefs (no line): There's no line on this game because it's unknown whether Patrick Mahomes will play or not. I reserve the right to change my pick to the Chiefs if he plays.

Jets (-3) at Dolphins: According to ESPN's "Football Power Index," the Dolphins have a 41.8 percent chance of winning this game. Here are their chances of winning the rest of their games:

In other words, this is their best chance at winning a game this season. So you know what? What the hell. I'll take them.

Colts (-1) at Steelers: A (-1) line is close enough to a pick 'em for my tastes, and I like the Colts a hell of a lot more than I like this Steelers team. I'll gladly lay a point here.

Lions at Raiders (-2.5): The "Overachieving But Still Not Really Good" Bowl

Browns (-3.5) at Broncos: It's hard to imagine this mentally soft person playing in Philly. He'd get eaten alive.

Baker Mayfield walked out of his media availability after getting into a heated exchange with a reporter.

Packers (-3.5) at Chargers: The Packers have nine players with at least 100 receiving yards, and for the first time in a long time, a very good running back in Aaron Jones. Combine that balance with Aaron Rodgers, and this team is very dangerous. Why is this line only 3.5 points when there will be more Packers fans in L.A. than Chargers fans?

Patri*ts (-3.5) at Ravens: While their schedule has been pathetically easy so far this season, the Patri*ts are still chbeating their opponents by an average margin of just under 23 points, winning six of eight games by at least three scores. The only one-score game they had was their six-point win in Buffalo, and their only two-score game was their 16-point win over the Jets in a game that was at one point 30-0.

Cowboys (-7) at Giants: The Cowboys already lost one game this season at MetLife Stadium, when they lost a terrible Jets team. Can the Giants make it 0-2? Nah.

After a couple of bad MNF matchups (Patri*ts-Jets Week 7, and Steelers-Dolphins Week 8), we finally have something worth watching (at least from a Philly perspective).

There's only one animal matchup this week, as three animal teams are on their bye weeks.

If you're just copying my picks each week, congratulations! You're still alive. Last week got a little scary there in the first quarter when the Dolphins jumped out to a 14-0 lead over the Steelers, but we made it through.

This is a tough week. First, let's look at the teams already used:

Of the teams at my disposal, it's either the 49ers on the road against the Cardinals, or the Seahawks at home against the Buccaneers. The Bucs are generally a bad team, but they have too many outlier games where their offense goes off for whatever reason. I don't trust them.

So I'll go ahead and use the 49ers and their awesome defensive front against a rookie quarterback, while I still can.