Eagles stay or go: Inside linebackers 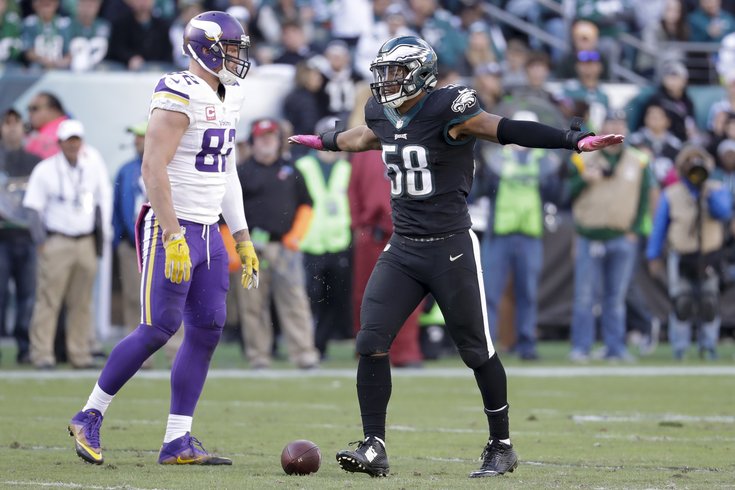 Jordan Hicks is the quarterback of the Eagles' defense.

The 2016 Philadelphia Eagles season is essentially over, so with one game remaining, we'll continue to look ahead to the offseason. As a starting point, let's take a look at each position and figure out which players will be back in 2017. Today we'll look at the inside linebackers.

In 2016, Hicks had 80 tackles, 1 sack, 3 INTs, 9 pass breakups, and four tackles for loss. He didn't make quite as many huge plays as he did his rookie season (considering he only played in eight games in 2015), but he certainly had a good follow-up to an impressive rookie season.

MORE ON THE EAGLES: Carson Wentz and Mike Trout have been hanging out over the holidays in New Jersey | Week 17 NFL picks | Eagles 2017 opponents | Jerry Jones says Cowboys won't rest starters vs. Eagles | In an instant, Carson Wentz shows he is The Answer for Eagles | Projecting the futures for the Eagles' 2016 draft class

Fearing a lack of depth as the regular season was approaching, the Eagles signed Tulloch, a former Schwartz fave, to a one-year deal worth $2.5 million. However, Hicks, Nigel Bradham and Mychal Kendricks stayed healthy all season long, so Tulloch's services weren't needed.

On the season, Tulloch played just 53 total snaps (6.1 percent) in the regular defense, and he did not play at all on special teams. The Eagles would be wise to find younger, cheaper linebacker depth in 2017.

We haven't been profiling players who did not make the 53-man roster, but we'll make an exception with Walker, who would have made it if he hadn't torn his ACL against the Pittsburgh Steelers during the preseason.

Walker will have to show that he has recovered fully from his injury. Assuming he will, Walker was looking like a Schwartz favorite during training camp and should be back as a backup middle linebacker to Hicks as well as a special teams contributor.