Projecting the futures for the Eagles' 2016 draft class 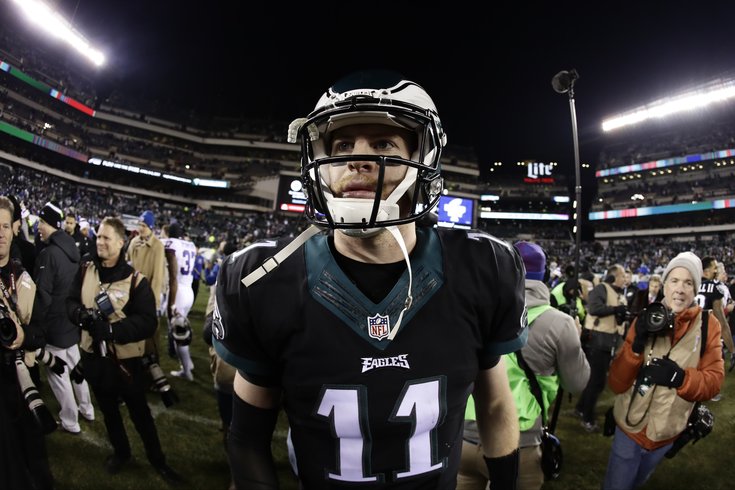 The sky's the limit for Carson Wentz.

The Philadelphia Eagles' 2016 draft class included eight picks, the first four of which were on the offensive side of the ball, the last four on defense. Five of those players saw game action with the Eagles as rookies, most notably, obviously, quarterback Carson Wentz.

Today we'll take a look at how those players project with the Eagles going forward.

In his rookie season, Wentz has shown a strong arm, physical toughness, leadership qualities, mobility, good pocket presence, and the ability to read defenses. That's an outstanding start for any rookie, much less one coming from an FCS school. Going forward, Wentz will have to work on his accuracy and his mechanics, which probably go hand in hand. He'll also have to cut out some of the poor decisions, which were understandable considering he's likely to finish the season with the second-most pass attempts of any rookie in NFL history.

In addition to an abnormal number of pass attempts, Wentz had his share of obstacles to overcome, throwing to arguably the worst wide receiving corps in the NFL behind an often shuffled offensive line. Despite that, Wentz showed maturity beyond his years, never becoming rattled and looking the part of a professional NFL quarterback with an unlimited ceiling.

Projection: Franchise quarterback (already there), and a major piece to build around for the future.

Seumalo didn't get a lot of playing time early, but he started three games late this season. Two starts came at right guard against the Packers and Redskins, while a third came at right tackle against the Ravens. He was up and down against the Packers, but had a terrific game against the Redskins. At Oregon State, Seumalo played LT, C, RG, and RT. The position he played most frequently during training camp and the preseason was LG. He is a rare offensive lineman who can play all five spots along the line, although the Eagles would probably prefer not to have to play him at tackle even though he held his own there in Baltimore.

It's only a matter of when (not if) Seumalo becomes a starter. The question is, where will he play? At Oregon State, while he played four positions along the offensive line, his primary position was center.

When asked what Seumalo's best position is, offensive coordinator Frank Reich replied, "I think originally we drafted him to play guard in the short term."

At guard, the Eagles have Brandon Brooks on a big-money deal at RG. He's not going anywhere. At LG, Allen Barbre was one of the pleasant surprises of the season, turning in a very good year both at LG and as a fill-in at RT. The Eagles have two ultra-versatile players in Barbre and Seumalo, one of whom will have to come off the bench, assuming the Eagles retain Jason Kelce in 2017.

Reich did not note the Eagles' plans for the long term, but center would certainly make sense.

In our "stay or go" series, we projected that Kelce will be back with the team in 2017. However, in 2018, Kelce will count for $7,200,000 against the cap, $6,000,000 of which the Eagles would save if they traded or released him. While it makes sense to keep him around for one more year in 2017, it would probably take a Pro Bowl-worthy type of season or a massive pay cut to retain him thereafter.

Projection: Starter-ready in 2017 at guard, long-term starter at center in 2018 and beyond.

On the season, Smallwood rushed 77 times for 312 yards (4.1 YPC) and 1 TD. He caught 6 passes for 55 yards and no scores. While his receiving numbers were unimpressive, Smallwood showed good hands in training camp, and the team believes he can be a contributor in the passing game.

Smallwood showed enough this season for the Eagles to feel confident that he can be part of the rotation in the backfield going forward, but not so much that he can be trusted as a three-down back at this stage in his career. One aspect of Smallwood's game that the Eagles will almost certainly work on extensively next offseason will be pass protection.

Smallwood had his ups and downs as a rookie this season, which is now over after he suffered an MCL sprain against the Washington Redskins. His best moments came in the Eagles' blowout win over the Pittsburgh Steelers when he ran 17 times for 79 yards and a touchdown. His worst moment came in the Eagles' loss at Dallas, when he inexcusably fumbled with a 10-point lead, leading to a Cowboys field goal.

In his first NFL action against the Redskins, Vaitai was severely overmatched by Ryan Kerrigan and the Washington defense, giving up pressure all day and forcing the Eagles to give him extra help. He continued to struggle for another game or two, before settling down and playing better.

While Vaitai's improvement was certainly encouraging, he lacked the kind of special moments you'd prefer to see if you're thinking about him as a potential future starter. Seumalo had them. Vaitai did not. Ideally, Eagles offensive line coach Jeff Stoutland will be able to coach up Vaitai to be able to play both left tackle and right tackle, so that he can be a swing tackle.

The Eagles thought they could bring Countess back to the practice squad at 53-man cutdowns, but Countess opted to sign with the Rams' practice squad instead. He was eventually called up to the Rams' 53-man roster, playing in four games, collecting 11 tackles and 1 sack.

The finger-wagging Mills certainly doesn't lack confidence, which is the trait that Jim Schwartz values the most in his cornerbacks. As a player, Mills struggled covering receivers on the outside, as he does not have ideal long speed to keep up with the NFL's fastest receivers.

There's a decent chance the Eagles move on both from Leodis McKelvin and Nolan Carroll this offseason, which would leave Mills temporarily as the team's top corner. Ideally, their plan will not include Mills as a starter on the outside. Instead, Mills may have the skill set to be a quality contributor as a slot corner, where long speed isn't as crucial, and Mills' confidence and aggressiveness can be put to good use.

Projection: Should be a slot corner. To be determined if Schwartz overvalues him.

The Eagles essentially "redshirted" McCalister after training camp, placing him on IR before the start of the season. He'll have a chance in 2017 once again to make the team. McCalister has a long way to go.

Back in May, we took a detailed look at McCalister's game. In short, he's a physical freak, standing at 6'6 with 36-inch arms and impressive athleticism. He's also very skinny, and extremely unpolished as a football player.

At Florida, McCalister was able to get to opposing quarterbacks with his size and athleticism, however, he lacked an impressive repertoire of pass-rush moves. Additionally, he didn't often finish tackles strongly, he was often slow to recognize fakes, and at 240 pounds he was easily moved in the run game.

In the pros, McCalister is going to be a situational pass rusher only, unless he can improve the rest of his game drastically. McCalister did not stand out (positively, anyway) in training camp. Surely the Eagles have spent the season trying to get McCalister to add weight to his frame so he can hold up to opposing NFL offensive tackles.

Projection: I would lean toward McCalister being on the practice squad in 2017. I just didn't see enough to be encouraged about in training camp.

Schwartz seemed to like Walker before he tore his ACL in the Eagles' preseason game against the Steelers. Walker was poised to make the roster as the backup middle linebacker to Jordan Hicks, seeing as the Eagles quickly signed veteran Stephen Tulloch two days after Walker's injury.

Assuming Walker can make a full recovery from his ACL tear, he'll be in good position to earn a roster spot next year.