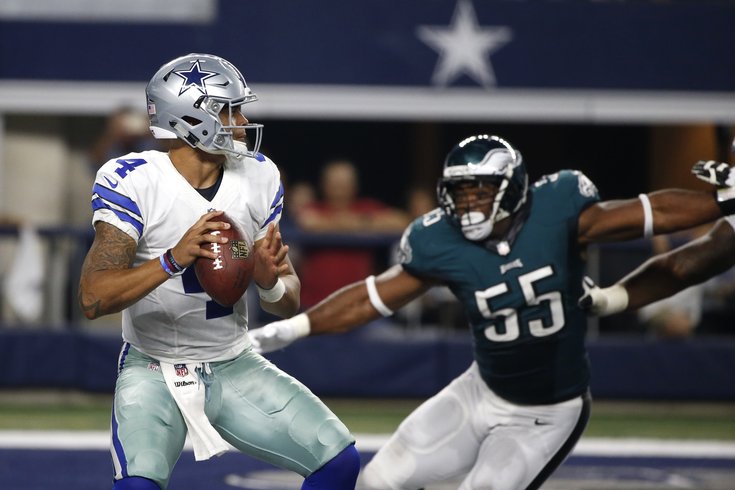 If the Cowboys play their starters in Philly this Sunday, they will be rolling the dice.

In their Week 16 win over the Detroit Lions, the Dallas Cowboys opted not to rest their starters, as quarterback Dak Prescott played the entire game. According to Jerry Jones, the Cowboys will once again play their starters against the Eagles on Sunday, as Jones wants Prescott to get as many reps as possible heading into the playoffs, via Todd Archer of ESPN.

"Look at what Dak Prescott learned tonight and what's now in his computer that wasn't there before tonight in terms of working with Dez in terms of executing the offense," Jones said. "With him being a rookie, we really need all these reps he can get, including any reps we get this week and next week, because we want him to be as educated and as well-prepared and have as much as experience as he can when we get in the playoffs."

That's risky. Against the Lions, Prescott took several hard shots in a game that occurred two days after the Raiders and Titans lost quarterbacks Derek Carr and Marcus Mariota for the season with broken fibulas. The Cowboys also had a scare when a Lions defender took Pro Bowl OT Tyron Smith's legs out on a run play to the edge, ending his night.

There was some thinking that the Cowboys might sit Prescott in favor of Tony Romo, who has not played a single snap this season. The Cowboys shot down that notion, again via Archer.

"We don't feel like that any game we'd get for him that him stepping out there running a few plays or series would be worth the risk," Jones said.

Romo has suffered three major injuries -- two broken collarbones and a compression fracture in his back -- in his last five games.

The Cowboys' third quarterback is former Eagles backup Mark Sanchez. If the Cowboys went into full rest mode at some point during the season finale, Sanchez could take the reins at quarterback.

From Philly's perspective, the Eagles have a chance to close the season with two wins against the top two teams in the NFC, record-wise, which would be a confidence boost for the organization heading into the offseason. A win over backups would certainly feel more hollow.