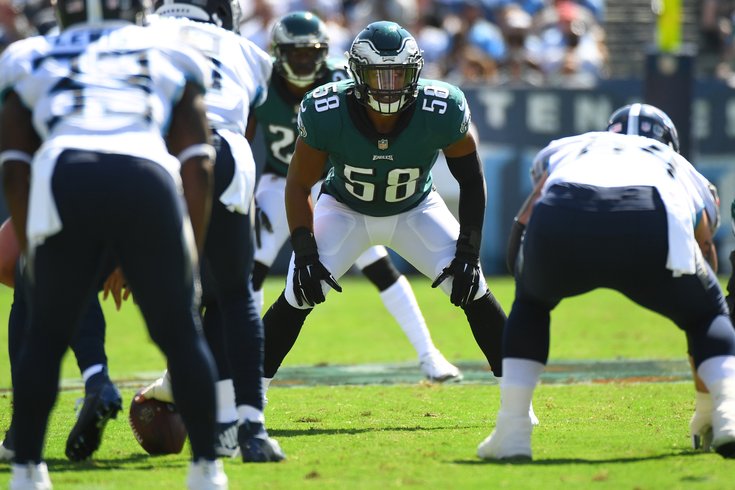 Jordan Hicks is a free agent this offseason.

Today we'll look at the linebackers.

Bradham was quiet during the first half of the season, but he came alive down the stretch and looked more like the player he was in 2017, even while playing through a broken thumb. He is a Schwartz favorite for his demeanor, instincts, and versatility. While his cap number is maybe a little pricey at $9 million in 2019, Bradham isn't going anywhere.

Hicks will be a free agent this offseason, and it will be interesting to see if a market develops for him. Early in his career, Hicks looked like he was going to be a playmaking beast. In his first 24 career games (21 starts) in the NFL in 2015 and 2016, Hicks had 135 tackles, 2 sacks, 7 interceptions, 1 forced fumble, 4 fumble recoveries, and 14 pass breakups. Those are outstanding numbers.

However, after a lackluster start to the 2017 season, Hicks tore his Achilles and was lost for the season. In 2018, playing in 12 games, Hicks had 91 tackles, 3 sacks, 1 fumble recovery, and 5 pass breakups. He did not force any fumbles or intercept any passes.

Because of his durability concerns, as well as production that has has fallen off considerably over the last two seasons, Hicks is unlikely to find any teams backing up the Brinks truck for him.

However, I still believe Hicks is a good player, particularly in coverage, which is what Schwartz prioritizes in his linebackers. He's also well-liked and well-respected in the locker room. I believe the Eagles will try to bring him back on a one-year deal, as long as some other team out there doesn't make a big bet on what Hicks was his first season and a half in the league.

While I do not yet think Grugier-Hill should be counted on as a starting (top two) linebacker yet, he is a special teams captain and a third linebacker with intriguing athleticism who should only continue to get better.

Gerry plays on special teams and is a competent reserve linebacker when asked to do certain things (like coverage), but his run defense needs significant improvement. He'll be back on a $645K cap charge next season.

Reynolds was a core special teamer in 2018, and he'll be a free agent this offseason. This is the exact type of player you hope to replace in the draft with youth, even if in the later rounds or the undrafted market.

The Eagles claimed Alexander off of waivers after 53-man cutdowns. He played 237 special teams snaps in 2018 and only had 4 tackles.

Bello was picked up by the Birds in-season, and appeared in three games as a special teamer. He had 2 tackles. He's under contract in 2019, so he'll get a look in training camp.

During OTAs, Worrilow tore his ACL on the same day that the team released Mychal Kendricks. Worrilow served as a quasi-starter for five years with the Falcons and Lions before joining the Eagles last offseason on a one-year deal. If they want, the Eagles could probably bring Worrilow back on a non-guaranteed veteran-minimum deal, and see how he looks in camp. That wouldn't be surprising. He certainly has a better résumé than Gerry, Reynolds, Alexander, and Bello.

#JimmyVerdict: I think the Eagles do indeed get Worrilow to come back on a veteran-minimum deal, and give him the opportunity to win a roster spot in camp.