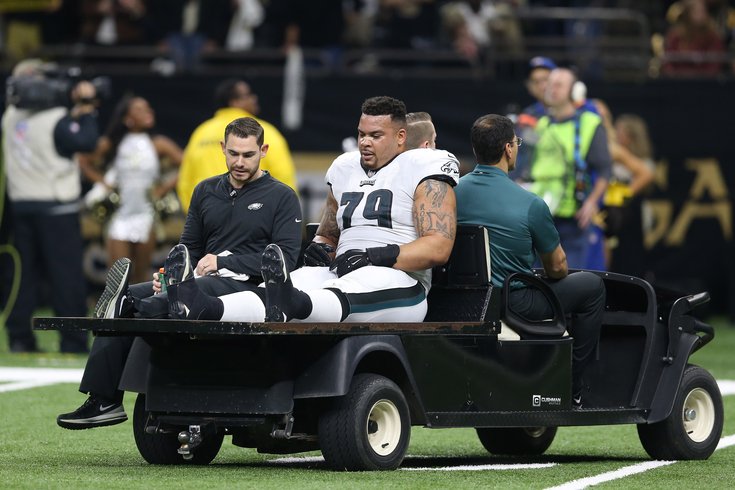 Brandon Brooks' injury could affect how the Eagles view their 2019 interior offensive line this offseason.

A couple weeks ago, a report -- not mine, to be clear ;) -- stated that Kelce was likely to retire at the end of this season. After the Eagles' loss to the Saints, Kelce acknowledged that he has pondered retirement, and has for years, but was clear that no such decision had been made yet.

Kelce is, in my opinion, the best center in the NFL. If he is not around in 2019, interior offensive line help would immediately become a major priority this offseason, though his importance to the team would be almost impossible to replace.

#JimmyVerdict: I think he plays at least one more season.

Brooks had another very good season and was rewarded with a second consecutive trip to the Pro Bowl. Unfortunately, in the Eagles' divisional round loss to the Saints, Brooks ruptured his Achilles, had surgery, and is going to be spending his offseason in rehab.

Realistically, that's a nine-month injury, which would put Brooks' potential return up against the start of the 2019 season. Obviously, he's going to be the starting RG whenever he returns, but his situation could affect how the Eagles will view the interior OL spots this offseason.

Seumalo replaced Stefen Wisniewski in the starting lineup at LG because they valued his length and athleticism. While I didn't think that was a major upgrade, I do think it ultimately turned out to be the right move, as Seumalo played well enough, and looks like a competent starter going forward.

Before Brooks got hurt and it was revealed that Kelce considered retirement, I would have said that Wisniewski was likely not to be with the team in 2019 as a backup, set to count for $3,708,334 against the salary cap. However, with Brooks potentially not being ready for the start of the 2019 season, the Eagles are likely to keep Wis around a while longer.

Prior is a massive human being with some athleticism who was a sixth-round pick of the Eagles in the 2018 NFL Draft. He had an excellent training camp, impressively taking on a lot of mental reps, playing both RG and RT. However, he struggled in the preseason games, and was on the team's inactive list for 17 or 18 games.

Still, like Jordan Mailata, Pryor has plenty of upside, and has been groomed for a year in the Eagles' system.

Warmack was a deep reserve who only played 49 snaps in 2018. With Pryor having been in the system for a year, he can likely take the place of Warmack, at a cheaper cost.