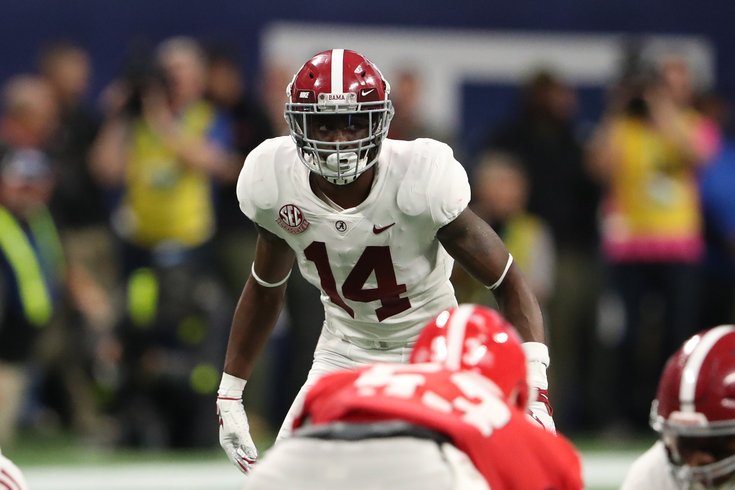 To my surprise, many around the country have the Eagles taking a defensive back, like safety Deionte Thompson of Bama (above).

On Thursday last week, we published our first Philadelphia Eagles-only mock draft of the offseason. Today we'll take a peek around at some of the national guys and see who they have going to the Birds at 25th overall.

To my surprise, there are a whole lot of defensive backs.

With free agents Brandon Graham and Chris Long potentially moving on, Philadelphia could add some pass-rush help here. At 6-foot-6, 241 pounds, Sweat is a rangy prospect who is athletically gifted. And he produced, racking up 22 sacks the past two seasons. Receiver is also a position to watch, as Golden Tate and Mike Wallace are both on the free-agent market.

#JimmySays: The concern here would be that Sweat has skinny legs, so there will be questions about his ability to hold up against the run in the pros. Do you bulk him up a bit to play 4-3 DE, or is he a 3-4 OLB? That would be a question the Eagles will have to figure out. I think he's a safer bet as a 3-4 OLB, but he clearly has very good pass rushing traits, as Kiper notes.

This would be the steal of the draft for the Eagles. Wilkins is a top-10 talent.

#JimmySays: Wilkins' primary position is at defensive tackle, but he also has extensive experience playing on the edge at defensive end at Clemson. Since the Eagles have major needs at both DT and DE, Wilkins makes a lot of sense as a versatile defender that Jim Schwartz loves.

The Eagles continue to fortify a strength. Super explosive, nice hands, wins his one-on-one situations consistently. For the Eagles, it’s just another guy to throw into the rotation. I like this pick. I like how he fits. I just don’t think you can have enough pass rushers if you’re the Eagles.

#JimmySays: At 6-foot-5, 285 pounds, Allen isn't going to be mistaken for a speed rusher like Von Miller, but like Wilkins above, he offers inside-outside versatility and has the ability to push the pocket with his sheer strength.

The Eagles' safety group could use a youthful member. Thompson wasn't a consistent play-maker for the Crimson Tide in 2018 ... but he's very rangy and equally as impactful stopping the run as he is in coverage.

#JimmySays: I agree the Eagles could use another young safety. However, the guess here is that Rodney McLeod will return in 2019, which would make Thompson a reserve only (or just a sub-package guy), and thus a bad use of resources. If McLeod is released by the team, then we'll talk.

Adderley made a name for himself over the final months of the season and the FCS standout could find himself among the first 32 players taken. He'll have a chance to prove himself at the Senior Bowl and the biggest question might be his size -- is he big enough to play safety over the course of an NFL season -- because every other aspect of his game checks all the boxes of what teams look for in a defensive back.

#JimmySays: In the second round? Sure. But again, it's just not a good use of resources with the team constructed, as is.

Injured No. 1 cornerback Ronald Darby is an impending free agent. They have some talented players behind him in Jalen Mills, Rasul Douglas and Sidney Jones, but none have really been able to put it together so far and become a shutdown defender. Deandre Baker is just 5-11, 185 pounds, but he plays like a bigger corner thanks to his great length and nose for the ball. He also can play several secondary spots, including nickel corner.

#JimmySays: I'm not sure I'd call Darby the "No. 1 cornerback." Regardless, even if Darby walks in free agency as I suspect his will, the Eagles have some nice depth in Mills, Douglas, Jones, Avonte Maddox, and Cre'Von LeBlanc, all of whom are young and on their rookie deals. I'd be shocked if the Eagles used a pick in the first round on a corner, even if I like Baker.

The Philadelphia Eagles secondary is much better than most would assume given the lack of huge names on the depth chart, but there is still a need for cornerback upgrades and depth, as seen in the divisional round loss to the New Orleans Saints.

Washington's Byron Murphy is only around 5'11", but he's a feisty cover man with excellent instincts and closing speed. He showed off his ball skills all season for the Huskies and was a thorn in the side of Pac-12 quarterbacks.

Some scouts might see Murphy as a slot cornerback, and that's a possible destination for him in Philadelphia. But no matter where he's lining up, he has the skills to make a major impact immediately.

#JimmySays: You mean the divisional round loss in which the Eagles' held the Saints' offense to 20 points, and were missing Mills, Jones, Darby, and McLeod? Three of those guys will likely be back in 2019.

Also, if Murphy is viewed as a slot corner, as noted above, then he's even less of a need, seeing as Jones, Maddox, LeBlanc, and Malcolm Jenkins can all play inside.

It was a nightmare season for the Eagles secondary, with injuries and lackluster play equating to one of the leagues worst pass defenses. Needless to say that is not a good place to be in this pass-heavy age, so those issues on the back end must be resolved. Any plan to do that will likely include the addition of at least one high-quality cornerback or safety to the mix.

Abram is a big, physical, aggressive safety with superb instincts who is at his best playing downhill, whether it’s against the run or even as a blitzer. Despite being an explosive athlete with decent ball skills who runs relatively well, Abram has some struggles in coverage but to his credit has made strides in this area. Abram also earns positive reviews for his intangibles such as toughness and leadership, showing the ability to anchor a secondary.

#JimmySays: Is it everyone else that's right, and I'm the crazy one? It's going to be a "historic" defensive line draft, the Eagles' two biggest needs are arguably DE and DT, and almost everyone has them taking defensive backs?

Also, Abram is fine as a player. I personally wouldn't take him in the first round even if I thought safety is a huge need, which it isn't until further notice.

Maybe this is too reactionary, but the Sunday’s playoff loss to the Saints showed that the Eagles need a true lead running back. Don’t forget that Jay Ajayi, who tore his ACL this season, is a free agent. If there’s a first-round back in the 2019 draft, it is Jacobs.

#JimmySays: I had Jacobs as the Eagles' second-round pick in my Eagles-only mock draft, version 1.0. A day later, Daniel Jeremiah had Jacobs going fifth overall!

So I don't really know what to think about where he'll go. I sure don't think he should go fifth overall, but seeing as I respect Jeremiah quite a bit, I'm clearly wrong that he's going to last until the Eagles' second-round pick.

Montgomery (5-11, 216 pounds) has emerged as a strong prospect because he finishes run strong and has shown some good hands and wiggle as a receiver. The Eagles have been a committee team under Doug Pederson, but injuries and ineffectiveness should make them consider one back who can do it all and complement Carson Wentz on every down.

#JimmySays: I think a running back would be fine at pick No. 25, provided he's an explosive playmaker, like Jacobs above is. I'm sure not going that route in the first round on a back who averaged a paltry (by RB prospect standards) 4.7 yards per carry over his college career.