Also, will Jalen Hurts indeed be the starter? 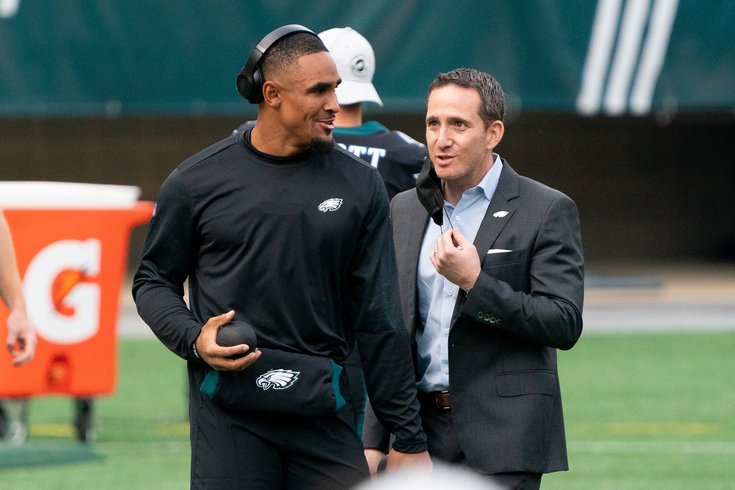 It wouldn't be an exaggeration to say that it was a shocking piece of news when it broke that the Eagles were trading the 6th overall pick — a selection they tanked purposefully to acquire — in the 2021 NFL Draft for the 12th pick and a future first rounder (plus another pick) from the Dolphins.

After all, there were a ton of desirable options on the board. The Eagles could have, in theory, gotten a talented quarterback like Justin Fields. They could have gotten a beast of a wide receiver in Ja'Marr Chase or a generational tight end in Kyle Pitts. While none of those players were guaranteed at No. 6, they were in play.

The Eagles, at first glance, surrendered the flexibility of moving back on draft day or taking a top talent that falls through the cracks a bit. But that's not how GM Howie Roseman saw it. Roseman explained his reasoning for the first time Wednesday afternoon, just eight days before the draft.

"The reason we traded back from 6 to 12 is because flexibility creates opportunity," Roseman said, flanked on either side by head coach Nick Sirianni and VP of player personnel Andy Weidl. "For us, having an extra first round pick, when you look back at things that are hard to acquire it's an extra first round pick...What we had to do is sit there and think, are there 12 guys in the draft we are comfortable with?"

Roseman clearly feels, for now at least, that there are 12 players on the board he is currently comfortable taking.

The trade was interesting because it came a mere minutes after the 49ers traded No. 12 and other assets to move up to get the Dolphins' third overall pick. The Fins then flipped that pick and a future first to Philly for No. 6.

"I'd say that when we got the call and we're having discussions with Miami and we had to figure out who they're trading with to assert the question about moving back," Roseman said. "Once it was San Francisco, we knew that there would be three quarterbacks off the board when we picked, and it allowed us to know more about what guys would be available if we moved back to 12."

Essentially, with three quarterbacks (and potentially five) going in the top 10, the Eagles will be able to extract immense value taking the 7th, 8th or 9th best non-QB at No. 12. Roseman also thinks the Eagles got a premium return for their pick, and with 11 picks now as ammunition on draft night (and four in the top two rounds in 2022), there is no telling what other deals may take place.

"The flexibility of having those picks also gives you opportunity, if you want to move up in a particular round," he said.

Should Eagles fans, then, expect that the Eagles could potentially move back up, with the Panthers and Lions picks, among others, rumored to be available on draft night?

"All of that planning and thought and conversations, they're happening right now," Roseman said, conceding that he's been talking to all of the teams picking in the first round. "We are talking to teams in front of us and seeing what that would look like, because when you're on the clock that's hard to do. You don't want to have a conversation like that on the clock."

The Eagles have already discussed how potential trades would look, and Roseman says that when it comes time to make a decision, he's essentially able to call another GM and ask, "Are you willing to roll? And then it's done."

"It's all contingent on a player being there, but we try and have our homework done," Roseman said. "The trade compensation is done before the draft."

Still having trouble understanding how front offices prepare for the draft? No need to worry, new Eagles' head coach Nick Sirianni can explain it.

Speaking of Sirianni, with the Eagles picking outside the top six, the likelihood of the team taking a first round QB to battle for the starting role with Jalen Hurts (and Joe Flacco) is pretty slim now. Does the move back indicate a commitment that the new skipper will start Hurts, at least in 2021?

"To name any starters at this particular time, we've been working with these guys for two days, my biggest thing is competition, it's my second core value, it's the team's second core value and we're going to have competition at every position," the coach said.

It's a generic non-answer, but it's noteworthy nonetheless, as there has been no commitment made to the presumptive starter with training camp a few months away.