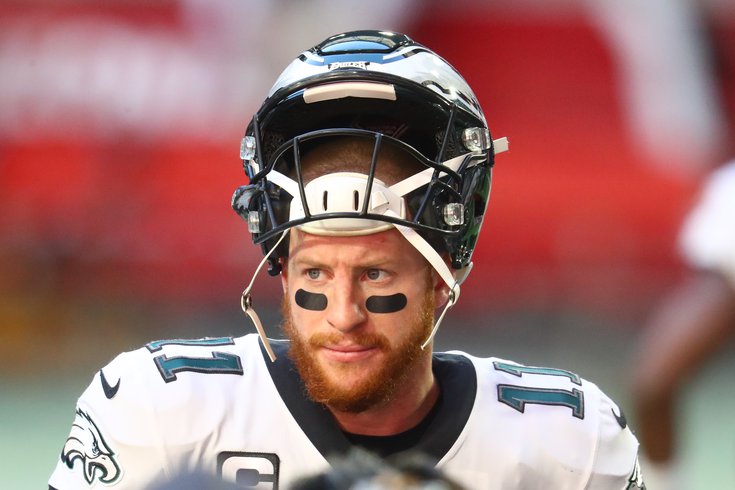 The Carson Wentz era in Philly is over.

The Philadelphia Eagles have traded quarterback Carson Wentz to the Indianapolis Colts, according to several reports, ending a relationship between the team and Wentz that had begun to sour during a disastrous season in which the Eagles finished 4-11-1, which was good for last place in one of the worst divisions in NFL history.

The conditions are as follows:

The conditional second-rounder in 2022 becomes a first-rounder if Wentz plays 75 percent of the snaps or 70 percent and the team makes the playoffs. https://t.co/quAYwcz7bd

In other words, Eagles fans will be rooting for:

Wentz's tenure in Philly was a roller coaster ride. A brief summary of each of his seasons with the team:

• 2016: After trading up twice prior to the 2016 NFL Draft to the No. 2 overall pick, the Eagles selected Wentz, who went from No. 3 quarterback to the starter in a blink after the the team was able to trade Sam Bradford to the Vikings for a pair of draft picks. Wentz had an exciting debut against the Cleveland Browns, and an encouraging rookie season overall. The Wentz Wagon was full, Wentzylvania t-shirts were printed, and lots of "11" jerseys were sold.

• 2017: Wentz was the best player in football for most of the season, and would have very likely taken home MVP honors, but a torn ACL and LCL in Los Angeles against the Rams ended his season. Nick Foles took over, initially struggled badly, before turning it on and leading the team to the city's first ever Super Bowl, as well as being named Super Bowl MVP.

• 2018: Wentz was not ready for the start of the 2018 season after spending all offseason rehabbing his knee, but he took over as the starter once again in Week 3 that season. Wentz's numbers looked good on paper, but he clearly wasn't the same player he was the year before. He would eventually suffer a back injury late in the season, and watch again as Foles led the Eagles into the playoffs, winning a wildcard round game against the Bears.

• 2019 offseason: Wentz and the Eagles agree to a four-year extension worth $128 million. Foles signed with the Jacksonville Jaguars in free agency.

• 2019: The team got out to a 5-7 start, and appeared unlikely to make the playoffs, but Wentz willed an injury-ravaged offense filled with practice squad players to an NFC East title, by winning the final four games, all over divisional opponents. In the first round of the playoffs, he was concussed on a first quarter cheap shot by Jadeveon Clowney, and had to give way to Josh McCown to finish the game.

• 2020 offseason: The Eagles drafted quarterback Jalen Hurts in the second round of the NFL Draft. Publicly, Wentz welcomed Hurts. Privately, he was reportedly unhappy with that selection.

• 2020: Wentz had a disastrous season, going 3-7-1, before being pulled during a game against the Green Bay Packers in favor of Jalen Hurts, who provided a spark, earned the opportunity to start another game, and then beat the 10-2 Saints in his NFL starting debut. In the 12 games that Wentz played, he was one of the worst starters in the NFL, posting the following numbers.

• 2021 offseason: Numerous reports emerged that Wentz's relationship with head coach Doug Pederson became fractured. Pederson was subsequently fired, though that wasn't necessarily just because of Wentz. After the hiring of Nick Sirianni to become the team's new head coach, Wentz reportedly still had issues with the organization, and no longer wanted to play in Philly.

There's no way to sugarcoat the development of this situation. It's a failure across the board. The Eagles, as an organization, failed to get the most out of the face of their franchise, and he'll now be playing elsewhere. Meanwhile, Wentz will finish his career in Philly with nine career snaps played in the playoffs, and after just one losing season, in which he was objectively bad, attempting to force his way out of town without even a hint of personal accountability. Both sides will lick their wounds, and move on.

By trading Wentz, the Eagles are taking on an unprecedented dead money hit of $33,820,611 on their 2021 salary cap, which is actually a savings of $852,925. Still, that is now the biggest dead money hit in NFL history by a country mile.

Using $176,000,000 as a temporary 2021 salary cap number (ultimately, it'll likely be a little higher), Wentz's dead money hit will take up 19.2 percent of the Eagles' 2021 salary cap. The benefit, however, would be that the Eagles are ripping off the proverbial Band-Aid, as Wentz would not count on the cap at all in 2022 or beyond.

The trade will not be official until the first day of the new league year, which is on March 17th.

Moving forward, what is the Eagles' quarterback situation?

Jalen Hurts is the only quarterback under contract through the 2021 season, so for now, it's just him. The Eagles do hold the sixth overall pick in the 2021 NFL draft, so debates on whether that pick will be (or should be) used on a quarterback will intensify.