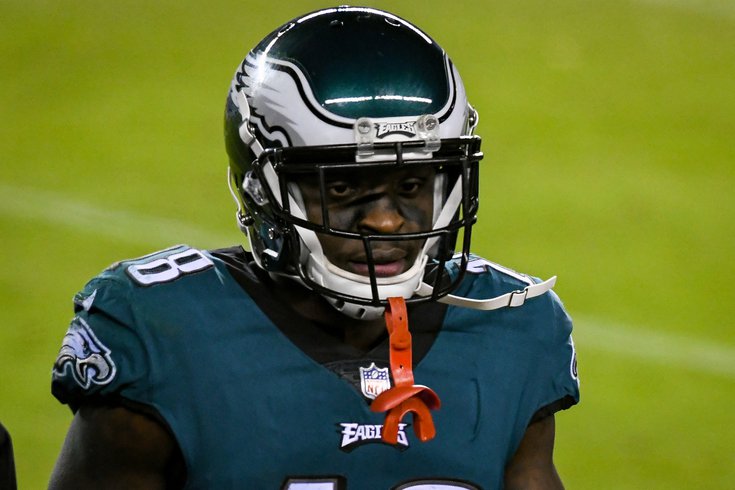 Jalen Reagor during the Philadelphia Eagles game against the Dallas Cowboys at Lincoln Financial Field in Philadelphia on November 1, 2020.

The Philadelphia Eagles held the first of two joint practices with the New England Patriots on Monday, which added a little juice to the monotony of training camp. As always, we have notes.

• Jalen Hurts got picked off twice in 7-on-7s, but he was sharp in 11-on-11s. He was particularly good getting the ball to the tight ends today, most commonly to Dallas Goedert. He also made several plays on the run, as well as deep down the field, notably to Jalen Reagor. It was probably Hurts' most accurate day of training camp, as he very clearly outperformed Cam Newton — who had a rough day, in my opinion — and rookie / former Bama teammate Mac Jones, who was up and down.

I also thought Joe Flacco had one of the best throws of camp today, when he dropped the ball in a bucket to Andre Patton near the sideline in the end zone. Perfect touch, perfect placement.

• Reagor had a great session during 1-on-1's. Some examples:

Jalen Reagor impressive during 1-on-1s vs. Patriots, including on this sideline grab. pic.twitter.com/SPrgJamFr6

Jalen Hurts and Jalen Reagor connect for a nice ball against the Patriots and Nick Sirianni likes it pic.twitter.com/bRxyAjt2pC

Jalen Reagor getting his slant on pic.twitter.com/O7IadyKTvA

This was Reagor's best practice of camp.

• Quez Watkins had another good day. And he's starting to make believers of his teammates. After the preseason game Thursday night, Hurts was bummed that Watkins won't be surprising anyone anymore after his great performance. And then today, Watkins earned a "WAY TO GO QUEZ!" from Jason Kelce after a nice catch along the sideline.

• DeVonta Smith is back! Well, sort of. He was a limited practice participant today. He should be a full go soon, and I wouldn't completely rule out a quick appearance in the second preseason game on Thursday.

• The Eagles' defensive line has a chance to be really good in 2021, and a big reason why is Javon Hargrave, who was a disappointment last season because of injuries, but has looked great all summer. He was disruptive again all day today, getting quick pressure up the middle. In a Patriots hurry-up session, Hargrave "sacked" Newton, but the rep continued, and Newton threw an INT to Eric Wilson in the back of the end zone. That was the Eagles' play of the day, in my opinion.

• Joint practices tend to make established veteran players perk up a bit, and I saw a heightened energy from Darius Slay today. He had a bunch of pass breakups, including one on Nelson Agholor. Slay was also involved in a collision in the middle of the field with Kendrick Bourne in which it looked like he landed on his shoulder. He remained down for a bit, before slowly walking off the field and getting looked at by trainers. (He seemed fine thereafter.)

• Agholor had a strong day today, by the way. He made a slew of catches in his return to the NovaCare Complex. And Jalen Mills had a chippy moment with Reagor and Jordan Mailata.

• Avonte Maddox seemed to be on the wrong end of a bunch of Patriots completions, to an assortment of receivers.

• Speaking of collisions, Derek Barnett dropped into coverage during an 11-on-11 session, and he lit up TE Matt LeCosse on a pass over the middle. It was a clean hit from Barnett, who has had some dirty plays in his past. LeCosse remained down for a while, and didn't look so great coming off the field.

• The Eagles' run game is going to be crucial to their success in 2021, and while Miles Sanders has had a number of drops throughout camp — he had another one today on an easy toss to the flat — he has looked good as a runner. The Eagles' OL opened up a huge hole on the right side that Sanders burst through.

While it would be great if Sanders could do a better job of catching the football, the team seems to feel like the gap between Sanders whoever you want to call the No. 2 RB is wide, hence Sanders' absence from the first preseason game.

• We mentioned above that the Patriots' quarterbacks weren't impressive, and the Eagles bailed them out a few times. Andrew Adams dropped two gift INTs, and it looked like Alex Singleton could have had one as well that he couldn't corral.

The Eagles' linebackers got into passing lanes all day, as Singleton, Eric Wilson, and Shaun Bradley all had pass breakups.

We are this every year at joint practices ... pic.twitter.com/tDFbLJqDP1

Just, lol. For context, the full away team roster at joint practices gets dropped off at the same time. It's not like they're going to stop for Rita's water ice before heading to the field. And if their "dynamic warmup" consists of standing around, but as a full team, then sure, "dynamic warmup."

Meanwhile, home team players trickle out to the practice fields from meetings/treatment/etc. The idea that this is some kind of great example that "tHe pAtRiOTs >>>>> eVeRYoNe eLsE" is hilarious. I'm skeptical that the Eagles will have a moment of self-reflection and "do things differently" because the Pats stood around as a full team before the start of practice.