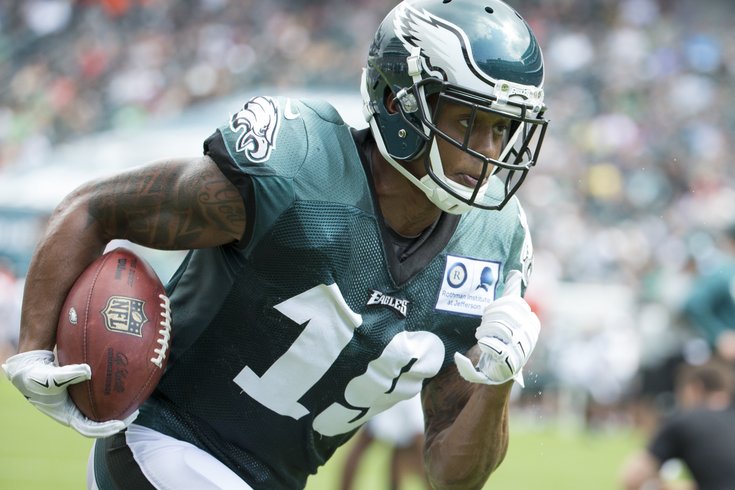 Chris Givens is a sleeper to get a decent number of snaps at wide receiver for the Eagles.

Today at Philadelphia Eagles training camp, it was a "10/10/10" day, which is a fancy way of saying the Eagles did a lot of scout team work as opposed to offense vs defense competition. In fact, to safeguard some of the folks who never covered the team under Andy Reid and have no idea what a "10/10/10" practice is, the Eagles placed the following cards on everyone's desk in the media workroom.

Noobs who missed the memo could report that fourth QB McLeod Bethel-Thompson was 1 for 20 today with 12 interceptions. That's not really accurate. In other words, it's a bad day for practice notes. Instead of publishing practice notes today, here are some random notes about the wide receivers, unrelated to today's practice:

Sports Illustrated's Peter King spent the day at Eagles camp yesterday, and he had the following to say about wide receiver Rueben Randle:

Philadelphia: Rueben Randle, wide receiver. He caught 188 balls in four years with the Giants, but he never was the deep threat or consistent wideout his second-round status merited. Though he made a brilliant one-handed catch in practice Saturday, he’s the fourth receiver at best here, and he may not make the 53-man roster.

While I won't disagree that Randle could be the fourth wide receiver, I'll disagree that he's not going to make the 53-man roster. If the Eagles cut him, they'll be the hook for $500,000 in dead money. While that's obviously not some kind of crazy, debilitating number, the Eagles have the most cash spending toward the 2017 salary cap in the NFL. Any money they can carry over from 2016 into 2017 would be ideal. But also, who's going to make the squad over him?

One player to watch as a sleeper to get a decent number of snaps at wide receiver is Chris Givens. This offseason, the Eagles were clearly trying to target speed receivers, and Givens has more deep speed than guys like Josh Huff or Randle. When asked who might fill the role of a player who can stretch the defense, offensive coordinator Frank Reich mentioned Givens.

"Chris Givens has good speed," said Reich. "He's a guy who has proven he can get vertical and make plays down the field in this league.

"The speed thing, it's funny. Definitely, there's raw speed. You can't coach it, you can't buy it. But there's certain guys who have a knack. There's a lot of ways to try to scheme things up to get guys down the field, so we have to do that. And then at times it's going to come down to somebody having the raw speed to get by somebody. There's not many times in this league that you're five yards behind people. It's finding the little windows, making accurate throws, as a receiver, using leverage, making good moves at the line of scrimmage, creating something down the field for them, so they can find the little window down the field."

Can Givens create a tiny bit more of a window than, say, Randle or Huff? Givens had a very productive season as a rookie, but his career has been on a downward trajectory since. His numbers:

The Eagles don't have much in the way of receivers who can stretch the field vertically. Givens ran a 4.41 40 at the 2012 Combine and he has a 16.6-yards-per-catch average for his career. He also has three years of experience playing alongside Eagles quarterback Sam Bradford. Here's how Givens' YPC average compares with the rest of the Eagles' receivers:

I wouldn't be surprised if Givens is ahead of Huff or Randle in the first preseason game.

Which undrafted rookie WR could stick with the practice squad, or more?

As every team does every offseason, the Eagles brought in a handful of undrafted rookie free agent wide receivers, and every year it seems someone gets hyped up quite a bit only to get cut. As we've stated previously, by my count, over the last 10 years, only Damaris Johnson (2012) and Hank Baskett (2006) made the team as undrafted free agent receivers, and in Baskett's case, the Eagles traded former third-round pick Billy McMullen for him.

So far, there hasn't been an over-hyped undrafted rookie WR, but the two who have probably done the most so far have been Marcus Johnson of Texas and Paul Turner of Louisiana Tech. Johnson is currently on the shelf with a quadriceps injury, but like Givens, he's a guy with speed. At Texas' pro day, Johnson ran a 4.38 40.