Now a scout with Eagles, Dawkins has sights set on 'something bigger' 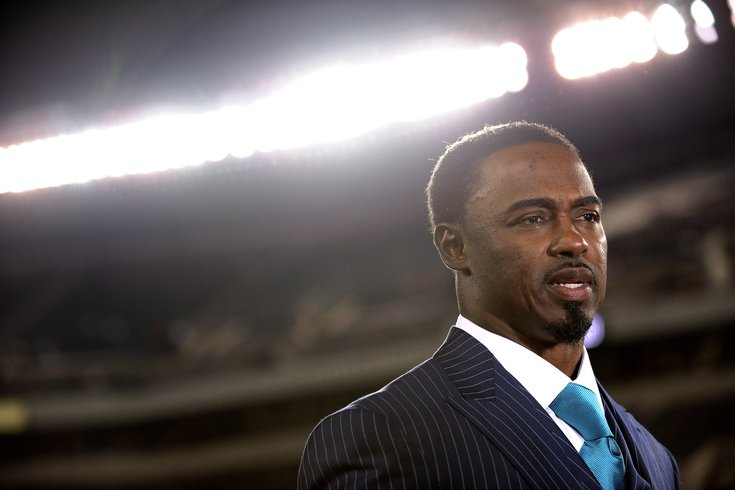 On Saturday morning, the Eagles announced that they had hired a new scout, news that typically wouldn't generate much of a reaction from even the most diehard fans. But when that new hire is former safety -- and a no-brainer for induction into the Pro Football Hall of Fame -- Brian Dawkins, well, that's a totally different story.

“It’s great. I’m very excited about this opportunity. I really am," Dawkins said following practice. "It’s something that I’ve been thinking about for a while and it just so happened that we were able to talk about it and get something done.”

With his kids now grown and the opportunity to return to his analyst gig at ESPN "not there at the moment," the 42-year-old felt the stars were aligning to bring him back to the organization that meant so much to him throughout his career.

But according to the man known best for his on-field alter ego, Weapon X, as well as GM Howie Roseman, this is only the beginning.

"This is something that I’ve been thinking about for a while, like I said," Dawkins added. "I didn’t know it would come to fruition this fast, but here it is. And sometimes, you’ve got to step out of your comfort zone to really see what you can achieve. So this is something that I’m really looking forward to see if it will move to something bigger.”

So what exactly does he mean by "bigger?" Coach? GM? Owner?

“Bigger is bigger. I don’t know what bigger is, I just know bigger is not where I’m standing right now," he said. "So whatever bigger is, then that’s what I’m shooting for.”

After working with his son's high school team the last few years, it's interesting that the former nine-time Pro Bowler is getting his first chance as a scout, unlike former teammate Duce Staley, who started off doing quality control for special teams before being named the team's running backs coach -- and one deemed valuable enough to remain on Doug Pederson's new staff.

For Dawkins, however, this is where he feels his talents would be most utilized. It will also give him a much broader view of how the organization works, from top to bottom.

“I think that it’s not just scouting. I’m trying to grasp the whole gamut of football operations, how a team is run," he said. "So I’m learning about the scouting part of it, the terminology and all those things. But sometimes, it’s you either have an eye or you don’t. And I’ve been blessed to have an eye to be able to see talent. So if I can help in that respect, I’d love to do that. But also, I want to learn everything about running a football team.”

And as it turns out, Dawkins has real reason to believe in his ability to evaluate talent. Not only was he doing in the later stages of his career -- he would evaluate the new guys to see how much he thought they could help the team -- but he's also been consulting for the Eagles, behind the scenes, in the years since his retirement.

When asked about how this all came together, Roseman revealed that Dawkins was not only a part of the Eagles coaching search back in January, but that he helped scout players ahead of the 2014 and 2016 NFL Drafts.

“We’ve been fortunate to be able to talk to Brian [Dawkins] about personnel, about some of the things we’ve been doing," Roseman said. "Personally, I’ve been doing it for the last three or four years — giving him evaluations on guys, listening to his thoughts on, starting with DB play — and really continued to pick his brain."

Some of the players they had Dawkins evaluate -- including some that he felt strongest about -- are currently on the team, although Roseman refused to divulge any specific names.

“There are guys on the team from this draft and from the 2014 draft that he was standing on the table for," he said. "And I think that when we look through those guys — obviously, we gave him guys [to evaluate] that we liked, not guys we didn’t so he would get discouraged when we didn’t draft them or sign them — he had passion for these guys. And for him to come out here and see the guys that he felt strongly of, just like our scouts, I think that also gives him hope that we’ll listen and take his perspective as part of the equation.”

Like Dawkins, Roseman believes this is only the beginning of his post-playing career in football. And it appears he expects big things from his newest scout, twice comparing him to Baltimore Ravens GM -- and Hall of Fame tight end -- Ozzie Newsome.

"I think the thing about it is, it’s not only limited to scouting for him," Roseman said. "He wants to get a global perspective of what we’re doing, whether that’s in player engagement, whether that’s in sports science, whether that’s in strength and conditioning, and how we’re building this team. And you’ve seen this work. Obviously in Baltimore, Ozzie, the job he did. And Brian’s got a great feel for that and he’s got leadership and presence that translates to upstairs as well.”

Considering he's the greatest living Eagle, Dawkins will have to work his way up from the bottom -- but being one of the best to ever play the game certainly won't hurt -- if he hopes to reach that level of success.

As you might expect, he has no problem proving himself and earning every opportunity that comes his way.

“Well, if you followed my rookie year, that’s what I did," Dawkins said. "All my career, every step of the way, I did the exact same thing — Pop Warner, high school, college, pros, and now, hopefully, front office. Work your way up.”

The life of an NFL scout is often an unglamorous one. But Roseman doesn't see that as a problem given what he's observed from Dawkins over the years. Furthermore, he thinks an ex-player's perspective is a much-needed one in the team's scouting meetings.

But this place means too much to me. It’s not about the people who run [the team], it’s about the place. It’s about the Eagle green. People can come and go, but this will remain the same.

“All you have to do is look back at his life and how hard he’s worked and how he’s put himself in uncomfortable positions," Roseman said. "I joke with him that all you have to do is see his body, how he’s working out now. It’s a lifestyle for him to work hard and to put himself in uncomfortable positions. He’s shown that he has a passion for it, that he loves talking about it, and that he has a knack for it. Just in the past few drafts, his evaluations, they’re good.

"And he looks at it through a different lens than we look at it. He’s able to come into our scouting meetings and say, ‘Hey, this is how I’m studying this position; this is how I’m looking at it from the ground level.’ Because a lot of times, we’re just the study of movement — we don’t know what the players are told to do, we don’t know what the play call is, we don’t know if they made a mental error. So scouting, a lot of times, is just the study of movement. And for him to be able to go there and see things that those of us who have never played the position won’t see, it’s great for us as well.”

Given how Dawkins' time with the Eagles came to an end -- unceremoniously, to say the least -- his return to the organization is proper punctuation for an offseason that seemed very much about family, from re-signing their own players to bringing back former players in new roles as coaches or, in this case, as a scout.

Last summer, during an extensive Q&A with PhillyVoice, Dawkins still seemed hurt by the team's decision to let him walk following the 2008-09 season.

"It took me a bit, man, to get over it," he added. "And not completely over it, but over it enough to keep my emotions in check..."

On Saturday, however, Dawkins seemed focused only on the future, one that will, unfortunately, be void of his patented Wolverine crawl out of the tunnel at the Linc.

“That stuff is gone. There’s nothing we can do to change any of those things," he said when asked if this helped heal any pain that remained. "And through those things, we have to look at the positive of things as well. I’m a positive dude, so I try my best to look at the positives. ... But this place means too much to me. It’s not about the people who run it, it’s about the place. It’s about the Eagle green. People can come and go, but this will remain the same. So that’s what drives me to want to do more for this organization.”

Not only is Dawkins joining former teammates like Staley and Greg Lewis, but Pederson as well. The two spent time together when Pederson was with the Eagles as a player in 1999 -- although he was gone by the time Pederson returned as an assistant in 2009.

That prior experience in Philadelphia is something Dawkins believes will serve the rookie head coach well.

“That’s huge because not everybody can have success in Philadelphia," he said of Pederson's previous stops in Philly. "Not every athlete can play in Philadelphia — they can’t. Some people can’t handle it; they can’t handle the toughness, can’t handle the tough love. So I think Doug having gone through it — plus the fact that he’s a more even-keel kind of guy — he can handle some of the bumps that he’s probably going to face, especially early on the offensive side of the ball.”

And now the team is banking on the fact that Dawkins' experience will pay dividends as well.

You better watch out, Howie, because if Dawkins winds up being anything like Newsome, you may wind up working for him one day.