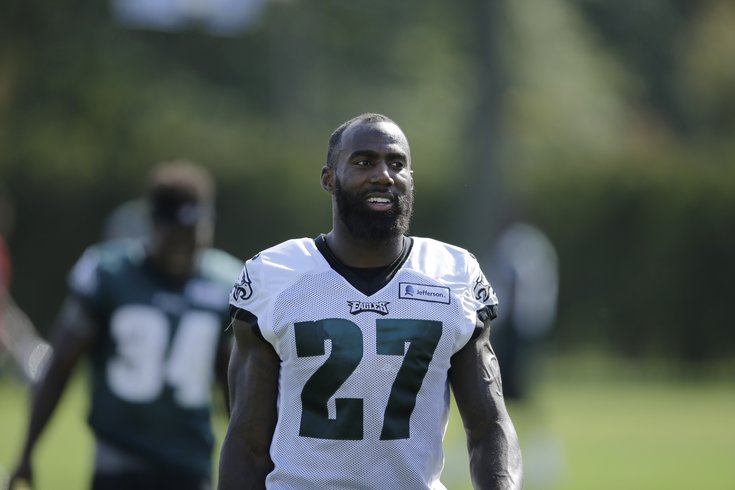 Malcolm Jenkins was two for two on interception attempts today.

And on the sixth day of Philadelphia Eagles training camp, there were pads. For the first time this offseason, Eagles players were in full uniform, and they got off to a physical start. Practice ran for more than three hours (that's way longer than normal) so there's a lot to get to. Let's just get right to it.

• On the very first play during 11-on-11's Stefen Wisniewski set the tone for the day when he absolutely blew up Bennie Logan right off the snap. It's rare that an offensive lineman will get ooh's and ahh's from the season ticket holders in attendance, but Wisniewski did just that.

Wisniewski has a mean streak, and I liked what I saw out of him today. Wisniewski signed a one-year deal in Philly this offseason after he being disappointed by the lack of quality offers in free agency. After his signing, he wasn't shy in saying that he was playing for his next deal. He certainly seems like a motivated player.

• During a 2-on-3 session (2 WRs vs 3 DBs), Malcolm Jenkins was able to haul in two interceptions. This offseason, Jenkins worked on capitalizing on more big play opportunities. In other words, he worked on catching the football. Jenkins also had a big hit on Chris Givens over the middle during team drills.

• We've already noted this, but Jordan Matthews has been really good this offseason. Matthews contributed to the Eagles' league lead in dropped passes a season ago, but he's catching everything so far this summer. On one play down the field, Chase Daniel delivered an inaccurate throw, but Matthews made a great adjustment on the ball and was able to out-jump two defenders to make the catch.

Later, he had a nice diving grab while working against rookie safety Blake Countess. What made that play impressive was that Matthews' feet got tangled with Countess', but he was able to regain his balance and then lay out for the ball while keeping his concentration. Well done.

• Alex McCalister struggled in run defense, which was to be expected. He was handled by rookie RT Halapoulivaati Vaitai, and then later was guilty of illegal hands to face against TE M.J. McFarland after McFarland gained leverage on him.

• Vinny Curry got pressure working against Lane Johnson on one play during 11-on-11's. Meanwhile, second team DE Brandon Graham got a few pressures against Dennis Kelly. So far this offseason, Curry and Graham have worked exclusively at LDE against the right tackles. Curry and Graham could pose mismatches against a number of RTs the Eagles will face this season. For example, here are the starting LT/RT combos in the NFC East:

The LTs in the rest of the NFC East are a lot better than the RTs. Jim Schwartz said that Curry and Graham will eventually move around, which we'll continue to monitor.

• Trey Burton had an outstanding day. He made several difficult catches all over the field. Some were leaping catches, some were sliding catches, and some were passes he was able to hang onto despite being popped while trying to making the catch. He's going to actually get playing time this season, which is long overdue.

• I've stated repeatedly in regard to rookie CB Jalen Mills that it's a different game once you strap on the pads. Mills has been excellent in coverage throughout the spring and summer, but one of the deficiencies in his game at LSU was that he would occasionally shy away from hitting. Not so today.

On the fist day in pads, Mills stoned Wendell Smallwood with a nice pop, and then later he lit up Givens, who was trying to block him. On a run play, Givens came in motion and stopped just outside the tackle, where he was protecting against backside pursuit. Mills aggressively got under Givens' pads and jacked him up. It was inconsequential to the play itself, which almost made me appreciate it even more. Givens staggered off hurt and did not return for a bit.

On the downside for Mills, on one play he fell down while trying to cover undrafted rookie Cayleb Jones. Jones made the catch and ran down the field while Mills slowly got up and watched him. That brought out the demon in defensive backs coach Cory Undlin, who lit into Mills, screaming "Get the f*** up and run!" Undlin continued to berate Mills for a solid minute or so, letting Mills know that his stock had been climbing, but now it was falling.

It reminded me a little of when the drill sergeant in Full Metal Jacket screams at Private Pyle as he climbs up the obstacle and then right back down. *Very NSFW*

• Speaking of Undlin, He's coaching up a player after nearly every single play. That was not possible a year ago, when there was no time in between plays.

• I love the way Carson Wentz climbs the pocket while maintaining his vision. Typically, when quarterbacks are forced to quickly move up in the pocket, their vision will narrow to the middle of the field. They're less likely to make throws to the sideline, as their forward momentum is carrying them to the center of the field.

One thing I've noticed so far is that Wentz still uses the entire field when he steps up in the pocket. He can contort his body on the run and throw sideline to sideline.

• Nolan Carroll had a nice pop on Josh Huff while trying to bring in a pass, which fell incomplete. Later, Huff couldn't bring in a pass over the middle while working against JaCorey Shepherd. He also had a drop over the middle in traffic. The one highlight Huff did have was a diving catch on a pass from Wentz way down the field on what looked like a post pattern. But overall, Huff was more down than up.

• Jason Peters was getting breaks today. As an aging veteran, he was allowed to sit out a few 11-on-11 sessions. That's not something that would have ever happened under Chip Kelly. In his absence, Matt Tobin got reps at LT with the first team offense.

• Nelson Agholor had a nice day. He beat Rowe deep early in practice, and later had nice over the head sliding catch down the sideline. Agholor has not impressed much until today, so maybe a positive day will get him going.

• One of my dark horses to make the practice squad is undrafted rookie RB Cedric O'Neal. He has quietly impressed, showing decent speed and hitting holes.