Howie Roseman says the Eagles could keep Sam Bradford in 2017 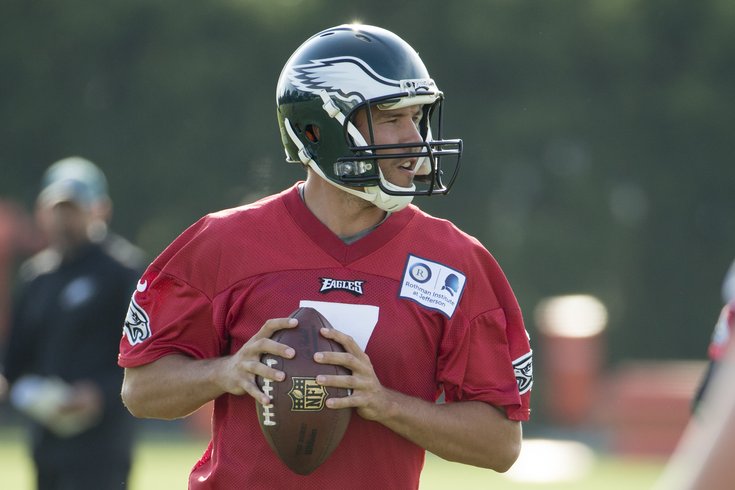 The Eagles COULD keep Sam Bradford in 2017, the same way you COULD continue to pay $100/month for dial-up internet service instead of buying food.

When the Philadelphia Eagles traded up to the No. 2 overall pick in the 2016 NFL Draft to select a quarterback, it became instantly clear that Sam Bradford's time in Philly would be short.

When they handed out contract extensions to Lane Johnson, Zach Ertz, Brent Celek, Malcolm Jenkins, Vinny Curry, Fletcher Cox, and Darren Sproles, while also dipping into the free agent market for players like Brandon Brooks, Rodney McLeod, and Nigel Bradham, the eventual dispatching of Bradford has almost become a necessity.

As we stated back in June, the Eagles have the NFL's least amount of available cap space in 2017 and 2018, and it really isn't even all that close.

Unquestionably, the Eagles are going to have to part with some players next offseason to give them room under the cap. The most likely player with whom the Eagles will say goodbye is clearly Bradford.

Yet, when asked if the Eagles had to fit Bradford on the cap for 2017, could the Eagles possibly do it, Roseman emphatically said they could.

"No question," said Roseman. "No question. We're not in the business of losing good players. That's our job to figure out scenarios and figure out ways to do that, and we've gone through all those scenarios. It's tighter than it's been since I've been here, but we also felt like it was an opportunity now with where our players were that the longer we waited, the more players we'd probably have to lose. Time is never helpful in these things. We went into it knowing that, but, for sure."

Certainly, the Eagles could keep Bradford. They would just have to cut a bunch of other good players and essentially sit on the sidelines during free agency. The only way they would keep him is if he's Super Bowl MVP (lol) or if Carson Wentz loses his right arm in a wood chipper accident, which I suppose is entirely possible in North Dakota.