Howie Roseman responds to 'worst GM in the NFL' ranking 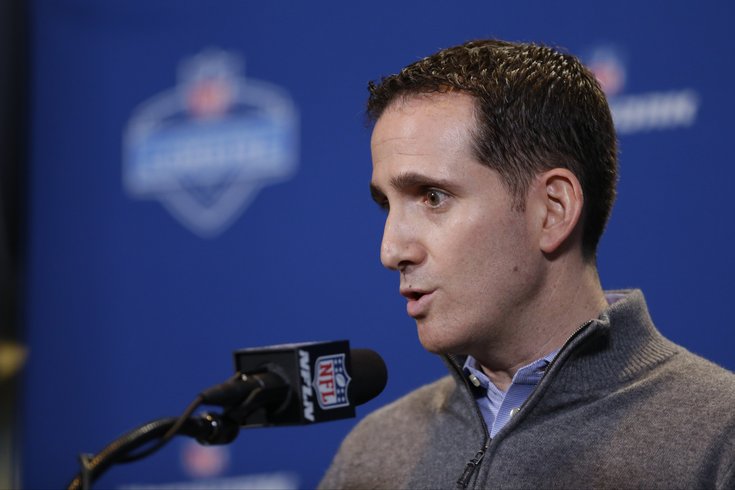 A few weeks ago, The Sporting News published a ranking of the NFL's general managers from 1-32. (Warning: It's a slideshow). The best GM? The Denver Broncos' John Elway. The worst? The Philadelphia Eagles' Howie Roseman.

Appearing as a guest on the Mike and Ike show on 94.1 WIP Friday afternoon, Roseman was told of his ranking and asked for his opinion on it, to which Roseman optimistically replied, "Nowhere to go but up!"

The reasoning for The Sporting News' ranking was as follows:

Roseman returns to the roost after being displaced by Chip Kelly, and the pressure to come though was immediately back. He spent much of the offseason trying to clean up Kelly's messes but created a different one at QB, spending too much money on Sam Bradford and too many draft picks on Carson Wentz.

A look at some of the things Roseman did this offseason:

• Trading DeMarco Murray for literally anything was an enormous win. Frankly, I can't even imagine what was being said on the Titans' end of this deal. "You mean to say that we can have a bad, slow, massively overpaid complainer at an incredibly easy position to find talent, and I have to give you something to get him? Deal!" For "losing" Murray and his awful contract, the Eagles moved up 13 spots in the fourth round.

• When Roseman traded Byron Maxwell and Kiko Alonso, the Eagles were able to dump a bad contract (Maxwell) while throwing in a player who was downright bad a season ago (Alonso), and for those "losses," the Eagles moved up from 13 to 8 in the first round of the 2016 NFL Draft.

• There was no way the Eagles were going to keep Mark Sanchez around after handing out lucrative deals to both Sam Bradford and Chase Daniel. Sanchez was set to count for $5.5 million against the cap in 2016. Had the Eagles released him, they would have saved $3.5 million of that. By trading him, they saved $4.5 million. That alone was incentive enough to trade him, but the Eagles will get the Broncos' seventh round pick if Sanchez makes the team, which will become the Titans' sixth round pick if he starts at least four games.

Those three moves alone were masterstrokes of turning trash into something. Not to mention, if you hate the signings of S Rodney McLeod and OG Brandon Brooks, speak now or forever hold your peace.

In 2017, there's a very low probability that Sam Bradford will be on the roster. Assuming the Eagles are able to trade him next offseason for literally anything, here is how the quarterback cap numbers will look over the next three years:

The cost of the Eagles' quarterbacks is currently eighth in the NFL in 2016. It will be right around the middle of the pack in 2017 if the Eagles can deal Bradford, and then among the league's lowest numbers in 2018.

After seeing how the Eagles' offseason has played out, it certainly wasn't a picture of perfection, but the allocation of dollars to the three quarterbacks on the roster is justifiable when viewing it over the long-term instead of just in a narrow, short-term window.

As for trading up to acquire Wentz, was the cost high? Sure. But the bottom line in the NFL is that you either have a quarterback, or you don't, and if you don't, you have no chance. Would the Eagles have been better served to stick with Sam Bradford for the foreseeable future? In my view, heeeeellllll no.

Wentz will ideally be the starting quarterback in 2017 and beyond, Daniel will be slated as the long-term No. 2, and Bradford the guy who can maintain short-term competence, albeit at a high cost.

If Wentz pans out (which of course isn't a certainty), the Eagles will not be included among the 16 or so teams who could be shopping for a new franchise quarterback in the not-to-distant future. Many of those teams may have to give up a hell of a lot more to get their guy than the Eagles did this offseason, or have a disastrous enough of a season to draft one high.

Howie Roseman's resume is far from stellar, but the worst GM in the NFL? Get out of here with that nonsense.