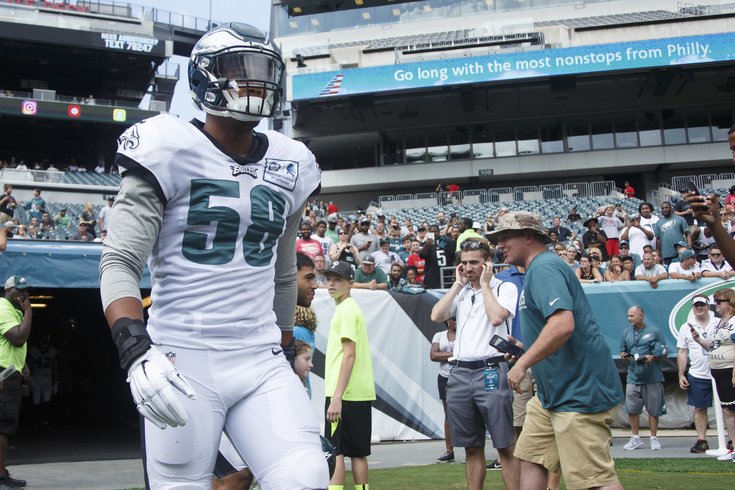 The Eagles will do what they can to keep LB Jordan Hicks healthy for the season.

During the first week of Philadelphia Eagles training camp, head coach Doug Pederson has tried to do something that Chip Kelly never did -- he has given a healthy player a little extra rest.

Jason Peters, who is now 34-years old, has gotten a number of series off, and reserve Matt Tobin has filled in for him at first-team LT. Peters won't be the only one.

"There will be some other guys, guys on defense, because we do such a high tempo, fast pace, we want to get in and out of the huddle and do some things," said Pederson. "There will be some other guys that we'll – as we go, take some time off. I don't want to say time off. I mean rest them. Keep them healthy, keep them fresh. Got to get them ready for September 11th."

So who will they be?

"Well, you're looking at your corner positions," said Pederson. "Leodis [McKelvin] is a guy that he doesn't need a ton of reps over there. You've got to monitor guys like – I think the guys that are coming off injury, you know, maybe a Jordan Hicks, you take a look at him and you can say, ‘Hey, let's rest him, back him down and get him ready for the regular season.’

"Obviously now Ryan Mathews with his situation, he'd be another one because of his nature, his style of running, which is very physical, being able to pull him back just a little bit. We did the same thing with Jamaal Charles in Kansas City, and when we had Brandon Albert there a couple years ago, and you get some of these guys, these veteran guys, a Justin Houston that we had in Kansas City, the ability to just shut them down for a day and keep them fresh for the season."

As Pederson noted, if you're getting extra rest, there's a reason. Hicks and Mathews, for example, have a history of injuries. But more importantly, Pederson didn't note a fairly obvious point -- It also means that the team highly values those players.

One player who could come as a surprise among the "rested list" could be McKelvin, who was something of an afterthought when the Eagles signed him in March. On Saturday, defensive coordinator Jim Schwartz spoke about McKelvin as a player.

"I thought he really came on to his own the year before I got to Buffalo, 2012," said Schwartz. "He had a really good year, and the year I was there he was playing at a Pro Bowl level I thought until he broke his leg, ankle, whatever it was in the Miami game. So, what happened before that, I really can't speak to. Last year was an injury thing. He started on the PUP, and then when they came out – that was a team that was blessed with a lot of corners."

Barring injury, McKelvin is a lock to start for the Eagles this season.

And then there's Mathews. Some have wondered if Mathews could be unseated as the team's lead back. Don't count on it. Again, barring injury, Mathews is the clear-cut starter at running back and is in no jeopardy of losing that distinction anytime soon.