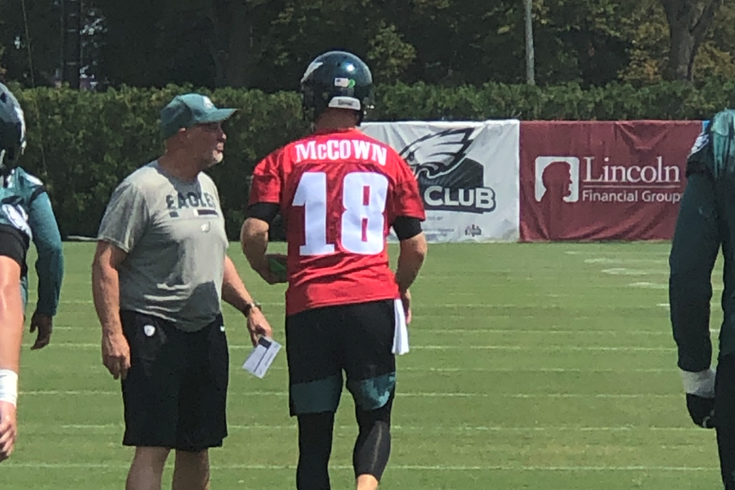 Obligatory picture of the new guy at practice.

Philadelphia Eagles training camp is technically over, but we (the media) were allowed in one last time for a full Eagles-only practice, before the team conducts joint practices with the Baltimore Ravens on Monday and Tuesday. It was a 10-10-10 practice, AKA a noncompetitive practice in shell and shorts. Still, as always, we have notes.

• Prior to practice, Doug Pederson held a press conference, and as you would expect, he was peppered with questions about new quarterback Josh McCown, and what his signing means. The Cliff's Notes:

Not sure I completely buy all of that, but whatever.

• McCown spoke as well. He said that the Eagles were one of a small handful of teams he would have considered coming out of retirement to play for, mainly because he feels like it's a potentially winning football team. He also acknowledged that during his long NFL career, he hasn't played for many Super Bowl-contending teams.

I was curious to see how bad the teams he has played for have been, so I took a look. It's not pretty:

*In 2008, McCown was on the Dolphins' roster during training camp, but he got traded to the Panthers before the start of the season. The Dolphins went 11-5 that year.

The only team in the chart above that made the playoffs was the 2008 Panthers, who were bounced in their first playoff game by the Cardinals.

• McCown was asked if he's been keeping in shape after he retired, and he answered that just generally speaking, he's a very active person, and has been playing basketball. In our first glimpse of him in practice, he was throwing the ball fine. Tight spirals, looked like he belonged, etc.

• On the injury front, DE Josh Sweat is now day-to-day with a knee injury. While "day-to-day" would indicate a less serious injury, anything involving Sweat's knees is noteworthy.

On the bright side, CB Ronald Darby and DT Hassan Ridgeway both participated in 11-on-11's today. Darby took the place of Sidney Jones on the first-team defense with Rasul Douglas and Avonte Maddox.

• Again, it wasn't a typical competitive practice, but Carson Wentz dropped in a pair of gorgeous touch passes along the sideline to Josh Adams and DeSean Jackson. Jackson actually bobbled his, leading to an interception, but the throw was money.

• And you know who else looked pretty good throwing the football today? Clayton Thorson! He hit on a nice deep ball to DeAndre Thompkins, he lofted a well-paced 50-50 ball to Carlton Agudosi in the back corner of the end zone, and he made several other accurate throws in the intermediate parts of the field. His chances of making the team aren't so great anymore, but he is going to get plenty of work the rest of the way in the preseason.

• This has nothing to do with today's practice, and I don't want to make a mountain of a molehill, but one thing I'd be wary about if I were the Eagles is Andre Dillard's early tendency to pay attention to what people on the outside are saying and/or thinking. After the Jaguars game, Dillard, who hasn't spoken with the media since those skirmishes happened, just flat refused to talk about them.

Practice fights happen. They have for as long as football has existed. They're really no big deal. It would have been easy to just laugh them off, or say that those things happen when you're competing, etc. etc. Flat refusing to talk about it felt like an odd choice.

Also after the Jags game, on Snapchat (h/t Eagles reddit), Dillard bristled at the notion that he was at fault for the hit that knocked Kessler out of the game. In his post-game press conference, Pederson — as well as several current and former offensive linemen on Twitter — placed the blame on a bad read by Kessler, and absolved Dillard of any blame.

Dillard has had a very good camp, and has looked good in each of his first two preseason games. His play has largely been well reviewed. I'm curious how he might react if he has a bad showing and real criticism comes his way.

One of Nick Foles' strengths was tuning out what people were saying about him when he wasn't playing well, and simply going about his business. Sometimes that's easier said than done, and the Eagles would be smart to tutor Dillard on how to handle what can often be a harshly critical environment here in Philly.

• Actual practice notes should be plentiful the next two days with the Ravens in town.