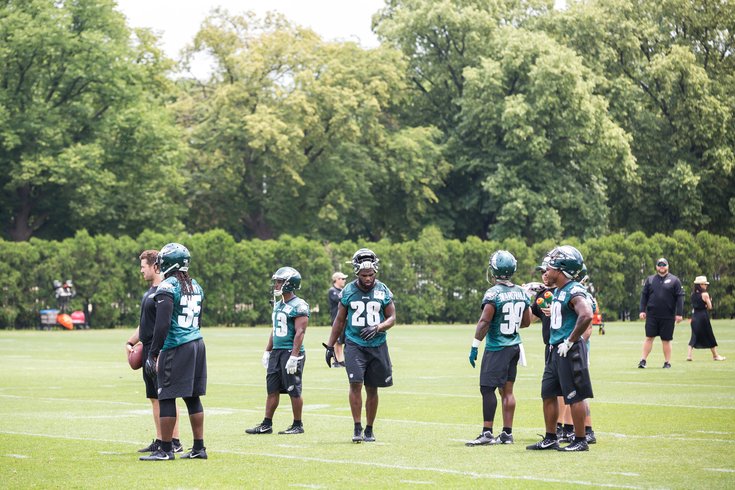 The Eagles will likely go with a committee approach at running back this season.

On July 24, there will be football again, as quarterbacks, rookies, and select veterans will report for training camp. Leading up to camp, we'll be taking a look at each positional group. On Monday, we started with the quarterbacks. Today we'll take a look at the running backs.

First, here's a look at the running backs likely to make the final 53-man roster:

The Eagles have an interesting group of backs. Before they signed the 6'0, 250-pound Blount, their top three backs averaged a height and weight of 5'8, 189:

Sproles has been a skilled receiver for the entirety of his career in the NFL. His value is in creating mismatches against opposing defenses, and obviously, on special teams. Pumphrey and Smallwood both showed glimpses of receiving ability in college as well as offseason practices, but they will have to prove that they can be effective that way in games. They will also have to show that they can be trusted in pass protection.

Blount, meanwhile, gives the Eagles the bruising back element that they would otherwise be missing. He was especially good last season in third- and fourth-and short situations, which is an area where the Eagles' offense struggled last season. Blount could also have added importance to this team that he may not elsewhere because of Doug Pederson's penchant for gambling on fourth down.

Pederson would prefer a three-down back who can run inside, run outside, catch, and pass protect. He doesn't have that, and running back may once again be an offseason need after the 2017 season.

Still, this group can be unspectacular but effective if the Eagles can find the right balance. The trick for the Eagles' offensive coaching staff will be finding a way to utilize all the strengths of their backs, while not being predictable in calling plays. That's easier said than done.

Training camp could reveal hints as to how the Eagles intend on using their diverse committee of backs.