Eagles vs. 49ers: Five matchups to watch, when the Eagles have the ball 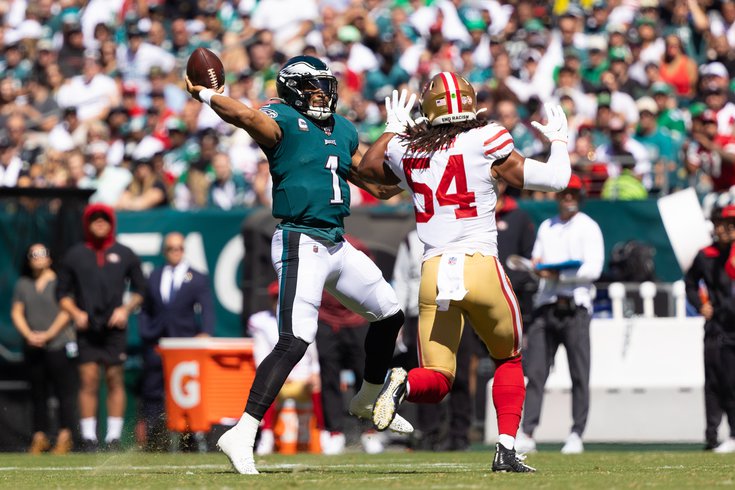 Fred Warner and the 49ers defense will give Jalen Hurts his greatest mental test of the season.

For the last couple of months it felt like the Philadelphia Eagles and San Francisco 49ers would eventually meet in the playoffs, and sure enough, here we are in the game to get to the Super Bowl. Here are our five matchups to watch, when the Eagles have the ball.

Warner is probably the best off-ball linebacker in the NFL. On the season he had 130 tackles, 10 pass breakups, 2 INTs, and 2 sacks, which are great numbers, but don't tell the whole story. Eagles offensive coordinator Shane Steichen likened Warner's intelligence to former Panthers linebacker Luke Kuechly.

"I can't say enough about Warner, just the way he plays within that scheme," Steichen said. "You can tell he prepares the right way. He understands route combinations. He has incredible instincts to where the ball is. He understands line blocking schemes of when to shoot, go through the gaps."

Warner is also an elite cover linebacker, as you saw in the Niners' matchup with the Cowboys this past weekend, when he ran stride for stride down the seam with All-Pro wide receiver CeeDee Lamb.

Fred Warner as the middle runner in some kind of Tampa-2 zone pressure from the opposite hash, mugged up in the weak A gap. My god man. pic.twitter.com/uV3Wawy1iq

After the Eagles' loss to the 49ers in Week 2 of the 2021 season, Nick Sirianni credited Warner and defensive coordinator DeMeco Ryans for confusing his offense, notably on the "Goal-to-go" stand they made in the first half of that game.

"I think they did a great job, their defensive coordinator just did a really good job," Sirianni said. "So, I give them credit for some of the false things they were showing us. We thought it was a certain coverage; it wasn't. They did a good job of disguising it. 54 [Warner] gets the show running out there and can get everybody lined up the way he needs to, so I give them credit first."

It's not often a head coach will acknowledge that he was out-coached in a game, but that's essentially what Sirianni did that day. The 49ers have a very smart defense, and it all starts with Ryans and Warner. In a season in which Jalen Hurts has made enormous strides on the mental side of the game, this will be his biggest test on that front.

The 2022 Eagles had four players with at least 11 sacks, which makes it difficult for opposing offensive lines to give added help against any one specific player. The Niners have one star player in Bosa, another great player (though unproductive in the sack column in 2022) in Arik Armstead, and then a bunch of role players.

In watching Bosa's sacks this season (you can watch them here), it is very clear that he is an extraordinarily talented pass rusher (duh). He has great speed and burst, and then he'll hit opposing offensive tackles with speed-to-power rushes in which he collapses the pocket and gets home. The Niners love to try to get him free on twists and stunts, where he can use his speed to loop inside unblocked.

But something else stood out as well in watching his sacks. He didn't beat anyone good. Here's who he beat for his sacks in 2022 (in chronological order):

The two veteran starters were Wylie and Leno. PFF dinged Wylie for 9 sacks allowed on the season, and Leno for 8.

Mailata and Johnson will certainly have their hands full, but it's probably more on Nick Sirianni, Shane Steichen, and Jeff Stoutland to make sure that Bosa does not get opportunities to rush the passer unblocked, because he will take advantage.

The Niners' starting outside cornerbacks to begin the season were Charvarius Ward and Emmanuel Moseley. They also have Jason Verrett, who has missed 105 games over his nine-year career. Verrett tore his Achilles this season and never played a game. Moseley tore an ACL Week 5 against the Panthers. Enter second-year corner Deommodore Lenoir, who has started since.

You may remember Lenoir from his interceptions in each of the last two games against the Seahawks and Cowboys. Here's his pick against Geno Smith:

Deommodore Lenoir gets his INT pic.twitter.com/fH7V06gRvL

And against Dak Prescott on an awful route by Michael Gallup:

Those INTs probably felt good, and I imagine Lenoir will head into this matchup with some added confidence. According to pro-football-reference.com, opposing quarterbacks completed 55 of 83 targets against Lenoir for 695 yards (8.4 yards per target), 1 TD, and 1 INT, for a QB rating of 91.2, though it's worth noting that QB rating goes down if you include his playoff INTs.

Lenoir is a perfectly fine CB2, but the Eagles are likely to target him more often than they target Ward on the other side. In their Week 2 loss to the 49ers in 2021, Hurts and Quez Watkins victimized Lenoir for a 91-yard gain.

91 YARDS FOR THE BIRDS. #FlyEaglesFly

The Eagles have a pair of legitimate No. 1 receivers in A.J. Brown and DeVonta Smith, and as always, a CB2 is going to have to cover one of them. This week that's Lenoir.

4) The Eagles' rushing attack vs. the Niners' run defense

The 49ers have an elite run defense.

The other elite run defense the Eagles faced this season was the Tennessee Titans. Unfortunately for the Titans, they didn't have a very good pass defense. In that game, Hurts threw it all over the yard, as the Eagles had 263 passing yards and 37 rushing yards in the first half. The Eagles have a great rushing offense, but they are able to also throw all day against poor pass defenses with Hurts, Brown, Smith, and Dallas Goedert.

The Niners are not the Titans. In addition to their elite run defense, they have the No. 5 ranked pass defense in DVOA. You can't just chuck it all day against them.

The Niners did not face many teams this season with quarterbacks who can make plays with their legs. They faced Justin Fields and the Bears in a monsoon, but I don't think that will serve as any sort of blueprint for the Eagles. The team with a running quarterback that gave them problems was the Falcons, in Week 6, when Marcus Mariota rushed 6 times for 50 yards and a TD, while the Falcons as a team rushed 40 times for 168 yards.

In that game (which you can see more highlight from here), the Niners had some trouble with zone reads and RPOs. The Eagles will no doubt look closely at that game for some clues on how to beat the Niners' run defense.

It's also worth noting, by the way, that the Niners aren't flush with good defensive line depth. The run game can help get players like Bosa and Armstead off the field on occasion.

5) The Eagles' ball security vs. the Niners' ball hawking

The 49ers were second in the NFL in takeaways this season, with 30 of them. They were third in giveaways (as in, not giving it away), with only 17. They led the NFL with a turnover differential of +13, and so far in the playoffs they're +3. This team lives off of turnovers.

Yes, I realize that "Don't turn it over" isn't exactly A+ analysis, and is sort of on par with this:


The Eagles are the more talented team in this matchup, in my opinion, as they have been in every other game they have played this season. But in this game the gap isn't anywhere near as wide as it has been against any other opponent.