Reliving the Eagles' playoff win through the eyes of Cowboys, Giants, and Commanders fans 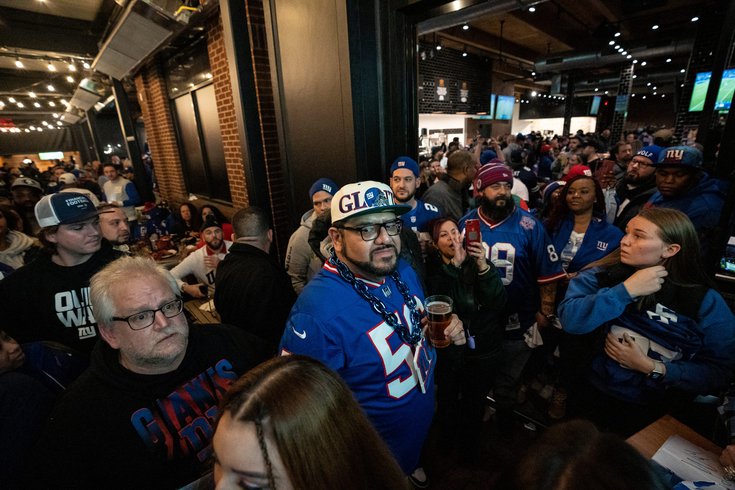 The Cowboys blog BloggingTheBoys.com used to have a weekly feature called "Trolling the Nation," in which they scoured message boards looking for fans of teams around league watching (and commenting on) Cowboys games as they happen. They would then publish those comments on their site.

A good idea is a good idea, and I'm stealing it 🤷‍♂️. For the Eagles' playoff win over the New York Giants, I took a look at the comment sections for the live game threads at the SB Nation sites for the Giants, Cowboys, and Commanders, who were of course unanimously rooting for the Eagles to lose.

To note, I did not correct grammar or spelling, but did star-out the potty language. Here's what I found 😈.

• This is not the same old giants (Giants)

• Cowboys fan here. Would love nothing more then a Giants win. F*** the Eagles. Good luck my division foes (Giants)

• Well lets see who the Cowboys could possibly be playing next week.... (Cowboys)

• Dang it feels so dirty to say go Giants, but I have such a deep seeded hatred for the Eagles and their absolutely awful fanbase (Cowboys)

• Someone said Hurts would be exposed by the Giants defense. Let's see if that happens..... (Commanders)

Eagles drive the field and score on their opening possession

• They need to load up on Lane Johnsons side and send someone. He looks like he is laboring already. (Giants)

• strap in its gonna be a shootout (Giants)

• Right now I'm thinking about how the Vikings had an easy early TD to start last week's game. (Giants)

• lmao so much for punchig them in the mouth. this is gonna be a looooong night fellas (Giants)

• First series was a feel out. Let's see what they come back with. (Giants)

A chain link on the first down marker breaks

• nothing works in Philthadelphia (Giants)

• bad enough we have this pro-Eagles ref now we have to deal with the chain issues too?? (Giants)

• they don't have a spare chain? (Cowboys)

Giants' first drive starts out decent enough, but ends in a turnover on downs after a Haason Reddick sack

• Evan Neal looked absolutely horrific on that play. My god. I'm starting to think his future may be inside. (Giants)

• Neal is such a liability versus Reddick. This is going to be a long night if they don’t give him help! (Giants)

• what was daboll thinking going for it???? (Cowboys)

• Oh God Daboll that was a horrible choice (Cowboys)

• These are the giants we know (Cowboys)

• What’s wrong with this franchise? I realize that could be a very long answer. Did we not even attempt to sign Hassan Reddick last off season? Don’t tell me there was no cap space. It’s pitiful honestly (Commanders)

The Eagles drive the field again and score, going up 14-0

• Smh can't guard them at all (Giants)

• McKinney falls on his face on Goedert TD. Jones trips over his own teammate on huge 3rd and 3. Jones takes sack on 4th down. Embaressing early start. smh (Giants)

• Well, we had as good a year as we could expect. (Giants)

• SMH way too easy for them. Game over. (Giants)

• The Eagles are just better than us in every way (Giants)

• Put our backups in they looked better (Giants)

• Maybe Hurts will re-injure his arm throwing way too many touchdown passes. (Cowboys)

• eagles might put in the 2nd string before halftime (Cowboys)

• Please give me a reason to keep watching. (Cowboys)

• This game is over. Feel sorry for anyone that put money on the Giants (Commanders)

• We aren't playing the Vikings this week. (Giants)

• I wish all the best to Bradberry, but damn it stings. (Giants)

• Look at the bright side: that was about as bad as it could possibly be. Plenty of game left. (Giants)

• I hate the Philthy birds with every fiber of my body and soul. It is only right that the Dallas Cowboys whip them back into the depths of the sewer they crawl out of to play the game. I would cherish a Cowboys win at the Linc far more than a mere Super Bowl victory. (Cowboys)

• Best line of the night "James Bradberry, cut by the Giants, with the interception (Cowboys)

• I wanted the Eagles to get roughed up at least. This is a frickin' pep rally. (Cowboys)

• I hate that we are getting a massive wedgie again on national TV in Philly. (Giants)

• Eagles are putting on a clinic…but it’s not over till the fat lady sings…Look what Tom Brady did to Atlanta in the second half of the SB.. just saying. (Giants)

• Jalen will be able to wear the same jersey next week without washing it. (Cowboys)

• Boy, this is getting embarrassing... Eagles are on a whole other level... (Cowboys)

• Eagles aren't doing anything special,its just the the Giants are complete frauds (Giants)

• This team never had any business in the playoffs. You can only get lucky for so long (Giants)

• Can the Giants do something to show they are alive? Take out knees, grab facemasks, make the Eagles pay for winning. At this rate they will be putting back ups in. (Giants)

• I think the 2011 Giants would struggle against this team... (Giants)

• How can it be that Philly runs a college offense and no NFL defensive coordinator can figure out how to stop it?? (Cowboys)

• Siirianni embodies all that Philly is about - compete douche bag. (Giants)

• Siriani has the most punchable face ever. (Giants)

• After that 2 point clown move by Siriani I’d be putting a bounty on Hurts at halftime. Followed by snow angels. (Giants)

• Ugh they earned it but holy s*** Sirianni has to be the most unlikeable coach ever. (Giants)

• Sirianni does have the most punchable face ever, he acts like a frat boy (Cowboys)

• Sirianni seems like such a tool. Perfect for Philadelphia. (Cowboys)

• Nick Sirianni is one of those mouthy punks that I used to end up punching out in a bar a million years ago when I was a young man. (Cowboys)

• I must punch Sirianni (Cowboys)

• Nick Sirianni needs to be humbled... and i hope its by us in the nfc championship game (Cowboys)

• Jalen Hurts is an easy guy to root for... i hate he is on the eagles and i cant root for him. Philly doesnt deserve him. Nick Sirianni on the other hand entails the eagles fanbase: Toxic, stupid, stubborn, arrogant fool (Cowboys)

• Gotta love Eagles head coach. So much class, what a bozo (Commanders)

The best comments during the relatively uneventful second half

• I think the refs are intimidated by the Philly fans. (Giants)

• Here’s the good news. This illusion that Jones would get $30+ mill a year is over. Dude had 3 good games vs 2 worst D’s in NFL. He’s been overmatched tonight against a good D (Giants)

• AJ Brown is going to unravel by next season. (Giants)

• One year, we will beat the eagles, when the moon is full. . .in another universe (Giants)

• Respect to Eagles, the Beast's best. So, so deep....everywhere. (Commanders)

• If the Giants can just score four unanswered TD's they'll be right back in this. (Cowboys)

• Still have the second half to root for meteor to hit. (Cowboys)

• I hate it when a team I hate sucks so bad they make me feel sorry for them. (Cowboys)