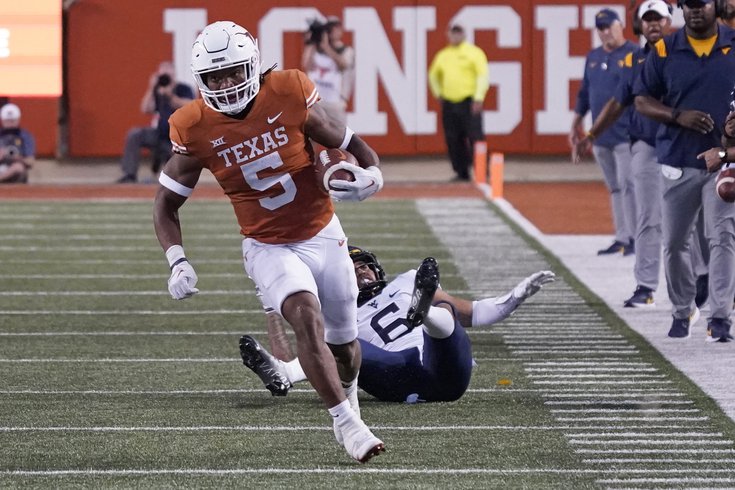 The Philadelphia Eagles are in the NFC Championship Game with a chance to go to the Super Bowl, and we're talking about mock drafts? Sure, why not?

Personally, I'll wait until the season is over and we know where each of the Eagles' two first-round picks are going to land in the draft order before I publish a mock draft of my own (at least with full-on analysis and whatnot), but as long as everyone else is cashing in on those sweet, sweet page views, I'll just go ahead and hop on that content train as well.

Pick No. 31: Jaxon Smith-Njigba, WR, Ohio State: I’d love to see this offense with A.J. Brown and DeVonta Smith on the outside, and Smith-Njigba in the slot. The Buckeye is a natural inside receiver with a similar skill set to Amon-Ra St. Brown.

#JimmySays: I believe that we think of the Eagles' wide receiver position as being fixed, and certainly the duo of A.J. Brown and DeVonta Smith can be a force in Philly for the foreseeable future, but adding a third stud receiver to the slot would make the Eagles' offense all the more unstoppable. I think a slot receiver is sort of an under-the-radar possibility. (I don't think Smith-Njigba will be there.)

Pick No. 10: Myles Murphy, Edge, Clemson Adding another pass rusher to a lineup loaded with sack artists should be part of general manager Howie Roseman’s plan to build strength on strength.

Pick No. 31: Jahmyr Gibbs, RB, Alabama: With Miles Sanders and Boston Scott set to become free agents, the addition of an explosive runner/receiver with big-play ability would undoubtedly enhance an offense that is always in attack mode with Jalen Hurts at the helm.

#JimmySays: Murphy is OK. Great size, inside-outside versatility, a lot to like, but only 18.5 career sacks in 35 career games. He's a first-round talent, but is he top 10? If you mess around with simulated mock drafts, the menu of available players at 10th overall typically isn't very exciting, and you wind up with guys like Murphy. I think the Eagles would like to trade out.

Pick No. 10: Joey Porter, CB, Penn State: With James Bradberry likely to get paid elsewhere this offseason, the Eagles will be looking to address the cornerback position. Joey Porter Jr., the son of a former Pro Bowler, is a long and physical (sometimes, too physical) athlete with the cover skills that might land him in the top 10.

Pick No. 31: Bijan Robinson, RB, Texas: The last time the Eagles drafted a running back in the first round, Ron Jaworski was Philadelphia’s starting quarterback. But Bijan Robinson is one of the best talents in this draft class and would be a bargain with the final pick of Round 1. The Texas running back has no business falling this far. There just aren’t too many clear landing spots within the top 30 picks.

#JimmySays: Someone will ignore need and take Robinson before he gets to 31. He's too good to last that long. If somehow he is still there at 31, the Eagles should absolutely take him, regardless of their history of shunning running backs in the first round.

Pick No. 10: Tyree Wilson, Edge, Texas Tech: No fifth-year senior made as much money as Tyree Wilson did this season. The 6’6″ and 275-pound EDGE showcased his inside/outside versatility while remaining a pass-rush threat and run stuffer. Boasting near-36″ arms definitely helps — for those that need a visual, that’s three two-liter soda bottles!

Pick No. 31: Brian Branch, DB, Alabama: Slot defenders are becoming increasingly valuable in the NFL, and Brian Branch may just be the best among them in 2023. He slides perfectly into Jonathan Gannon’s defense in Philly and makes for a perfect replacement for C.J. Gardner-Johnson if he packs his bags in the offseason.

Pick No. 63: Kendre Miller, RB, TCU: Miles Sanders played out his final year with the Eagles, and they’d be wise to spend their money elsewhere this offseason. Yet, they can’t enter 2023 with only Kenneth Gainwell in the RB room. Kendre Miller is a creative speed back that would pair well with Jalen Hurts in the backfield.

#JimmySays: The visual of three 2-liter soda bottles stacked on top of each other isn't registering for me, lol. I do appreciate that this guy did a three-round mock, and actually wrote something for every player.

Pick No. 10: Christian Gonzalez, CB, Oregon: Gonzalez, a Colorado transfer, is a big-time athlete who is still growing into the position. He has the size, strength and speed to line up against NFL wide receivers; he just needs to improve in run support.

Pick No. 31: Jahmyr Gibbs, RB, Alabama: The Eagles haven't taken a RB in the first round since 1986 (!) but we said the same thing about Andy Reid and RBs right until the moment he selected Clyde Edwards-Helaire a few years ago. And while CEH may not be the best example of why Philly might consider a back here, Gibbs has drawn comparisons to Dalvin Cook and Alvin Kamara as both a runner and a receiver. He essentially be yet another weapon for Jalen Hurts in this offense.

#JimmySays: I'm a big fan of Gonzalez's game, and I think he'll go top half of the first round. I'm guessing that some in our comment section won't like that he's a Pac-12 guy.

And just for fun, submitted without commentary, I did a simulated mock at ProFootballNetwork.