"I was laughing like a madman on my couch as another futile Dallas season came to a close and the Eagles prep for a potential Super Bowl berth." 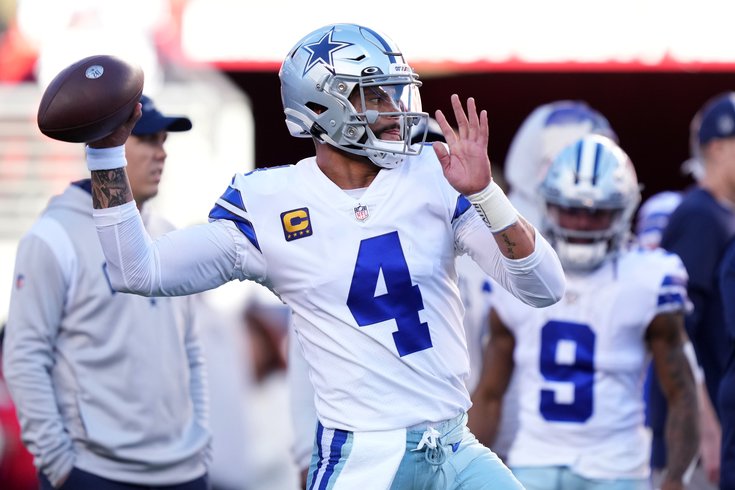 It was as great of a football weekend as any Philadelphian could ask for: the Eagles smoked the Giants in a 38-7 thrashing and then the Cowboys lost in classic Dallas fashion in the playoffs. For the 27th-consecutive season, the Cowboys will not reach the NFC Championship Game. Oof.

Adding to schadenfreude is the Cowboys' hilariously inept final play of the game against the 49ers. The end of their season was as disastrous as Mike McCarthy's career-long clock management.

Trailing 16-9 and facing a third and 10 at their own 24 with just six seconds remaining, Dallas needed a miracle to tie this game and force overtime. They received the complete opposite of that.

The final play that sends the @49ers to the NFC Championship! #NFLPlayoffs pic.twitter.com/Du5KruFQ3q

Can someone dub "Yakety Sax" over that?

Where do I even start?

Let's go with the formation. McCarthy and offensive coordinator Kellen Moore cooked up a doozy here. We have four true offensive linemen on the field, two lined up wide each side, so there's no real o-line configuration here. A lot of good those guys did. They moved maybe two feet the entire play because it was over before even it even started. They were supposed to be on the field for some Stanford band magical lateral play? That makes a lot of sense! Great call, fellas.

Dak Prescott dropped back to pass and fired a ball to second-year wideout KaVotnae Turpin. Even on a team with Ezekiel Elliott and CeeDee Lamb, the ball immediately went to Turpin, who 49ers defensive back Jimmy Ward promptly demolished to end the game. He got blown up on a bang-bang play. They weren't able to attempt a single lateral!

That brinks me to the guy snapping the ball on the play: Zeke.

"Hey, let's make our running back a center and our regular linemen wide receivers" is what went through these coaches' minds. Awesome. Genius move.

Zeke was promptly put on his ass by blitzing 49ers linebacker Azeez Al-Shaair:

“Alright Zeke, so first you’re going to line up at center, then snap it to Dak and then get absolutely leveled.” pic.twitter.com/1cvyXGql5U

In the immediate aftermath of the play, I rewatched this play a good 20-30 times. I was laughing like a madman on my couch as another futile Dallas season came to a close and the Eagles prep for a potential Super Bowl berth.

The damnedest thing is that this isn't even the funniest Cowboys playoff-ender ever. Can I interest you in watching Tony Romo's field goal holding meltdown?

Poor Jerry Jones! It couldn't happen to a nicer guy!

Dak Prescott gave away the ball twice in the narrow loss to the 49ers, in a matchup the Cowboys had a chance to win if they didn’t again generate self-inflicted wounds.#DALvsSF | #DallasCowboys