Eagles-49ers: A look at the odds for the NFC Championship

The NFC's No. 1 and No. 2 seeds will face off for the right to go to the Super Bowl 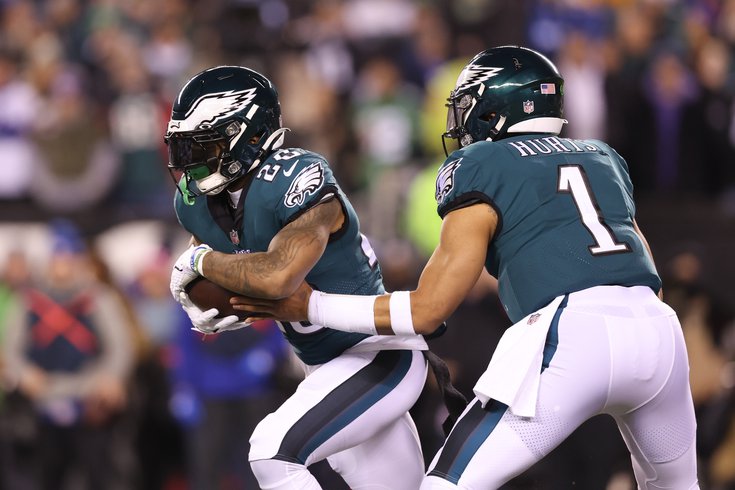 Eagles RB Miles Sanders takes the handoff from QB Jalen Hurts during the first quarter of Saturday night's divisional round playoff game against the Giants at Lincoln Financial Field.

A beatdown of the Giants, another Dallas collapse, and an Eagles team on the doorstep of the Super Bowl?

Yeah, Philly's feeling pretty good after this weekend, but there's work still to do.

On deck now are the San Francisco 49ers, who behind Nick Bosa, George Kittle, and unsung quarterback Brock Purdy, will be looking to push a dominant year of their own to the finish line.

It'll be a battle of the conference's No. 1 and No. 2 seeds in the NFC title game, with both teams stacked in their own right. But going in, the top-seeded Eagles, with an undeniable home-field advantage down at Lincoln Financial Field, are projecting to have the slight edge.

Here's a look at the NFC Championship game odds across several sportsbooks:

The Niners are coming in with the NFL's top-rated defense in total yards and points allowed per game. It's been the identity of their team all season and has carried them through in spite of a run of major injuries, especially at quarterback.

Still, that doesn't mean they're without offensive threats. San Francisco has one of football's best tight ends in George Kittle, a dynamic weapon in Deebo Samuel who can move all over the field, perhaps one of the more underrated receivers in Brandon Aiyuk, and a powerhouse running back in Christian McCaffery who was brought in through trade midseason.

Then, of course, there's Purdy, the third-string quarterback who caught lightning in a bottle after Trey Lance and Jimmy Garoppolo went down. The Niners have rung off eight straight wins since Purdy stepped in under center, including Sunday's defeat of the Cowboys, and although he's looked more suspect of late, no one has figured him out quite yet.

The Eagles will be out to change that this weekend.

With a punishing defensive line led by Haason Reddick, who terrorized Daniel Jones and the Giants last weekend, and a secondary with one of the better cornerback duos in Darius Slay and James Bradberry, the Eagles' defense can be just as fearsome.

And the offense? Arguably the league's best front with Lane Johnson, Jason Kelce, and Jordan Mailata, weapons everywhere – DeVonta Smith and A.J. Brown have become star receivers while Dallas Goedert has been on the cusp of entering that "best tight end" argument – and Jalen Hurts to throw to them, or tuck it and run, in an MVP-caliber year.

Both teams will be showing up with their absolute best in a matchup that, surprisingly, doesn't offer much playoff history, usually catching one or both franchises at a crossroads.

This time, however, it might stand as one of the biggest games in Eagles history.