Eagles vs. 49ers, a history between the NFC's last two teams 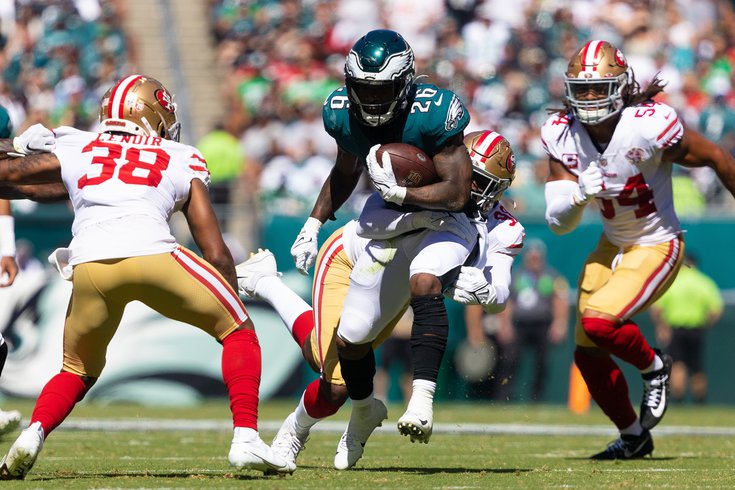 The Eagles and 49ers actually don't have a ton of history.

The Eagles and Niners are two of the more storied, blue-blooded franchises in the NFC and they'll do battle for a trip to the Super Bowl in South Philly next weekend.

No team has made more trips to the conference title game than San Francisco's 18 since 1970, but the Eagles hold their own since 2000, with seven appearances to the 49ers' six. In all, the Niners have won 19 of the 34 all-time head-to-head meetings between the clubs.

The Niners come into the NFC title game boasting a relatively intimidating 12-game winning streak. Their most recent loss was back in Week 7 against the Chiefs, when ironically rookie QB phenom Brock Purdy entered the loss in relief of Jimmy Garoppolo and threw an interception.

The 44-23 loss to the team that beat them back in the Super Bowl in 2020 set a fire under them as they haven't lost since — firing off wins against six teams that stink, and six playoff teams (including the Seahawks and Cowboys during the postseason).

The last time the Eagles played the 49ers...

It was two seasons ago, in Nick Sirianni's second game with the Eagles in 2021. Philly fell behind early, 14-3, and despite out-gaining the Niners and committing no turnovers the offense wasn't quite firing on all cylinders yet.

Jalen Hurts ran for a fourth quarter touchdown and converted the two-pointer to cut it to 17-11, but the comeback effort stopped there. Philly dropped to 1-1 in the home loss, and lost Brandon Graham to a torn Achilles in the setback.

The last time the Eagles beat the 49ers...

That would be one season prior, during Week 5 in 2020. Carson Wentz had not yet melted down and demanded a trade and Doug Pederson was still coaching, fresh off three straight playoff appearances.

After falling behind 14-11 (11 points again what the heck?) Wentz found — who else — Travis Fulgham on a 42-yard fourth quarter touchdown pass. They would later ice the game with a pick six from Alex Singleton, who took the ball from Nick Mullens.

The last memorable game between the Eagles and Niners...

That would probably be in 2002, when Koy Detmer started for an injured Donovan McNabb in a key late season game between two contenders. Here's how the Associated Press lead their game story 12 and a half years ago:

In between those tumbles, Detmer made enough big plays to propel Philadelphia to an impressive win -- and prove that no matter who's healthy enough to play quarterback, the Eagles are good enough to keep winning.

Filling in tremendously for Donovan McNabb, Detmer passed for 227 yards and two touchdowns and rushed for another score before leaving with a dislocated left elbow late in the Eagles' 38-17 win over San Francisco on Monday night. McNabb is expected to miss the rest of the regular season with a broken ankle, but in Detmer's first start since 1999, he was outstanding for nearly three quarters. [Associated Press]

The last time the Eagles played the 49ers in the playoffs...

Believe it or not, the Eagles and 49ers have only played once in the playoffs, and never in the NFC Championship game. In 1996, the 10-6 Eagles faced the 12-4 Niners in the 4-vs-5 Wildcard matchup, the final game played on that Wildcard Sunday.

Steve Young ran for a touchdown and threw one to Jerry Rice in a dominating 14-0 win that saw the Birds picked off three times (Ty Detmer twice, Mark Rypien once) and run for just 71 yards. Rookie wide receiver Terrell Owens had one catch for seven yards in his first playoff game. It's worth noting that Owens' final game as a 49ers came against the Eagles as well, a 31-28 Birds loss in 2003.