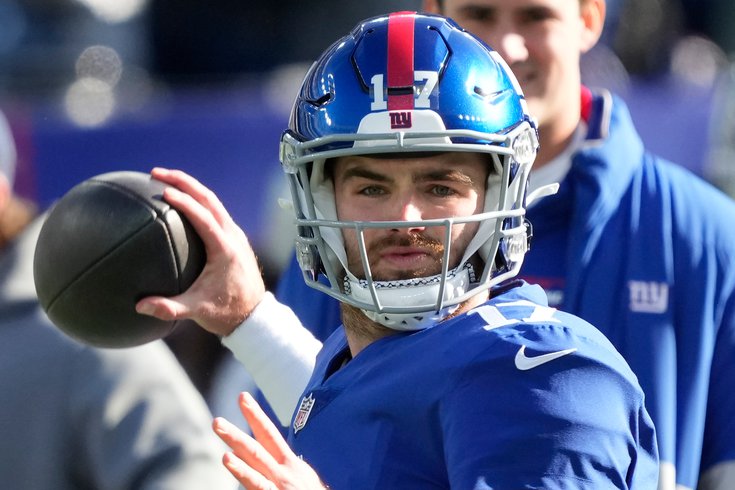 The Eagles' gauntlet of opposing quarterbacks continues with (likely) Jake Fromm starting on Week 16, after they had to face Zach Wilson Week 13 and Garrett Gilbert Week 15.

The Philadelphia Eagles played their worst game of the season a few weeks ago, when they lost to the trash New York Giants, 13-7. On Sunday, they can at least salvage a season split and keep their playoff hopes alive with a win.

In the earlier matchup against the Giants, the Eagles ran the ball successfully, even when the Giants knew it was coming. They ran it 33 times for 208 yards (5.1 YPC) and a TD. However, whenever Nick Sirianni got away from the run, drives stalled and the Eagles either turned it over or punted. They could have run for over 300 yards in that game, and, you know, won.

Let's go ahead and update the Giants' run defense stats.

As you can see, they remain in the bottom half of the league in rushing yards allowed per game and per attempt, and they give up a healthy number of rushing first downs. Interestingly though, they have not allowed many explosive plays in the run game, as their three rushes of 20+ yards allowed is tied for the best in the NFL.

That's sort of similar to the Eagles' rushing offense, by the way. The Eagles are averaging 5.1 yards per carry on the season, and they don't have a single rush of over 40 yards.

Still, the Eagles can run on any team, and they sure as hell can run on this team. Don't overcomplicate it. Just run the damn ball.

2) Dallas Goedert vs. the Giants' and linebackers

In the Eagles' first matchup against the Giants, the Birds failed to get Goedert involved, as he only had 1 catch on 3 targets for 0 yards. In the two subsequent games, Goedert had 13 catches for 240 yards and 2 TDs.

With Blake Martinez out for the season, the Giants' duo of Tae Crowder and Benardrick McKinney is among the worst in the league. Expose them.

3) The Eagles' receivers vs. the Giants' depleted secondary

The Giants will already be without safety Jabrill Peppers and possibly CB Darnay Holmes. They also currently have cornerbacks Adoree Jackson, Aaron Robinson, and Keion Crossen — as well as safety J.R. Reed — on their COVID list.

Depending on who is ready to go for Sunday, the Giants could be pulling guys up from the practice squad just to field a secondary. While the Eagles' focus should be on continuing to do what is working (pounding the run), there should also be opportunities for the Eagles' young receivers to make some plays when their number is called.

The Giants signed Fromm off of the Buffalo Bills' practice squad on December 1. During the Giants' Week 15 loss to the Cowboys, Fromm subbed in for a wholly ineffective Mike Glennon (3 TDs, 7 INTs), who had replaced an injured Daniel Jones in the starting lineup. Fromm was 6-for-12 for 82 yards, 0 TD, 0 INT in that game, and looked like an upgrade from Glennon. Here are those 12 pass attempts:

Every Jake Fromm dropback from the Dallas game. Leads the team down the field and in typical Giants fashion, the offense freezes inside the red zone. pic.twitter.com/Qv9jnCArEX

No decision has been made publicly yet on the Giants' starter this week against the Eagles, but it'll likely be Fromm.

So who is he? Fromm was a fifth-round pick of the Bills in 2020 out of Georgia. His scouting report, via Lance Zierlein of NFL.com:

Heady quarterback who is light on physical traits but sees the game like a pro signal-caller most of the time. Fromm has big-game experience and proved to be a worthy challenger against Alabama as a freshman and sophomore. He's a full-field reader who has shown a consistent ability to change plays and make smart pre- and post-snap decisions. Arm strength is a concern, and that concern may be exacerbated if his ball placement and timing aren't more consistent. He's an intelligent game-manager whose range is good backup to middling starter, but he will be scheme- and skill-position-needy at the next level.

As Zierlein notes, Fromm played in some big games in the SEC. He was a three-year starter at Georgia, and likely won't be awestruck by making his first NFL start. As Zierlein also notes, Fromm is not physically impressive:

He's slow, not very big, and he has Burger King hands.

Swipe at the football, D-line.

If indeed Fromm starts, it will be the second straight week that the Eagles will have faced a guy recently poached from another team's practice squad.

5) Where should the Eagles go feastin'?

In the Eagles' first matchup against the Giants, while the defense as a whole played well enough to win the game, the defensive line only sacked Jones once, and that was on a play in which Jones gave himself up to keep the clock running late in the game.

The Giants' offensive line not only sucks, but once again will be without a few starters on the interior in Nick Gates and Shane Lemieux. The defensive line must generate more pressure than they did Week 12.