Eagles vs. Giants: Predictions, betting odds and more for Week 16

The PhillyVoice staff sees the Eagles getting revenge against the Giants 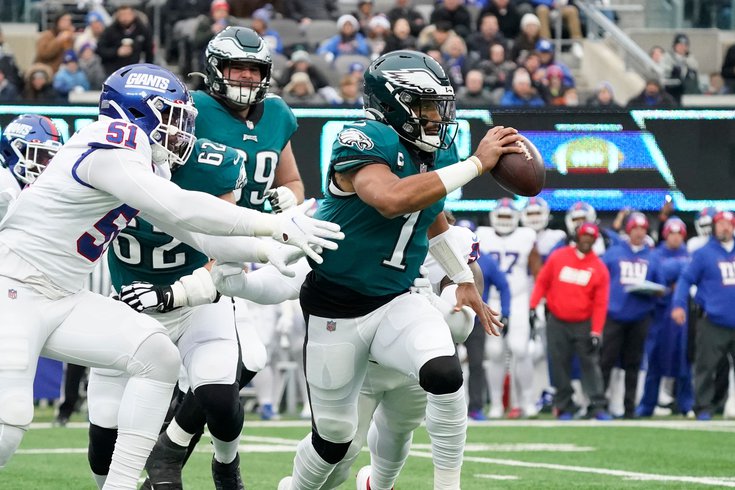 Why does it always seem like there is extra baggage for this Eagles team?

Not only will Philadelphia — who is in a legitimate hunt for a playoff berth — have to unfairly suit up and play on short rest, following a Week 15 Tuesday Night Football win over Washington, they'll also have to do it with their head coach sidelined with COVID. Bleh.

The lucky thing for the Eagles is they have the 4-10 Giants coming to town, a team that probably should be 3-11, but the Eagles handed them a victory in North Jersey a few weeks ago in Jalen Hurts' worst game of his career. He turned it over three times that one and the entire team looked kinda funky.

That's not so anymore. Fresh off an impressive second half-fueled win over Washington after a very weird week, the Eagles have some momentum on both sides of the football and should probably have no problem getting revenge on their I-95 rivals come Sunday afternoon.

It's no surprise that our staff is single-minded in their picks this week. Here's a look at how our writers see this Eagles vs. Giants matchup playing out...

The Giants were already a mess, and say what you will about Daniel Jones, but they've looked even worse without him. Mike Glennon has seen action in four games this season. He is completing just 53.5 percent of his passes, while throwing 3 TDs vs. 7 INTs. The Giants lost all four games in which he has appeared.

It'll either be Glennon or Jake Fromm starting for the Giants in Philly this Sunday. It doesn't matter who gets the call. The Eagles almost beat this trash team with Jalen Hurts playing by far his worst game as a professional quarterback a few weeks ago. With even a slight improvement, the Eagles should be able to handle their business against the Giants this time around.

The Eagles should have no trouble keeping pace in the NFC wild card race with the Giants coming to town boasting another completely unintimidating backup quarterback that the Philly defense should be able to handle with no problems.

The scheduling gods — or perhaps more correctly put, the crappy NFC East — is really giving the Eagles a gift to finish the year, as they'll have Washington waiting in Week 17 a week from now, and then a potential cake walk against Dallas in Week 18, should they clinch their playoff seeding prior. Not a ton of analysis is needed here. The offense will run the ball effectively. Jalen Hurts will manage the game. The defense won't have more than it can handle. Pencil in a win and a cover here.

The Eagles come in to this game against the Giants looking for their first three-game win streak of the season, which might give you a bit of deja vu as that’s the same situation the Birds faced the last time these two teams met up in North Jersey. And even though it’s a short turnaround from Tuesday night’s win over Washington — and in some instances because of that — it almost feels too soon to be writing this prediction, especially since we don’t know what the COVID lists will look like for both teams by Sunday or even whether or not Nick Sirianni will be on the sideline for the Eagles.

All we can do is base our predictions on the current state of these teams, and judging by that metric, the Eagles are clearly the better team, their last loss to the Giants not withstanding. The Eagles have made their living beating up on terrible QBs this season, and while Daniel Jones certainly isn’t great, he’s head and shoulders above either of the two QBs the Giants will be trotting out on Sunday, Mike Glennon or Jake Fromm.

The Birds continue to be the best rushing team in the league, and there’s no reason to think that stops this week just because Sirianni might be quarantined at a hotel instead of calling the plays. And on the other side of the ball, their defense has held four of the Eagles’ last five opponents to 18 points or less. When you’re controlling the ball and keeping the other team out of the end zone, typically good things happen. No reason (at least yet) to think that won’t be the case on Sunday.

Then again, you can’t help but have a sneaking feeling of deja vu. I’m going to chalk that up to a glitch in the Matrix.

Surely the Eagles can't lose to this awful Giants team again, right? I’m going to assume we can just write that loss off as an outlier stinker from Jalen Hurts and predict an Eagles win. Broadly speaking, the Eagles are trending in the right direction, and while I still don't fully trust this group, I'm not going to expect New York lightning to strike twice.

The Giants have no one left to play quarterback. The Eagles are surging right now against inept teams and will finish 10-7, after they beat the Cowboys in a game that won't mean anything to Dallas. This eventually spells a recipe for disaster, if Eagles' management thinks this awful NFL season, filled with horrible teams, is any indication of where the Eagles are. The Eagles will make the playoffs and get smashed. But this year has been a huge step up and Nick Sirianni has actually done a tremendous job in turning this program in a positive direction. But it's far from a Super Bowl contender — and really not that much better than the Giants.

There's just no way the Eagles lose two straight to the Giants. Not these Giants and not after what we saw last week in Philadelphia. Jalen Hurts and the offense can run over anyone, including a Giants defense that's really coming undone.

Dallas Goedert should be able to continue punishing defenses with the Giants being a prime target. Then there's the threat of DeVonta Smith.

The big question is how will the Giants score? Joe Judge was so disgusted with Mike Glennon that he may pivot to Jake Fromm. This one is already over, 38-14, as the Eagles get their revenge.

If you're turning to Google for some holiday gift-giving ideas, expect a heavy dose of air fryers, single-serve coffee makers, and maybe a fitness or wellness tracker or two, along with the usual assortment of electronics. The folks in Simi Valley might want to keep working over the holidays, however, because the algorithm is off.

The greatest holiday gift anyone could ever ask for was delivered early by Kris Kringle in the form of Garrett Gilbert and the COVID-ravaged Washington Football Team. The second part of the shipment was a little late and arrives on Sunday at Lincoln Financial Field in the form of Jake Fromm (or perhaps Mike Glennon) and the New York Giants.

Urban Meyer said every week is Alabama in the NFL and typically the now-deposed and disgraced Jacksonville coach is correct but not for the Eagles over a six-day span this week. It's more like the Crimson Tide's home opener against Mercer back in September. So Happy Holidays and enjoy the right side of .500.