Following their win over Washington, here's a look at where the Birds stack up according to sites like ESPN, NFL.com and others... 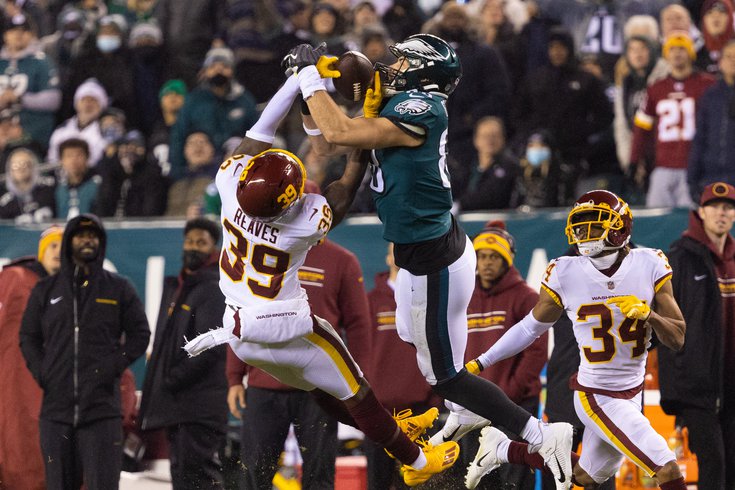 Here's where people around the country have the Eagles ranked heading into Week 16 of the 2021 regular season. Oh, and here's our version of these sellout rankings, too.

There were some shaky moments early in the season, but Sirianni has since found his footing in his first year. He shifted his approach on offense to more of a ground-based attack starting in Week 8. Since then, the Eagles are second in points per game (29.7), first in third-down efficiency (51.2%) and first in rushes of 10 or more yards (40). Philadelphia (6-7) has won four of six games over that span and is now right in the thick of the playoff race. Sirianni has shown growth and a willingness to adapt, and he managed to keep his players on board despite a rocky 2-5 start. He has earned another year at the helm.

#JimmySays: ESPN didn't wait until the Tuesday games were played to post their power rankings, so Washington is still ahead of them here.

Jalen Hurts returned to the lineup and took care of business on Tuesday night, running for two scores and throwing for another in a 27-17 win that keeps the Eagles relevant in the NFC playoff picture. Philadelphia was able to take advantage of a Washington team missing five starters -- including quarterback Taylor Heinicke -- due to COVID-19. Philly’s run game is no joke: The Eagles are the first team with 175-plus yards on the ground in seven straight games since the 1985 Chicago Bears. Philly doesn’t have that legendary team’s defense -- but it plays a style of ball that translates well to December and January. The schedule stays extremely soft this week with a home matchup against the broken Giants.

Tuesday night was a double-digit-point victory that was not as close as the final score indicated. Because they still get Washington and the Giants one more time—and might wrap against a Cowboys team with nothing to play for—this team has the inside track at a playoff spot. That’s a testament to Nick Sirianni and his staff, and especially to Jalen Hurts, the quarterback his own front office never seemed to believe in.

#JimmySays: The likelihood of the Cowboys having nothing to play for Week 18 took a hit when the Buccaneers and Cardinals both lost this weekend.

No analysis given specifically on the Eagles, but they remain in "The Muddled Middle."

Now up to eighth place in NFC, they're making a belated playoff run ... by running. Philadelphia is first team in 36 years to rush for at least 175 yards in seven straight games, and RB Miles Sanders is the first Philly player with back-to-back 100-yard efforts since LeSean McCoy in 2014.

#JimmySays: I hadn't realized this until yesterday — and I probably should have since he is on one of my fantasy football teams — but Sanders doesn't have any of the Eagles' 21 rushing touchdowns this season.

So far this season, there have been exactly zero reasons to compare the 2021 Philadelphia Eagles to the greatest single-season team in NFL history.

But after downing a depleted Washington team in a delayed game Tuesday to get back to .500 and stay in the postseason hunt in the NFC, the Eagles have done something that no team has since the meat-grinder that was the 1985 Bears.

The Eagles gashed Washington for a staggering 238 yards on the ground—the seventh straight game Philly had at least 175 rushing yards.

The Eagles are 5-2 over that span. And at least one of our analysts believe this team has a real shot to make the postseason.

#JimmySays: Man, that 1985 Bears stat is really making the rounds.

Miles Sanders is having one of the weirdest seasons: 155 touches and zero touchdowns. Sanders has been pretty good too, averaging more than 5 yards per carry. It's a real oddity.

#JimmySays: Ugh, I wrote my "Miles Sanders doesn't have any touchdowns" blurb above before I saw that Yahoo had it too. But I'm tired of writing and I'm not re-writing it.

Their running game is going wild right now and it has them back in the playoff race. Jalen Hurts played well against Washington.