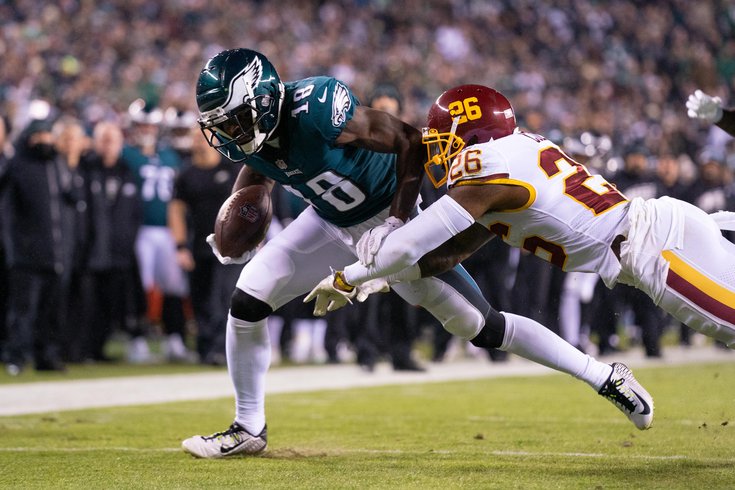 Jalen Reagor did some positive things!

In their Week 15 win over the Washington Football Team, the Philadelphia Eagles played 71 snaps on offense, and 55 on defense. Let's just get right to the snap counts, and some notes.

Analysis: As usual, Hurts wasn't perfect by any stretch, as he either didn't identify or pull the trigger on several open receivers throughout the game. However, there was more good than bad, and his ability as a runner offsets some of his deficiencies as a passer. Even with the quibbling about some missed opportunities, Hurts was still 20 of 26 for 299 yards.

After scoring twice on Tuesday, Hurts is now four TDs shy of the all-time single-season record for  rushing touchdowns by a quarterback:

Analysis: At some point during the fourth quarter, Sanders came out of the game and did not return. Postgame, he said he was fine, and seemed to think that the coaching staff was preserving him for the stretch run after they had taken a 10-point lead.

The combination of Sanders running wide and Howard getting tough yards between the tackles is a formula that is working right now.

Analysis: Slay got an offensive snap! It seemed during the live viewing that he attracted the eyes of some defenders, but it was really only the guy matched up on him man-to-man who paid any attention to him.

Eh, whatever. That was still fun, and I wouldn't mind seeing more Slay on O.

Smith was only targeted 5 times, but he made an incredible catch along the sidelines, which has become commonplace for him during his rookie season.

This catch is unreal by DeVonta Smith 😱

Reagor continues to unmeritoriously get more snaps than Watkins, but at least he had a good game, catching 3 passes on 3 targets for 57 yards.

Analysis: With Brandon Brooks, Isaac Seumalo, Landon Dickerson, and Jack Driscoll all out, the Eagles started a pair of third stringers at guard in Opeta and Herbig, who both held their own against a talented Washington defensive front that includes Jonathan Allen, Daron Payne, and Matt Ioannidis.

The Eagles have impressive depth along their offensive line.

Analysis: Cox had his best game of the season, registering 1.5 sacks in timely spots. He and Javon Hargrave pushed the pocket all night. On the the downside, the edge rushers were unable to capitalize on the push provided by the interior of the defensive line.

Analysis: Edwards forced a fumble that the Eagles couldn't recover, and he had a nice diving pass breakup on a key early third down when the Eagles badly needed a stop.

Analysis: Terry McLaurin got open deep once against Slay, and Slay was lucky the ball was underthrown, otherwise a should-be touchdown was instead "just" a 46 yard gain. Otherwise, McLaurin only had 1 catch for 5 yards the rest of the night.

It's been a fun tracking this journey with you, friends, but we made it to the finish line.