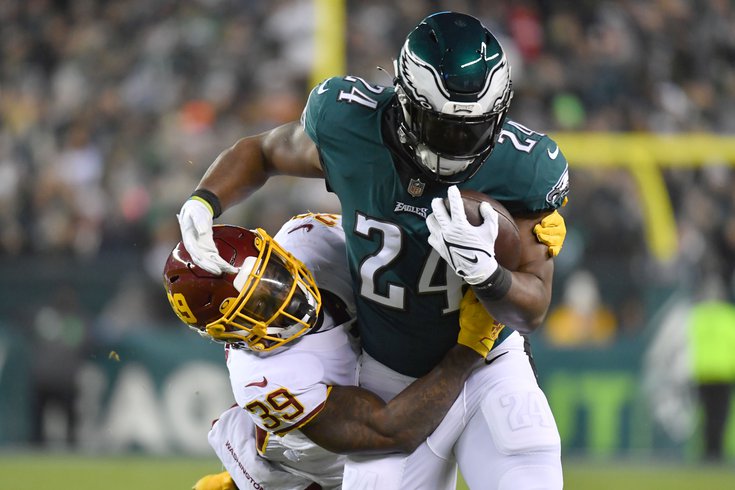 The Eagles rebounded after a tough start and put away a COVID-stricken Washington Football Team, emerging with a 27-17 victory on Tuesday Night Football. To the delight of all watching, they avoided a repeat of the infamous "Joe Webb Game."

• Misdirection was the theme of Tuesday night's win for the Eagles, and it speaks to the identity they have crafted over time under Nick Sirianni. This group is more than capable of winning by playing smash mouth, straight-forward football, but Sirianni has ensured that they don't always have to play that way, enhancing their power by adding a bit of deception to the gameplan.

Pre-snap movement was a staple of Philadelphia's plan against Football Team, with wide receivers, running backs, and even a cornerback using motion to draw the eyes and attention of everyone on Washington's defense. As WFT tried to figure out where the Eagles were trying to go, Philadelphia's intended ballcarrier was already off to the races, whether it was Miles Sanders, Jordan Howard, or even Jalen Hurts, who looked plenty spry in his first game back after a long layoff.

All the misdirection in the world, though, doesn't quite matter if you don't block and execute the play once you have the defense leaning. And if you can't appreciate the work Jason Kelce does in the open field by now, you might have to just turn in your football card, because it is mind-boggling watching him beat guys downfield and block two, three, sometimes four different players en route to a big Eagles gainer.

(Honestly, this is a wasted opportunity for a long touchdown run for Sanders. Kelce clearly has the guy blocked to finish off this play, but Sanders cuts inside instead of trusting his center, and you can see Kelce throw up his arms in confusion once the play wraps up.)

That was the formula for most of the night, and it was especially prevalent on Philadelphia's first drive of the second half, a dominant push on the ground that would eventually end with another Jalen Hurts rushing touchdown up the middle:

.@JalenHurts' 10th rushing TD on the season gives the @Eagles the lead! #FlyEaglesFly

With that run, Hurts just so happened to set the single-season Eagles record for quarterback rushing touchdowns. That's a bigger accomplishment for this franchise than it is for most around the league when you consider the dual-threat guys they've had here over the years, from Randall Cunningham to Donovan McNabb to Michael Vick. We don't need to make any passing comparisons between Hurts and those guys to say it's a nice achievement for him, and certainly a fair reflection of the work he has done with his legs.

Another 200+ yards on the ground for Philadelphia in this one, and they made it look pretty damn easy.

• Even if you are a Jalen Hurts skeptic (and I tend to lean harder in that direction), you have to admire that he is consistently able to shake off bad starts and mistakes to put together at least decent performances, if not outright good ones. He wasn't mistake-free after his first-quarter fumble — missing Kenneth Gainwell in the endzone definitely hurt — but Hurts was a changed man after his second credited turnover, hitting passes all over the field and diversifying Philadelphia's rushing attack.

Aided by the misdirection we mentioned up top, Hurts got a lot more decisive as the game wore on, using subtle pump fakes, shoulder leans, and head nods to open somebody up underneath or create a running lane for himself in the middle of the field. With Hurts lacking the top-end agility he has when he's fully healthy, the second-year quarterback still looked plenty dangerous in the open field without exposing himself to unnecessary risk and hits. And once Washington had to start accounting for his ability to run, it became even easier for their backs to get rolling, with Miles Sanders having the best day out of anybody in the Eagles' backfield.

(I have given Sanders a ton of crap through the years for his indecisiveness, and I do think there was tangible proof in this game of progress in that area. Sure, there were runs that featured some side-to-side bouncing, but when Sanders was patient it was often for the right reasons, with the Penn State product getting downhill quickly the rest of the time. He made 100+ yards look easy, taking advantage of excellent blocking and scheming around him.)

Hurts' turnaround was complete when he linked up with Greg Ward midway through the fourth quarter, throwing one of his best passes of the season on a drive that helped put this game out of reach for good. The placement and timing on the throw were about as good as it gets, and Ward lived up to his end of the bargain on the play, creating the highlight of the night for the offense:

Washington represented lowly competition to be sure, but Hurts took care of business on Tuesday night and did not allow a slow start or any physical limitations he was dealing with to decide his fate.

• This wasn't just the best Fletcher Cox game of the season, this may well have been the best Cox game of the last couple of seasons, though that doesn't say as much as it used to given his drop in form. Even still, Cox was a one-man demolition crew in the trenches, helping to pull the Eagles out of an early funk to win this game in the trenches.

It began with a play very late in the first half, with Washington still within reach of a late field goal to pull into the lead at halftime. But it was Cox who got to Garrett Gilbert and brought the quarterback down for a monster sack, leaving them with no choice but to eat the possession and go into the half tied, all the momentum pointed in Philadelphia's direction.

Cox's hit parade would continue in the second half, and that simplified things for everybody else on defense. There were frequent double teams sent in Cox's direction, freeing up other linemen to go one-on-one to get pressure on Gilbert. Those double teams weren't a catch-all solution, either, with Cox finding a way to get hands on Gilbert and push him around even in those tough circumstances.

• The Eagles' offense looked good enough in the second half to allow Jalen Reagor to have a moment in the spotlight.

• Non-Eagles but sort-of Eagles division — this guy (not Ben, I don't think) has some stones

This guy is insane pic.twitter.com/6p9Q6DEBTJ

• There was still a lot of good work done by Dallas Goedert in this game, including on a deep throw in the first half that Hurts probably deserved to have intercepted. Goedert found a way to prevent the turnover and come up with the ball himself, turning the play into one of the highlights of the day for the offense.

Unfortunately, he also had two really costly drops, both on plays where had had first downs and room to run in front of him. The interception off of his heel was unlucky, but it was also a product of a brutal mistake on his part, so he's the sacrificial lamb in our bad section tonight.

• Mark Sanchez used a whole lot of words to say nothing. Seems like a nice guy, but good lord, let the game breathe every so often. And the worst part is, he hardly even analyzed the game during all his bloviating.

• I would've liked to see the Eagles take the penalty and go for it rather than take the points on Jake Elliott's second-half field goal. I get that you don't want to take points off of the board and blah blah blah, but punish the undermanned team and trust that your run game can pick up the yards and put this game to bed.