The Eagles played pretty bad in the first half but have scraped together a tie after 30 minutes. 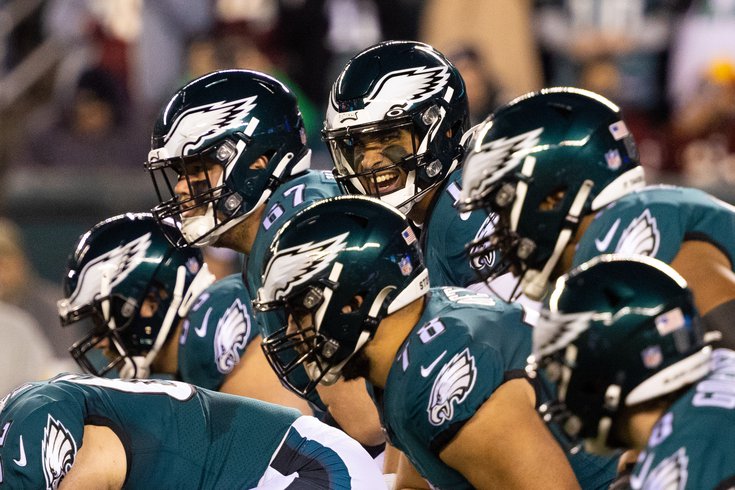 The Eagles sputtered out of the gate against Washington, and they find themselves locked in a 10-10 battle as a result.

• When DeVonta Smith gets the ball, good things happen for the Eagles, even when it's on broken plays where he's making things happen after the pocket breaks down. Smith came up with one of the highlights of the half for the Eagles midway through the first quarter, coming up with a catch along the sideline thanks to some insane footwork:

Even watching that back now, the real-time replay on the broadcast angle makes it look like he never had a chance to get his feet down. It's a play that looks even more impressive on further viewings, and it looked pretty damn good the first time.

More of that in the second half, and perhaps the Eagles will stop vomiting all over themselves against an undermanned opponent.

• Nick Sirianni has some explaining to do for the team's slow start, certainly, but from a play design perspective, it felt like Philadelphia's rookie head coach did a lot right schematically. The Eagles had guys running open on the vast majority of pass plays, using pre-snap motion to misdirect and move Washington around in a way that made life easy for the Eagles.

One big example of Sirianni's creativity in the first half — in a crticial third-down spot late in the half, the Eagles brought on cornerback Darius Slay and lined him up as a slot receiver, only to bring him into the backfield and have him running out of the backfield before the play started. When they finally snapped the ball, Slay turned out to be just a decoy, but Washington was focused on him enough to open up a huge hole for Miles Sanders, who got the first-down yardage while barely breaking a sweat.

As time has worn on this season, Sirianni has crafted a real identity for this group, and he has made enough adjustments and tweaks to play a style that blends tenets of old-school football with modern sensibilities, allowing the Eagles to succeed even when they don't get a whole lot out of the passing game. Whether he's ultimately the leader of a successful team remains to be seen, but I do think he has quieted any concerns about his ability to run an offense.

• Philadelphia's run-first identity was back in full force during the first half, even without Jalen Hurts at his dynamic, scrambling best. As much of a Jordan Howard booster as I have been throughout the season, Miles Sanders was the deserved feature back in the first half, making plays between-the-tackles and bouncing to the outside, nearly every touch turning into something good for the Eagles.

Even with a couple of noteworthy absences on the offensive line, the Eagles had their bookends and their longtime center healthy and ready to go, and that seemed to make all the difference on the ground. The Mailata-Kelce-Johnson trio absolutely mashed in their respective roles, and after a lot of yard-chewing between the 20s, all the Eagles needed was a Hurts sneak to tie it up late in the half:

.@JalenHurts sneaks it in for 6!

We got a tie game. 👀 #FlyEaglesFly

To be fair to Hurts, whose mistakes we'll get to below, he rallied after a tough start to the game, making some excellent touch throws over Washington defenders to string together a few plays and keep the Eagles moving in the right direction. His confidence in his legs also seemed to come with time, with Hurts getting loose after struggling to get out of the pocket on Philadelphia's early possessions in the first quarter. There's plenty of time left for him to leave his imprint on this game, so long as he minimizes the mistakes.

• The Eagles were fortunate the officials initially blew the play dead, or Jalen Hurts' first interception of the game probably would have gone back for a pick-six. Not that it was Hurts' fault in any way, mind you — he hit Dallas Goedert in the hands on a play that should have gone for much more than a first down, and Goedert's drop led to one of the more unlucky bounces you're ever going to see.

Seriously, you could try to replicate this 100 times and maybe pull it off a small handful of times with a lot of practice:

Doubt you've ever seen an interception like this. 😳 @TheHumble_21 | #WashingtonFootball

Goedert has been monstrous for the Eagles when they've featured him in the game plan, but this was a costly mistake that allowed Washington to take control of the game early.

• On Philadelphia's second turnover, there was nobody for Hurts to blame except himself when he put the ball on the turf and allowed WFT to pick up a big fumble recovery on their side of the field. Hurts had plenty of time to get rid of the football, and when he started dancing around in the pocket looking for somewhere to go with the ball, he neglected to protect the football, leaving him susceptible to a strip:

.@_sweat9 with the forced fumble 💥@TheHumble_21 with the scoop 🔥

If Hurts simply wasn't right physically, you could understand him being a little bit off with the ball in his hands given the nature of his previous injury and the long layoff since he last played. But we saw Hurts get loose and look plenty good running as the half wore on, putting those suggestions to bed before the half was even over. And even if he's out there in pain, that just suggests he shouldn't be on the field in the first place, because Gardner Minshew is more than capable of beating this team.

Regardless, you can't make these mistakes, and Hurts took a while to start helping himself as a passer. His personal highlight of the half was a long throw downfield to Goedert, a play where he was bailed out by the tight end on a throw into double coverage that was nearly intercepted. With Kenneth Gainwell open underneath for a touchdown midway through the second quarter, Hurts inexplicably threw to Smith in double coverage instead of taking the easy six.

The rust excuse is not going to hold up in the final 30 minutes, and Hurts has to hope he can bottle the momentum he gained later in the half.

• They didn't have the easiest job possible because of the mistakes made by the offense, Antonio Gibson was basically the only guy they needed to highlight on the scouting report coming into this game, and the Eagles let him get loose early in this game anyway, with Washington using him on the ground and in the pass game to get around the fact that they posed very little danger to the Eagles everywhere else.

You don't win a lot of games where you get outplayed in the trenches, and it's pretty sad that their defensive line with so much invested in it was at best in a stalemate with Washington through the first 30 minutes. The Eagles should be running roughshod on this team and beating them up at the point of attack, and that hasn't happened quite yet.

• Jalen Reagor has to be the worst returner ever billed as a return threat coming out of college. We saw him come up with one big play against the Packers last season, a long touchdown that admittedly got people fired up, and it has been nothing but pain and misery outside of that effort. Every time he went back to get a punt against Washington in the first half, the boo birds came out around Lincoln Financial Field, and he justified that approach by looking slow and indecisive when he had opportunities to actually pick up some yards.

I have never seen a so-called speed guy who doesn't flash the speed and acceleration during a game. Quez Watkins, for example, manages to leverage his burners almost every single game, whether it's because he's beating somebody over the top or hitting the edge on a gadget run play. Reagor had an opportunity to score in the first half and simply could not get there, and it was lined up in a way where a guy with legitimate physical gifts would have found a way to hit pay dirt. Enough of this dude already. Kenneth Gainwell had a better kick return on his first attempt Tuesday than Reagor has probably had all season.

• Shrug it off as the product of one fluke turnover if you like, but there's no excuse for the Eagles struggling this hard against this version of the Washington Football Team coming off of a bye week. They had all the time in the world to get right mentally and physically, and they showed up to this game as if they were going to be gifted a victory for just showing up. The first game out of a bye week should feature some of your best football, with guys finding their legs again to execute new wrinkles in the playbook, and the Eagles looked like a trainwreck out of the chute.

The second-quarter rally was encouraging and there's a lot of football left. But only this team/franchise could make a walkover game feel miserable for at least a full quarter.

• Jordan Mailata taking a holding penalty and wiping out a first down on fourth down was damn ugly, especially when you saw that Jordan Howard was already free to pick up the necessary yardage even without the penalty. But Nick Sirianni's decision to punt on the ensuing fourth-and-four was even worse than that dumb penalty, resulting in just 21 yards gained on the punt that went immediately into the end zone for a touchback. Coward football gets coward results.

• The backward swing pass to Miles Sanders should be thrown out of the playbook before the game is over. Ghastly.