John McMullen: The NFL didn't derail the Eagles' season, it saved it 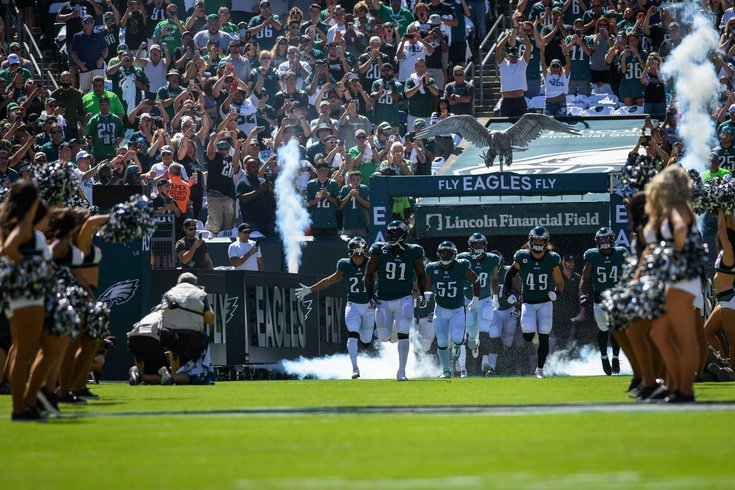 Philadelphia Eagles players take to the field before a game against the San Francisco 49ers. This week, they'll host Washington on Tuesday night after COVID forced the game to be postponed.

The Eagles were understandably upset Friday when the NFL decided to make a U-turn at their expense (and the Raiders’ and Seahawks’) to postpone games for the first, and likely, last time in the 2021 season.

In a vacuum that sentiment is understandable because everything in the NFL is compartmentalized and for one week against one team that will bleed into a second, Nick Sirianni and Co. were certainly inconvenienced.

That said, coaches preach, often ad nauseam, to focus only on the upcoming opponent and to control what you can control.

Obviously, the next name on the schedule still reads Washington Football Team, even by pushing things back 48 hours, and the Eagles certainly can’t control what comes out of 345 Park Avenue.

So, the real story here is human nature.

Urban Meyer’s “Alabama every week” sentiment about the NFL pressed pause with Philadelphia set to host a COVID-19 ravaged WFT that would have had to start either Garrett Gilbert, signed last week off New England's practice squad, or perhaps Kyle Shurmur at quarterback unless legendary St. Louis Battlehawks starter Jordan Ta’amu proved to be Ron Rivera’s favorite.

If you want to throw in the name Shane Falco for fun and point out the attrition on the defensive line in what would have been cleared to play on Sunday, things would have been better set up for Jimmy McGinty and Washington Sentinels

By Tuesday, it’s likely that either WFT starter Tyler Heinicke or backup Kyle Allen — and maybe both — is cleared with the shift in testing protocols. But let’s be honest, that’s not exactly Steve Young backing up Joe Montana either.

That said, no one wants to admit they were warming up to a lay-up so Philadelphia was framing things with the real issue being post-Washington and the short week to get ready for the New York Giants — you know, the same organization that just lost No. 10 on Sunday to Dallas, the fifth consecutive season Big Blue has suffered double-digit setbacks.

And Mike Glennon is quarterbacking the New York Giants these days, at least until he was benched for Jake Fromm against the Cowboys.

Like most of society these days, the Eagles were angry just to be angry about something that has become the norm in the NFL: fluid COVID protocols.

Forget about their A-game, though, if the Eagles bring a B-minus to Lincoln Financial Field over the next week, they will be 8-7 and in position to finish up an unlikely playoff run no matter the perceived hurdles.

Wins or losses miss the point, however.

The NFL pressing pause for two days was not about stopping the spread of the omicron variant or penalizing a team that followed all the protocols. It was about buying time to explain to the NFLPA that every team was about to get hit by a variant seven times as contagious as previous coronavirus strains, but also one much less serious. And yes, Cleveland's J.C. Tretter leveraged his position as NFLPA president to buy some time for the Browns, something that swept up the other teams with 20-plus current cases on the books like the WFT.

Omicron is much closer to the common cold among the young and healthy and if the goal remained testing over common sense moving forward, every team in the league was ultimately going to get whacked just like the WFT, Cleveland, and the LA Rams.

If you doubt the experts just look at what’s happening in the country right now. Or if you’re sports-centric, focus on what went on in the NBA and NHL Sunday.

If the NFL continued to hold the hardline this week and you applauded the low-hanging fruit of an easy win over the WFT, imagine if Week 18 rolled around and the Eagles were in a win-and-in scenario to make the postseason with 20-plus vaccinated, asymptomatic players ruled out.

The hubris of foolishly thinking strict adherence to protocols with more holes in them than the Houston Texans run defense would surely take a back seat to hypocrisy in such circumstances, a hypothetical unneeded because the real end game would have been far darker if "cases" among the vaccinated and asymptomatic remained the measuring stick.

The NFL didn't derail the Eagles' season, they saved it (and every other NFL team's) with a rare proactive step.