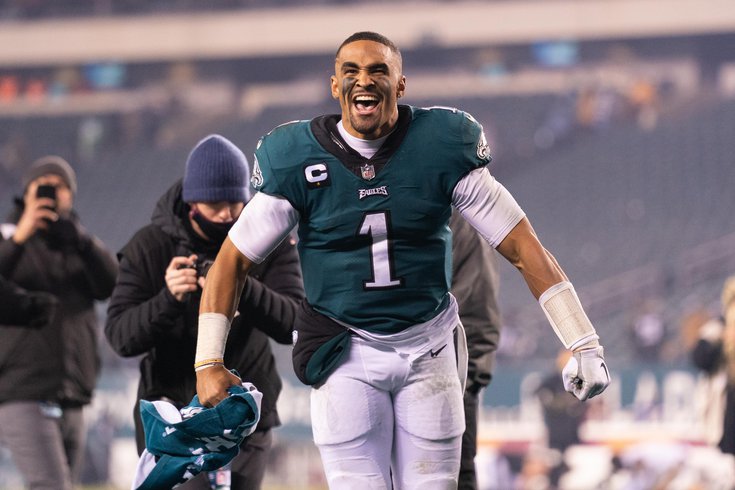 Philadelphia Eagles quarterback Jalen Hurts celebrates as he walks off the field after a victory over the Washington Football Team at Lincoln Financial Field.

The Philadelphia Eagles and their fans had to wait a couple extra days to face the Washington Football Team in Week 15, but that patience paid off, as the Birds (eventually) beat up on Washington, 27-17.

1) The Ground and Pound Award 💪: The Eagles' rushing attack, and their run defense

The Eagles have now rushed for at least 175 yards in seven straight games. They remain the No. 1 rushing offense in the NFL, with an average of 165.6 rushing yards per game.

Here's how their 238 yards against Washington were split:

So that's nothing new. What has flown under the radar is how well the Eagles have also stopped the run of late, on defense. They out-rushed Washington 238-63 Tuesday night. But also, during that aforementioned seven-game span above, the Eagles are out-rushing their opponents 1501-554, which, just... 🤯. They are absolutely owning the trenches in the run game on both sides of the ball.

As we laid out a couple weeks ago when we took a stock up/stock down, game-by-game look at Hurts' season, it's been sort of a roller coaster ride for the second-year quarterback. Week 15 against Washington was a clear "stock up" performance.

On the night, Hurts was 20 of 26 for 296 yards, 1 TD and 1 INT. The INT wasn't his fault, but he was also bailed out on an underthrown ball that probably should have been an INT, but instead Dallas Goedert stole the ball away for a long gain. So those two things probably cancel each other out.

Hurts' highlight of the game was on a back shoulder throw to Greg Ward, on what was one of his best passes of the season:

Just a beautiful throw and catch here by Hurts and Ward for the touchdown #FlyEaglesFly pic.twitter.com/6iOxLh80eu

Hurts also scored two touchdowns, giving him 10 on the season. He's four behind the all-time, single-season quarterback rushing TD record of 14, set by Cam Newton in 2011. He's got an outside shot at that record.

If there were any concerns that Sirianni couldn't be tough with his players, I think he has put those to bed.

Also, to Hurts' credit, he said in his postgame interview that he's a coach's son, meaning that he had to live in the same house as his harshest critic growing up. Sirianni knows that Hurts can take tough coaching, so he dishes it out. Hurts is mentally tough, unlike some past Eagles quarterbacks.

Goedert had two really bad drops Tuesday night, one of which turned into an INT, and really should have been a pick-six.

But there was plenty of good though, too. On the night, Goedert had 7 catches for 135 yards, and as noted above, he saved Hurts on a deep throw, shown here:

Dallas Goedert after a career high 105 yards the last game

He has 98 yards already tonight

Goedert is clearly a very good player, and if he can clean up some of the concentration mistakes, he still hasn't reached his ceiling.

Cox had 1.5 sacks and was disruptive all night on the interior alongside Javon Hargrave. His sack at the end of the first half ensured that Washington did not add any points to the board heading into the locker room.

That play felt a little bit like it allowed the Eagles to keep the momentum they had gained after crawling back from a 0-10 start. Washington was without All-Pro RG Brandon Scherff, which helped, but Cox still had his best game of the season.

MORE: The good, bad and ugly from the first half of Eagles-WFT | A look back at 15 nicknamed Eagles games

Even Reagor got in on the fun Tuesday night, as he had a career high 57 yards on 3 catches. I know, I know, low bar. Baby steps, friends.

7) The 'Middle Finger' Award 🖕: The NFL, to the Eagles and their fans

By postponing this game, all the NFL did was make both the Eagles and Football Team lose more important players to the COVID list before kickoff, and put both teams at a disadvantage for their Week 16 games.

Along the way, they inconvenienced fans who planned their weeks around attending a game on Sunday afternoon, not a Tuesday night. It never made any sense, and in hindsight, the decision to move it looked even worse.

We mentioned above that Scherff was out. He was hardly the only important player Washington was missing. A recap of the noteworthy players who did not play Tuesday night:

I mean, they started Garrett Gilbert, a guy they signed off the Patriots' practice squad four days ago. If the Eagles didn't beat this team, they may as well have just thrown in the towel on the season.

9) The 'Award For Excellence in Craptastic Quarterback Play' 💩: The guys the Eagles have beaten so far this year

Credit the Eagles for getting back to 0.500 with three games to play. The Eagles have a chance to finish the season with a winning record, and maybe even make the playoffs.

But we have to acknowledge the string of bad quarterbacks they've beaten:

In Week 16, barring any surprise developments, the Eagles will face a Giants team that will start either Mike Glennon or Jake Fromm.

10) The 'Come Clean Up Your Mess' Award: Washington

In Week 14, the Dallas Cowboys brought their own benches to FedEx Field because the heated benches on the visiting sidelines reportedly don't work.

In a super lame copycat move, Washington had their own heated benches sent to Lincoln Financial Field.

As of 1:00 a.m., with the Washington Football Team likely already almost home by now, the benches are still here. 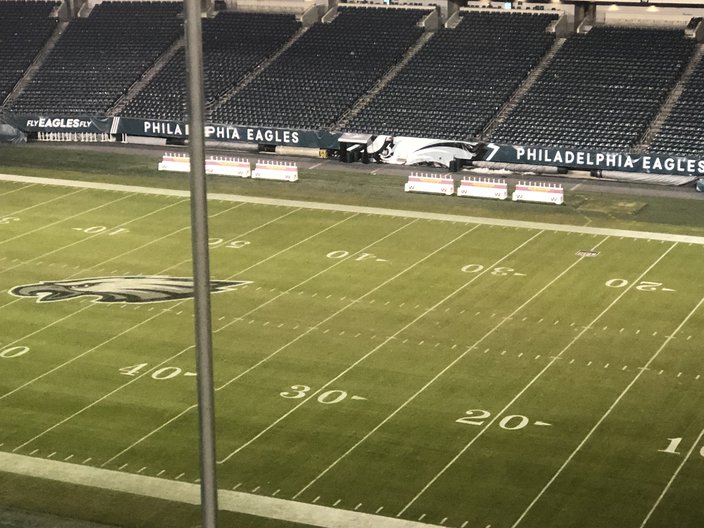