After another loss, it's time to bury the Falcons as the number of teams still standing continues to dwindle 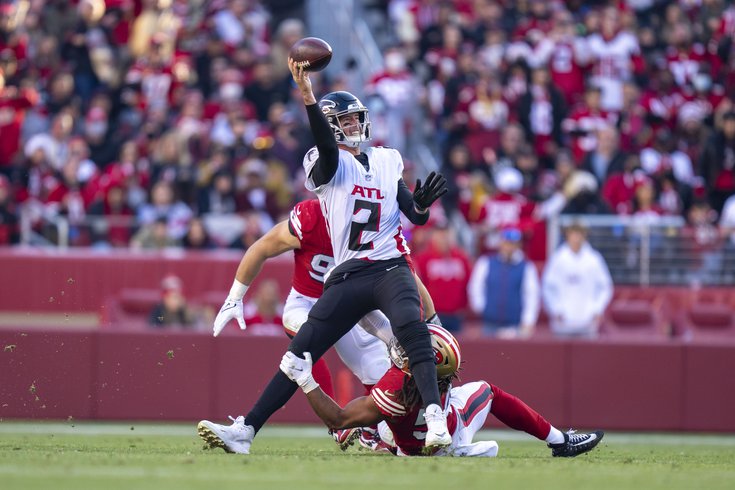 It's a minor miracle that the Falcons even stayed alive this long, but they're now dead.

Week 15 of the NFL season is in the books, and there are three weeks left in the regular season to determine who gets into the tourney. We have one new obituary this week, the Atlanta Falcons.

When the Eagles stomped all over the Falcons way back in Week 1, it felt like Atlanta was one of the worst teams in the NFL. And yet, they managed to stay alive up until Week 15 of the regular season, mainly due to close wins over a lot of bad teams.

But make no mistake, this team was mostly terrible this season. They lost five games by at least three scores, and they currently have the worst point differential in the NFC.

As usual, their defense was atrocious. They ranked 31st in defensive DVOA, and they have given up the second-most points (384) in the NFL, behind only the woeful Jets (428).

Looking ahead, their franchise is in a very undesirable position, in that they have a quarterback in Matt Ryan who is still decent enough, but who is now 36 years old, and would be extremely costly to trade this offseason. There are probably a handful of teams that could win with a guy like Ryan, but the Falcons clearly are no longer one of them, as their roster has holes galore.

Atlanta would probably be best served to "rip off the Band-Aid," so to speak, and trade Ryan this offseason, taking the massive dead money hit that would come with that decision, like the Eagles did this past offseason with Carson Wentz. Not every team would have the stomach for that.

But what seems clear is that the Falcons have a full-on roster rebuild ahead of them. They're going to need a new franchise quarterback and better players on all three levels of their defense, and not a lot of cap space to find outside help. 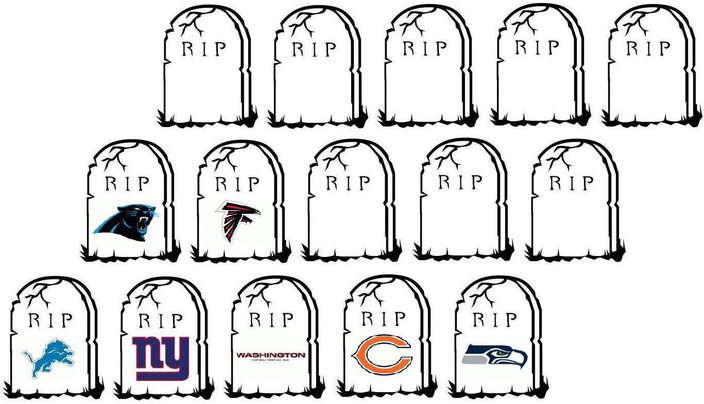 9) Vikings (7-7): There are essentially four teams competing for the 6 and 7 seeds in the NFC. Since I don't have anything to say about the Vikings-Bears game that put me to sleep Monday night, here's where we'll show the remaining schedules for each of those four teams, along with their likelihood of getting in, according to fivethirtyeight.com:

The Eagles need to just worry about getting into the playoffs, before anyone should start worrying about their best possible matchups should they get in. But what the hell. Just for fun, I was curious where each of the top five teams in the NFC rank in terms of rushing defense. Let's just use DVOA:

The Cowboys and Packers are arguably their two most likely opponents, should they get in.

7) Saints (7-7): The Saints completed a sweep of Buccaneers this season after a shutout (!) win over Tom Brady and the gang this weekend. It's not often you win games with 212 total yards and 11 first downs, but the Saints have no other choice than to win ugly with Taysom Hill at quarterback.

From an Eagles' perspective, there's an interesting matchup on the Week 16 slate of games between the Saints and the Dolphins.

If the Saints win, they will end the Dolphins' six-game winning streak, and all but end any hopes Miami might have for the playoffs, which would of course be good for the Eagles' draft positioning. If the Dolphins win, it helps the Eagles chances of getting into the playoffs as a wildcard.

We polled the fan base on their preferences:

If the Saints are able to beat Miami, they'll probably win out against a pair of teams in the Panthers and Falcons who are just looking forward to booking trips to Cabo.

Samuel, George Kittle, and the emerging Brandon Aiyuk are a trio of YAC monsters. Jimmy Garoppolo has a pretty easy job of just completing short passes and letting those guys do their thing after the catch.

5) Rams (10-4): The Cardinals once felt like a lock to win the NFC West, but the Rams have made it interesting, winning three straight, while the Cards have dropped their last two, including a loss to the Rams. They're now tied at 10-4 in the NFC West, with the Cardinals currently holding a divisional record tiebreaker.

The Rams' and Cardinals' remaining schedules:

Neither of those schedules are easy, but the Cardinals' looks particularly difficult with the red-hot Colts, a motivated Cowboys team still in the hunt for a first-round bye, and a prideful Seahawks team that is better than their record would indicate.

Remember when the Cardinals looked like locks to make the playoffs last year, but they lost their final two games and were on the outside looking in?

Well, they're going to make the playoffs this year, but another late-season choke job is underway.

3) Cowboys (10-4): This was a huge week for the Cowboys, who easily took care of business against the Giants, while the Buccaneers and Cardinals both lost. If the season ended today, they'd be the 2 seed.

Still, we'll place the Cowboys in the third spot here behind the Bucs, because the Cowboys haven't advanced past the divisional round of the playoffs in a quarter century, while Tom Brady, you know, has.

2) Buccaneers (10-4): Did Tom Brady shake hands after getting shut out?

It still warms my heart that Brady has been shamed into shaking hands after losses. Merry Christmas, one and all!

1) Packers (11-3): The Packers are in a clear position to land the 1 seed and a first round bye in the NFC, but they're incredibly only 1 point better than the Eagles in point differential, as you can see in the chart at the top of the article. They're only +57. That would be unsettling to me if I were a Packers fan.

Here are the point differentials of the last 15 No. 1 seeds in the NFC:

This 2021 Packers team isn't even in the same ballpark.