Eagles vs. Packers: 5 matchups to watch 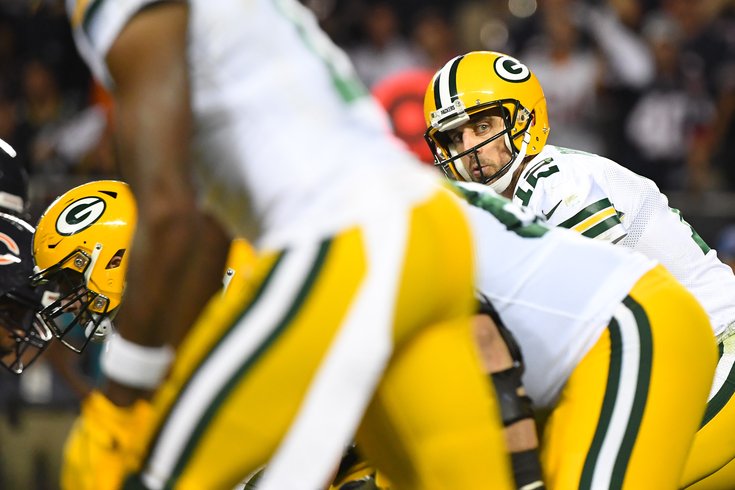 After dropping two winnable games against the Atlanta Falcons and Detroit Lions, the Philadelphia Eagles have the unenviable task of heading to Green Bay to face the 3-0 Packers on a short week with their metaphorical backs against the wall.

The Eagles' defensive line has no doubt heard the (rightful) criticisms of their inability to get to the quarterback so far this season. The Eagles only have two sacks in 2019, one by Andrew Sendejo on a blitz, and one by Timmy Jenigan. That means that every single player on the Eagles' line that will suit up on Thursday night has a goose egg in the sack column.

While they will be eager to put some of those criticisms to bed, they also must make sure that they maintain their discipline, as Aaron Rodgers is perhaps the best ever at getting defensive linemen to jump offsides, and then taking free shots down the field. In fact, he got a struggling Broncos pass rush to jump offsides on the opening drive last Sunday, which led to this:

Here's some more of Rodgers getting free shots:

It's going to be quiet in Green Bay when the Packers have the ball, and Rodgers will be working that hard count. The Eagles' defensive linemen cannot afford to be too overeager to get sacks against this quarterback.

2) The Eagles' corners vs. the Packers' receivers

The Eagles' secondary might actually be better after an obviously not 100 percent Ronald Darby went down last week against the Lions with a hamstring injury. He should be out a few weeks. That means that Sidney Jones and Rasul Douglas will start on the outside against a pair of talented wide receivers in Davante Adamas and Marquez Valdes-Scantling.

Meanwhile, on the other side, Marquez Valdes-Scantling is a 6-foot-4 receiver with 4.37 speed. Jones and Douglas will have their hands full.

3) The Eagles' rushing attack vs. the Packers' run defense

While the Eagles appear likely to have Alshon Jeffery back for this game, they will still be without their deep threat in DeSean Jackson, and could use a boost from the rushing attack. They'll be facing a Green Bay defense that has surrendered 131 rushing yards per game (25th in the NFL) and 4.9 yards per carry (26th), despite having leads in most games.

Obviously, as you all saw last Sunday, Miles Sanders fumbled twice. This is a concern area that originated in college and has carried over into the pros.

"We've tried to correct some things we think from college, so he may not be carrying it quite the same way as he was in college," Mike Groh said on Tuesday. "And again, not the first guy to fumble in the history of the NFL, but obviously we don't want to fumble the ball. We want to take care of the ball. We know that turnovers make it more challenging for us to win, and we've got to eliminate those things. If we can eliminate those things, we're going to be in really good shape."

The Packers have done a good job of getting the ball out. They stripped Noah Fant Week 3:

"You look at this game yesterday against the Broncos, a couple turnovers there, one before half and then in the third quarter that caused or allowed 14 points," Doug Pederson noted on Monday. "You look at Denver and you look at us and you're going, geez, hang on to the football and maybe you got an opportunity there to -- they had a touchdown that was called back because of a penalty and things like that. So this defense is very opportunistic, they can give you a lot of problems on third down. They will play five, six, seven DB's, and [Packers Defensive Coordinator] Coach [Mike] Pettine has a pretty good blitz package. So short week, we have to prepare and get ready to go."

The Packers lead the NFL with a turnover differential of +6. Sanders cannot afford another fumble in this matchup.

4) The Eagles' offensive tackles vs. the Smiths

The Packers identified and attempted to fix a major weakness with they signed a pair of edge rushers this offseason in Za'Darius Smith and Preston Smith.

Those investments have paid off. Through three games, the Smiths have combined for 7.5 sacks.

The Eagles' offensive line issues this season have mainly resided at LG, but the Eagles face a stiff challenge on the outside in this matchup.

5) The Eagles receivers vs. themselves

Asked if there were any teaching points to be made to his butterfinger receivers, who have perhaps cost the team a pair of games because of drops, Pederson responded, "Teaching points? Catch the ball."