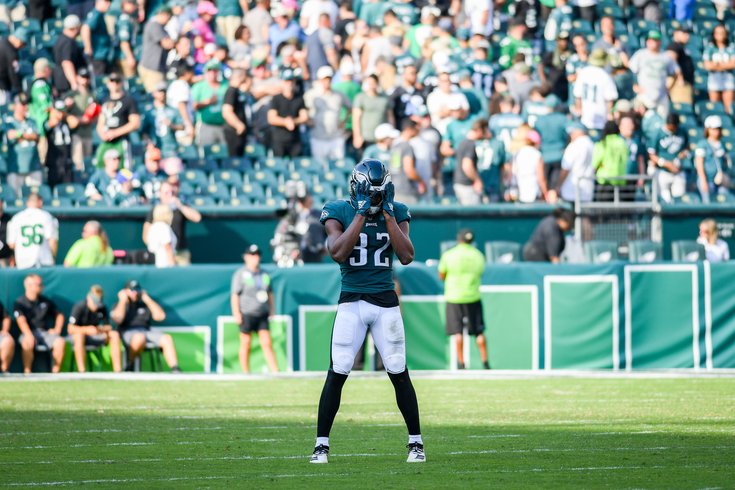 Heading into Week 4, the Eagles took the biggest tumble.

Week 3 of the NFL season is in the books, and the Philadelphia Eagles took the biggest tumble in the hierarchy this week. Let's just get right to it, shall we?

16) Washington (0-3): As an Eagles beat writer covering the team on a short week, I have a lot of work to do in a short amount of time, so we'll hold off burying Washington until next week, when we can give them a proper obituary.

This is the worst team in the NFC though, and in my opinion it's not really close. While I can understand not exposing Dwayne Haskins against a Bears pass rush that was dominating Monday night, it's obviously time to see what he can do, and get him some experience Week 4 against a horrid Giants defense.

15) Cardinals (0-2-1): Through the first three games, Kyler Murray has been sacked 16 times, putting him on pace to hit the turf 85 times this season. Part of that is because he's a rookie quarterback who has running ability, and those guys tend to get sacked quite a bit. Part of it is also because the Cardinals' offensive line stinks.

14) Buccaneers (1-2): In the 2016 NFL Draft, Bucs general manager Jason Licht infamously traded up to the second round for kicker Roberto Aguayo, who is already out of the league and only remained on a 53-man roster for one season.

Did he learn from that disaster? Nope! In the 2019 NFL Draft, he used a fifth-round pick on another kicker, this time Matt Gay, who had a chance to beat the Giants on a 34-yard field goal with four seconds left. Gee, what do you think happened there?

Gay also missed a 42 yarder a week ago, as well as a pair of PATs on Sunday.

13) Giants (1-2): On the downside for the Giants, Saquon Barkley is out for a month. On the bright side, they might have a franchise quarterback:

12) Panthers (1-2): The Panthers picked up a win without Cam Newton on Sunday, but they're not going anywhere without a healthy Newton. It looks like he'll remain out for a while.

“What Cam needs right now is time and rest for his foot. We want him at 100 percent when he’s ready, so there’s no exact timetable for his return,” head coach Ron Rivera said. “At this point, we’re going to go forward with Kyle (Allen) as our starter.”

In my experience, no timetable = Uh oh.

11) Falcons (1-2): Keanu Neal ruptured his Achilles, and threw his helmet knowing his season would be cut short for the second year in a row. The refs found that to be unsportsmanslike of him:

Prayers up for Keanu Neal pic.twitter.com/P17W1Vpg0w

Lol. Like, OK, it's one thing to throw the flag, but once you realize what happened, maybe pick it up? It's not like Frank Reich is going to storm the field and scream at you.

A gif recap of the Eagles' drops on Sunday, in thread form...

8) Bears (2-1): Mitchell Trubisky started off this season flat, if we're being kind, and he remains a major concern even after a much better showing in Washington.

However, while the Bears' pass rush doesn't have gaudy stats, you saw on Monday night that it is legitimately awesome.

7) Vikings (2-1): Kirk Cousins has attempted 31 total passes in the Vikings' two wins. They are an elite team when they jump out to quick 21-0 leads and don't need their QB to step up under adversity.

Anecdotally, it feels like every year there's a team that starts out with something like a 6-2 record, and then they fail to make the playoffs. Last year it was the Panthers. The Eagles were that team in 2014.

The Niners are my pick to be that team this year.

5) Seahawks (2-1): Are we sure the Seahawks are still good? This is a question I've struggled with for like 2.5 years now. In their first three games, they narrowly handled their business against a couple of winless teams in the Steelers and Bengals, and in Week 3, while they gained a ton of yards, self-inflicted wounds put them in a position in which they were never in the game in the second half.

4) Saints (2-1): The Saints got outgained 515-265 in Seattle, but a punt return TD and a fumble return TD put them ahead early. They'll struggle while Drew Brees is out, but this was a huge win that they can put in the bank as Brees recovers.

The Saints are going to win the NFC South, because the Panthers and Bucs are both trash, and the Falcons aren't very good either. In terms of playoff seeding, it's just a matter of how many games they can put in the win column as they tread water with Teddy Bridgewater. See what I did there? Boom.

3) Packers (3-0): The Packers lead the NFL with a turnover differential of +6, thus explaining their 3-0 start despite Aaron Rodgers not looking elite just yet.

2) Cowboys (3-0): The schedule really couldn't have lined up any more perfectly for the Cowboys to start the season:

They have a legitimate chance of starting 8-0. At a minimum, they should be favored in all 8 of those games.

Gurley's rushing numbers are actually a little better so far this year than they were a year ago at this point, at least in terms of yards per carry, but the Rams are not running their offense through him the same way, and they aren't as explosive. On the good ol' eye test, Gurley just doesn't look like the same guy that he once was.

I strongly considered putting the Cowboys in the top spot, but let's see them beat someone decent first.