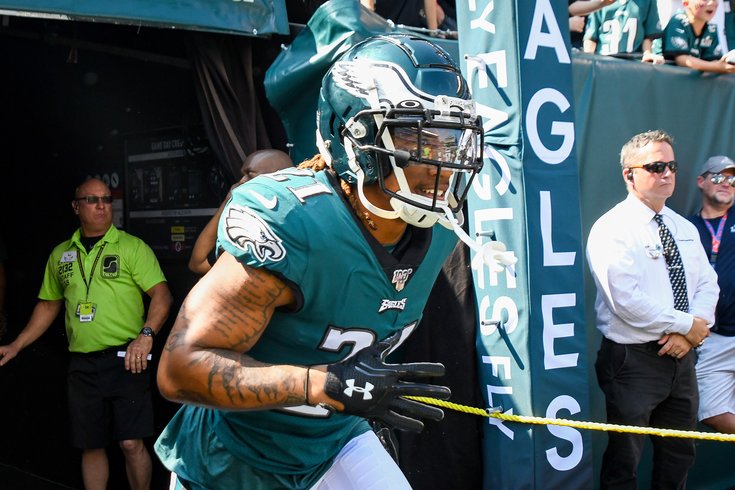 Ronald Darby runs out onto the field during the Philadelphia Eagles game against the Detroit Lions at Lincoln Financial Field, Philadelphia, on September 22, 2019. (Kate Frese/Philly Voice)

After Week 1, it was determined that the Philadelphia Eagles would be without Malik Jackson for likely the rest of the season. After Week 2, we learned that Timmy Jernigan would be out for a while, and that DeSean Jackson and Alshon Jeffery might not be ready to play the following week.

• CB Ronald Darby: "I am getting more information on Darby, so I will have something for you either later today or tomorrow when the coordinators speak," Pederson said.

In day-after-game Pederson parlance, that's usually bad news for the player in question. Darby left the game on Sunday with a hamstring injury and did not return. If there's an injury that's maybe not so bad, it's this, as Rasul Douglas and Sidney Jones have both outplayed Darby, and Jim Schwartz has continued to perhaps wrongly play Darby over them.

#Eagles CB Ronald Darby, who injured his hamstring on Sunday, is expected to miss some time following his MRI, source said. Likely a few games. So Philly will be short-handed in the secondary.

• OT Andre Dillard: "Dillard is okay," Pederson said. He left on Sunday with a knee injury.

• OT Jason Peters: "Just a little nausea," Pederson responded after Peters missed the solid chunk of the first half on Sunday. "I don’t know if it was from the heat or what, but just some nausea there, but he was fine after that."

Jeffery was listed as questionable heading into the Lions game, but couldn't go. We'll also note here that's it's unlikely that DeSean Jackson will play on Thursday.