Philadelphia will always have a love/hate relationship with Nelson Agholor 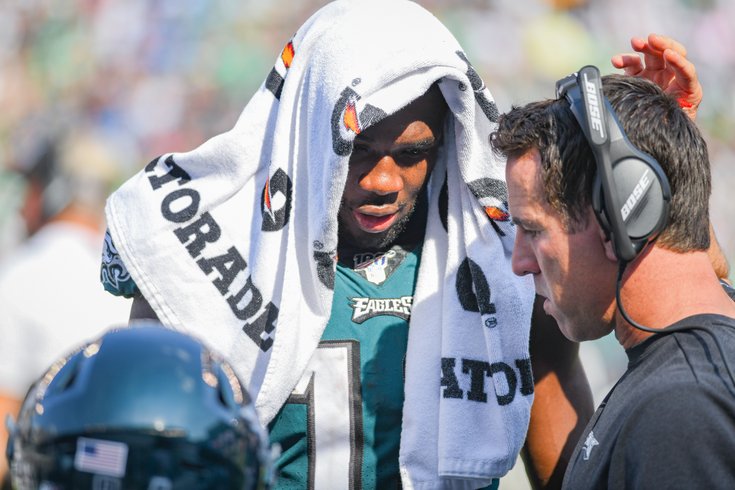 Last week in Atlanta, Nelson Agholor had a game-winning touchdown in his grasp — and he dropped it.

In the first half Sunday against the Lions, Agholor had a costly fumble (and another unfortunate drop on a key third down) that helped contribute to yet another Philadelphia defeat in a game they were expected to win handily.

However, he scored touchdowns on a pair of short passes, each of which put the Eagles back within three points in the Eagles ridiculous 27-24 loss to the Lions Sunday (though drops by Zach Ertz, JJ Arcegia-Whiteside and others wound up costing the team a comeback victory).

Such is the stuff of Nelson Agholor, a talented player who always seems to find himself the subject of criticism in a city that loves to criticize.

"Honestly, I focus little on the good sometimes, that's the reality of it," Agholor said after the game. "We didn't win. The plays you mess up on may have been the ones that determined your opportunity to win."

In a game that saw Eagles' pass-catchers drop seven passes, commit three offensive pass interference penalties, fumble two more times and allow a kickoff return touchdown, Agholor is hardly the only goat. It was a team loss due to a lot of individual miscues.

The veteran wound up leading all pass-catchers (on the depleted offense) with eight catches on 12 targets, though he left a lot of meat on the bone collecting just 50 yards.

Agholor is the very definition of the "no no no, yes yes yes," player. He's easy to hate on the field sometimes, but extremely hard to hate in reality. He's an articulate, thoughtful athlete who takes responsibility for his actions and always has time for fans and for media members.

The former first round pick has fought off demons throughout his time in the NFL, famously admitting the pressure was getting to him after he was tortured by drops early in his career.

“I’m pressing so much,” Agholor said back in November of 2016. “I’m worried about so many things. ... It’s such a selfish thing that I need to stop. I need to give my energy to my teammates and this organization and not myself because I’m feeling so pressured to make every single thing.”

“I did it to myself. I started getting into my own head and trying so hard and thinking about being perfect. And when miscues were there, and when they were exposed, I let it just eat at me.”

He bounced back after facing the dreaded "bust" label, catching 116 passes for a combined 1,504 yards in 2017 (instrumental in their Super Bowl run) and 2018. After making a few costly errors already this season, Agholor will need to find yet another bounce back.

"We're talking, what, two fumbles or at least a ball on the ground in one game," Eagles head coach Doug Pederson said Monday, "I mean Nelson Agholor, that one year, it sort of kind of was one or two here and then it just sort of kind of continued. We're drawing off one game and so it's hard to say at this point."

"I shouldn't make that mistake (the fumble), it's as simple as that," Agholor said. "I 100% have to be better. We have to evaluate ourselves, it's a quick turnaround and we have to try and not repeat the mistakes we made tonight.

"I'm in my fifth year and every opportunity I get I have to take advantage of. Ain't no receiver has ever played a perfect game."

Agholor was pressed into duty this season in a way he didn't expect as he became the No. 1 receiver early last week in Atlanta, when Alshon Jeffery and DeSean Jackson each were sidelined with injuries that also kept them out in Week 3. There's a good chance each could miss some more time.

"The self-inflicting wounds, the turnovers the penalties, these first two games if we can just eliminate that, take the injuries aside, we have a chance to win both football games," Pederson said, blaming miscues – not injuries – for the Eagles back-to-back losses.

Agholor needs to be ready and needs to have a short memory.

"I think I am gifted and coached well, but in terms of making mistakes, that can't happen, especially me being the veteran of the group," Agholor said.

Reports have suggested that perhaps Jeffery will be able to suit up in Green Bay, with Jackson's return not expected until Week 5 or so. To Agholor, that fact is irrelevant. He is hard on himself because he expects himself to play at a high level week in and week out.

Agholor now just needs to prove it when his team needs him the most.