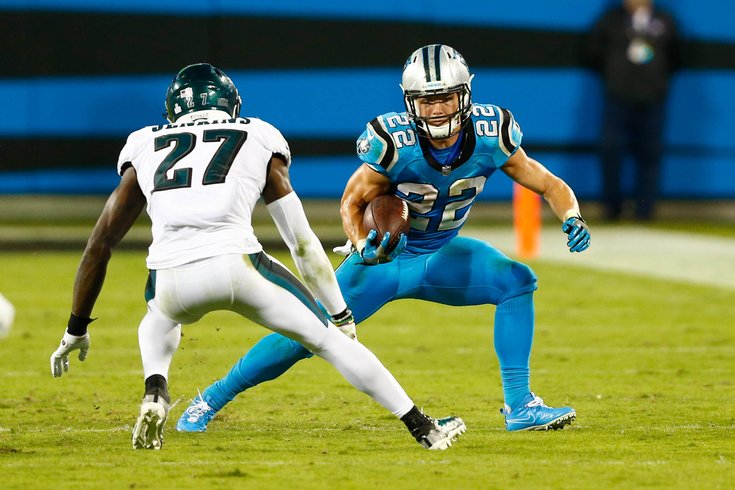 Will the Eagles get back above .500 with a Week 7 win over the Panthers on Sunday? Will Carson Wentz continue to look like the MVP candidate we saw a year ago? And can the defense keep Cam Newton and Carolina's potent rushing attack in check?

Here's how we see this week's Eagles-Panthers game playing out.

The Eagles' biggest weakness (giving up the deep ball) mirrors the Panthers' biggest deficiency, as they have just one pass play of 40-plus yards on the season. Additionally, while they've gotten better play than expected from their reserves, the Panthers are still missing both of their starting offensive tackles. That should be a decided advantage for the Eagles' pass rush.

Meanwhile, in the secondary, the Panthers are starting a pair of young corners (James Bradberry and Donte Jackson), a 37-year-old safety (Mike Adams), and a linebacker playing safety (Eric Reid). The Eagles should be able to get their passing attack going against a middle-of-the-road defense that tends to get overrated because they've been good over the last half-decade.

I get the feeling that the Eagles have righted the ship. They looked like themselves last week in New York and had a few extra days to rest and get focused leading up to Week 7 — a game they are favored to win against a Panthers team that has shown weakness in two road setbacks. I think a bend-but-don't-break defensive performance (from the beat up D missing several key players) will be enough with Carson Wentz healthy and under center. Give me the Eagles 31-20 in this one.

I'm currently in the basement with a 2-4 record on the season after incorrectly picking the Giants last week. Don't worry, I'm not going to make excuses and say that I only picked against the Eagles because I felt like one of us needed to do that. That's definitely not what happened.

Let's just say I learned my lesson and won't be hedging just for the sake of hedging this time around. I think the Eagles match up well against the Panthers, and I don't think the Birds lose two home games in a row. With Lane Johnson and Jason Peters both expected to play in this one, hopefully Carson Wentz won't spend so much time picking himself up off the turf as he has in his other starts this season. And if that's the case, I see another big day in store for the Eagles offense.

The Panthers have not been a good road team this season. All three of their wins came in the comfort of their own stadium, and their losses (at Atlanta in Week 2, at Washington last week) did not exactly come against a pair of juggernauts. So the Eagles don’t exactly have anything to fear with Carolina coming to town.

The Panthers did get a boost with the return of Greg Olson last week, but the Eagles have been particularly strong covering tight ends early this season. They’ve allowed the least receptions to the position (19) of any team in the league, and though that may be a product of teams picking on their shaky outside coverage, Carolina doesn’t have many weapons to punish them there. One matchup to watch — how they deal with Christian McCaffery catching passes out of the backfield.

Health is the major concern for the Birds going into Sunday. Maligned though he may be, it would be tough to lose Jalen Mills altogether, and both he and Lane Johnson were limited participants in practice Thursday. The availability sheet will loom large this week.

With the home crowd behind them, I think the Eagles ultimately get this done.

Yep, another week of sipping out of the midnight green Kool-Aid cup. Carolina feeds right into the teeth of the Eagles' defense, relying heavy on the run, with an anemic passing game that is 28th overall in the NFL.

I like the Eagles' defense at home and putting the clamps on Cam Newton.

MORE: Safety Blitz with Malcolm Jenkins: How the leader of the Eagles defense wound up in the fashion industry