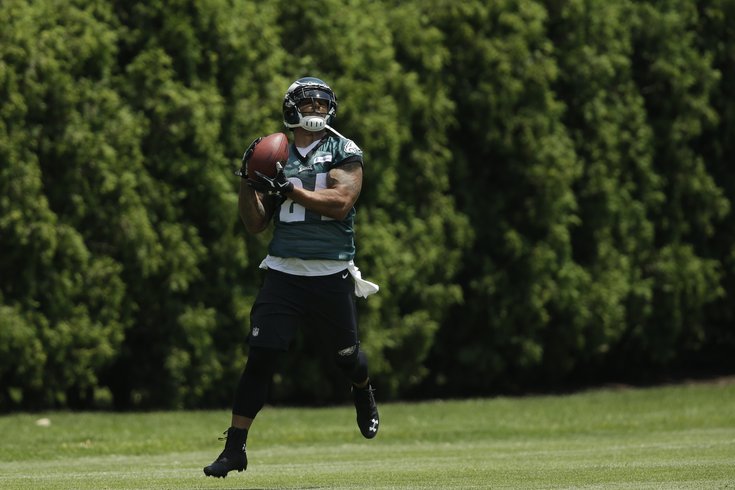 If DeMarco Murray went down, the Eagles wouldn't have to shift what they do offensively to cater to Ryan Mathews' skill set.

Way back in April, prior to the 2015 NFL Draft, Eagles quasi-GM Ed Marynowitz laid out the Eagles three-pronged approach to player selection in building their roster.

"Number one, it's the height-weight-speed, according to the position" said Marynowitz. "That's the one factor of it. They either have that or they don't. It doesn't necessarily eliminate them per se, but that's one element of it. So you'll grade that individually.

"The second part is the position specifics, or the critical factors for that position, which is basically the guy's athletic ability to play that specific spot, which is also relative to your system and scheme. Every team is different, so we have certain prototypes for that. The third part is the character, attitude, and intelligence piece, in terms of the right football makeup, and how we want to build the team."

The #culture aspect is pretty straightforward. Since Chip Kelly has arrived in Philadelphia, the Eagles have loaded up on boy scouts. The position specifics are a little more nuanced, although you can certainly see some trends there. For example, a critical skill set for an Eagles safety these days is that they have the ability to drop down into the slot and cover receivers man-to-man. Another example of position specifics could be that the Eagles clearly seem to put added emphasis on defensive backs who break up a lot of passes.

And then obviously, you have the size-speed prototypes at individual positions. A clear example of what the Eagles value in their defensive linemen is that they're long and lean.

"A two-gap defensive lineman looks different than a one-gap defensive lineman," said Chip Kelly, speaking at a media roundtable session. "That’s just kind of how it is. We want taller, longer guys with longer levers that can two-gap. And if you look at our D-Line, they’re taller and longer than when we first got here. That’s because we went from a 4-3 Wide-9 to a 3-4. You had to make that adjustment along the way. You couldn’t do it in one fell swoop.

"I think you’re trying to get people that fit into your system, and that’s why you have height and weight and speed parameters that fit your system."

"We did the same thing when I was at Oregon. The kid who got picked in the first round this year, Arik Armstead, most people were recruiting him as an offensive tackle coming out of high school. We recruited him as a defensive lineman. He got picked in the first round. Probably a first-round pick next year will be DeForest Buckner, who was kind of a carbon copy of what Arik is. But that’s what we’re looking for. When you kind of have those height/weight/speed parameters by position, it narrows it down, narrows the pool down in terms of what you’re looking for. But that’s what you play with. It’s tough to play with a 6-foot, 290-pound guy who’s not gonna be a good two-gapper. It doesn’t mean he’s not gonna be a good football player. It just means he doesn’t fit in terms of what we’re trying to get accomplished.”

Kelly had similar comments about the running back position. “If you have multiple backs you don’t lose anything when you take one out, and I think we probably relied on one too much in the last couple of years. But I have great confidence in those other guys that when they go into the game you don’t have to change what you’re doing. Ryan (Mathews) and DeMarco (Murray) are very similar in terms of how they run and what they’re doing so it’s almost like you think you catch your breath when you take DeMarco out of the game but then here comes Ryan, that’s gonna be a real difficult task for people, I think.”

The downside of limiting yourself to certain parameters in terms of height-weight requirements is that you could be passing on talented players in favor of guys who fit your scheme. For example, the Rams' Aaron Donald (6'1, 285) was the NFL Defensive Rookie of the Year in 2014 after registering nine sacks from interior DL spot (not that the Eagles passed on him or something). Still, there's no way he'd fit what the Eagles look for in a 3-4 DE. However, the desirable side effect of staying within those parameters is that you don't have to change what you do from a scheme perspective if you lose a starter.

"I think some people just grasp at straws when all of a sudden you have a 6-6, 250-pound quarterback backed up by a 5-10, 175-pound kid that’s a run-around guy," said Kelly. "I think you’re trying to get people that fit into your system, and that’s why you have height and weight and speed parameters that fit your system."

That echoed what Marynowitz said back in April. "There's enough statistical data to support that in terms of players that are playing at a high level, that there's a certain prototype. So our goal there was that although there may be varying degrees of players in terms of an ability standpoint, when the starters come off the field and the backups come in, they all relatively look the same. So there’s a certain prototype at each position. We try to build the same thing here, whether it’s at inside linebacker, outside linebacker, corner, safety. There’s a prototype, and there’s a model that fits what we do."