The tremors originated near Mifflintown, Juniata County, and could be felt in parts of Chester County. 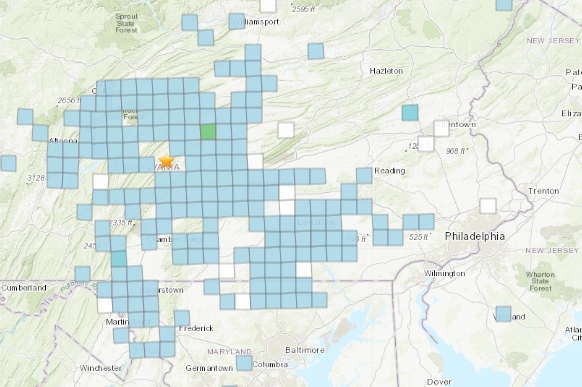 The U.S. Geological Survey reported a 3.4 magnitude earthquake had occured near Mifflintown, Pa. on Wednesday night.

An earthquake struck Central Pennsylvania on Wednesday night that was felt in the Philadelphia region in Chester and Berks counties, the U.S. Geological Survey reported.

Around 8:30 p.m. a 3.4 magnitude earthquake shook Juniata County, located about 130 miles northwest of Philadelphia. The quake occurred about 11 miles southwest of Mifflintown at a depth of more than 16 1/2 miles below the surface..

The agency received more than 1,300 reports from residents who felt the tremor. It was felt as far away as 50 miles north in Williamsport and about 100 miles south in Columbia, Maryland. The earthquake also was detectable in Southeastern Pennsylvania near Reading, Berks County and Exton, Chester County, according U.S. Geological Survey data.

No damages or injuries were reported from the earthquake, and people who felt the it described the intensity as weak to light.

Earlier this week, a 4.0-magnitude earthquake occurred just north of Cleveland, Ohio, under Lake Erie. The center of those tremors is about 225 miles northwest of the origin of Wednesday's earthquake in Pennsylvania.