Alvarez: After I beat McGregor, we’ll force UFC to come back to Philly 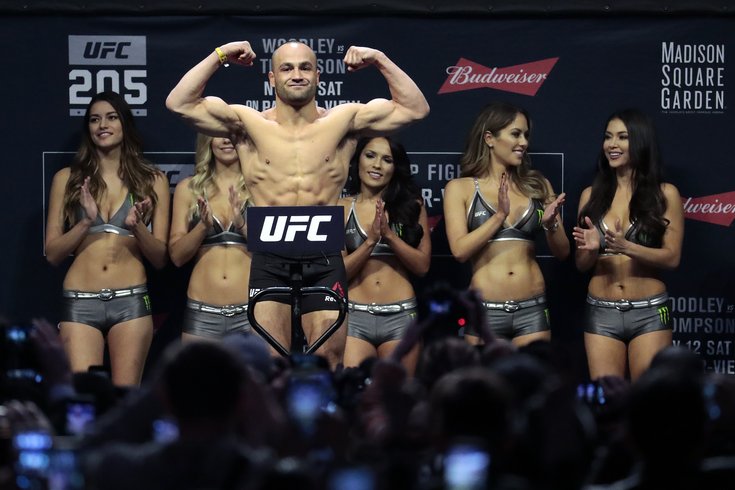 Eddie Alvarez stands on a scale during the weigh-in for his UFC 205 bout against Conor McGregor at Madison Square Garden in New York.

NEW YORK -- I've written quite a bit about UFC lightweight champ Eddie Alvarez ever since he moved over from Bellator back in 2014. And one thing that's become abundantly clear is how much he cares about Philadelphia -- and how badly he wants to bring the sport back to the city that raised him., as well as the fans that have been so supportive of the 32-year-old Kensington native.

"Everything that has come after that is just a byproduct of me doing something I love. The fans from Philly have allowed me to do that. And because they’ve followed me, promotions have seen it fit to pay me enough to fight for a living. I’m indebted to them forever.”

After he and fellow Philly lightweight Paul Felder both secured victories at UFC Fight Night 81 back in January, the two talked about what it would mean to host a major UFC event in the city -- the last was back in 2011. Then, after a stunning first-round knockout of Rafael dos Anjos to claim the title back in June, Alvarez said that he wanted to defend his title in Philly.

That plan got derailed, but it wasn't necessarily a bad thing. Instead of fighting in his hometown, Alvarez had to make the trip up the Jersey Turnpike to New York City, where he is headlining the biggest card in UFC history against the sport's biggest name, featherweight champ Conor McGregor. And as for a possible Philly card, I've been told that it's something they're working on and are certainly interested in, but the main reason it didn't happen in time for this fight was because of scheduling conflicts with the Wells Fargo Center. Essentially, they couldn't find a date that worked for both sides.

Compared to Dublin, where McGregor is from, Alvarez is fighting in his own backyard. But if the crowd inside the packed weigh-in on Friday and the people swarming outside the Garden in midtown Manhattan are any indication, it's the Irishman who will have the home-crowd advantage on Saturday night.

There will be plenty of Alvarez fans in "Underground King" shirts, but they'll be nothing in comparison to the thousands wrapped in green, white and orange flags -- trust me, I can hear them chanting from the bar adjacent to my hotel room. That's probably why it's best this fight was not in Philly; no matter where he fights, it's always a pro-McGregor crowd, something that probably wouldn't have gone over well in the North Catholic grad's hometown.

As Alvarez sees it, a win over McGregor would put him in a position to start calling some shots. And given his confidence heading into the fight, he thinks this is just a temporary pit stop on the road to bringing UFC to Philly.

“Financially, this fight is going to be the biggest gain," Alvarez said recently. "And after I win it, we’ll hold the keys and force the UFC to come back to Philadelphia. I think this fight, after the fight and after the outcome of the fight, we’ll have the most bargaining power. And I’ve been waiting for a long time in this sport to feel like I’m in control. In a sport where there’s so much uncertainty, it’ll be nice and I’ll relish that role.”

“I’ll be sipping pina coladas somewhere in Mexico until it does [come back to Philly]," he added with a laugh.