UFC 205: Tale of the tape, odds and how to watch Alvarez vs. McGregor 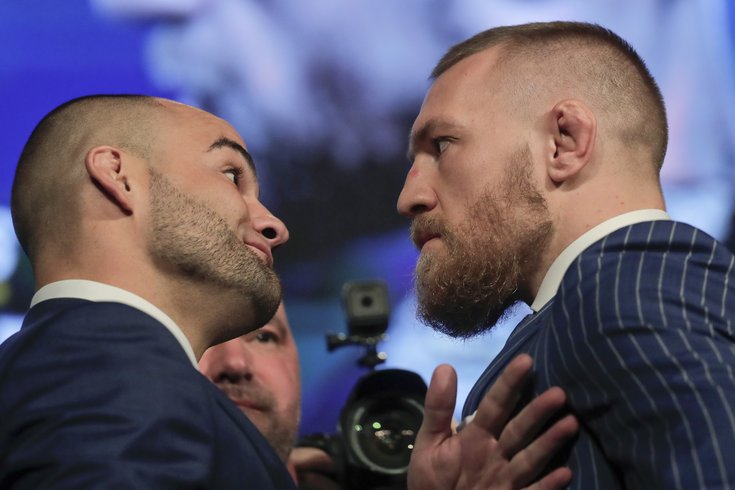 On Saturday night, the UFC will make history as MMA's biggest promotion brings a star-studded card to New York City's Madison Square Garden, a venue that has hosted some of the biggest fights in boxing history.

And the main event, which features Philly's Eddie Alvarez defending his lightweight title against current featherweight champ (and master of trash talk) Conor McGregor, is only scratching the surface of a night that will feature three title bouts and more current/former champions than any event in UFC history.

It's going to be a wildly entertaining night for sure.

Here's everything you need to know about UFC 205: Alvarez vs. McGregor, including odds for the entire card and a few ways in which you'll be able to watch the fight -- even if you don't want to pay the $49.99 it'll cost you to order it at home.

But first, a look at how these two champions headlining the historic night match up on paper:

*Fighter was part of the main event.

Here's a look at how Alvarez became the lightweight champ back in July with a stunning first-round knockout of Rafael dos Anjos:

*Fighter was part of the main event.

And here's a look at McGregor's most-recent victory, a majority decision win in his rematch against Nate Diaz:

[NOTE: This is the full fight, so if you don't have time to watch it all, you can get the highlights, here.]

REST OF THE MAIN CARD

Including two additional title fights, which begin at 10 p.m. on Pay-Per-View.

Available for free on FOXSports1, beginning at 8 p.m.

As mentioned above, all six undercard bouts, including some big name fighters like Frankie Edgar, will be available for free on FS1 beginning at 8 p.m.

If you want to watch the main card, you'll have a choice to make. If you wish to watch it at home, it's going to cost you $50 on PPV. That's not bad at all considering the magnitude of this card. You can get more info on how to order the fight, here.

If you're not looking to pay for the fight itself, or if you prefer a more social viewing experience, UFC also has a list of bars around the county that will be showing the fight. Drinks may be a little more expensive than at home, but at least the fight will be free. To see what bars in the Philly area are showing the fight, click here.