'He don't got a shot': Eddie Alvarez talks Conor McGregor, his crazy fans and much more

The Q&A ... with UFC champ (and Philly native) Eddie Alvarez 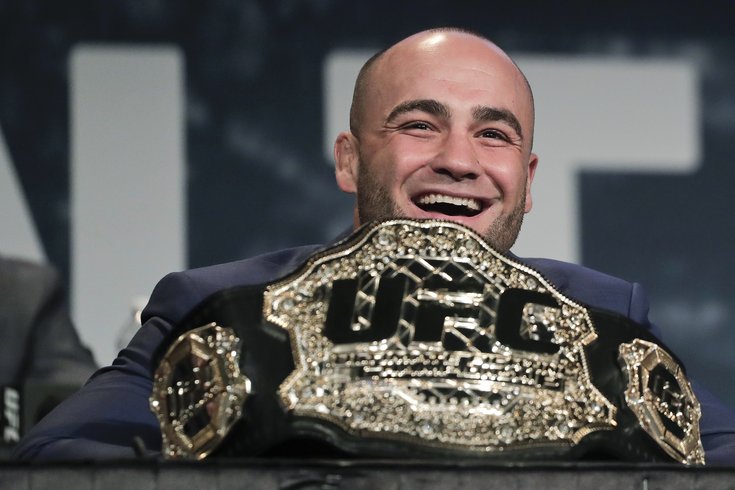 Next month, Philly's Eddie Alvarez will be front and center when UFC holds its first-ever event in New York: UFC 205 at Madison Square Garden.

The main event that night features the North Catholic grad and Kensington native defending his lightweight title against arguably the most popular fighter in the sport, current featherweight champ Conor McGregor.

Now back in Philly to train for his first UFC title defense, Alvarez took some time out to join us for the latest edition of The Q&A. We covered a wide variety of subjects, including his favorite cheesesteak spot, his love of "Friends," and why he wants to fight a member of One Direction. But before we get to that, let's start with his upcoming matchup with McGregor.

Looking ahead, we’re a little over a month out from UFC 205. You now know that’s it’s going to be against Conor. As you begin to prepare for him, what’s the one flaw in him that you’re going to try to exploit?

Regardless of how many people are backing him, or wanting him to win, he’s got to protect his own ass. Unfortunately, on Nov. 12, he don’t got a shot.

I think his biggest weakness is, of course, his wrestling and jujitsu; everybody knows that. It’s not a secret. And that’s a big strength of mine, so it would be foolish not to attack that. But I’m going to be patient; I’m going to take my time. And I’m a fighter. I can win a fight in any manner — stand-up, take-down, jujitsu, whatever it is. So it’s just a matter of going in there, taking what he gives me, and taking him out as fast and violently as possible.

Is there one thing that he does that concerns you?

I think his best attribute is his ability to react quickly. He has very quick reaction time, very quick reflexes and he’s very explosive in the first couple rounds, especially the first round or two. So it’s going to be important to be sharp, be on our A-game in the first couple rounds, make sure we’re not making any defensive mistakes. And just like every championship fight, there’s always a small margin for error. We’re always trying to chip that margin for error down to nothing and that’s what we’re looking to do — we’re looking to go in there and fight a perfect fight, good fundamentals, and take him out.

You mentioned jujitsu and wrestling, what’s your biggest advantage in this fight?

I think, I’ve trained for championship bouts for a very long time. I’ve fought the best guys in the world and I’ve fought the best guys in the world in every aspect of fighting — best stand-up guys, jujitsu guys, ground guys. So I think my experience in general, not getting too emotional, all that stuff, I’ve already failed and learned to get better and to conquer it. So my experience in general. And just on top of that, just my willingness to compete and not give up is going to be my best attribute of all.

The press conference seemed pretty crazy. What kind of atmosphere are you expecting in the Garden on November 12th?

It was fun, man. I had a lot of fun at the press conference. I think it’s going to be intense. It’s going to be intense. A lot of Philadelphia is coming up; a lot of New Jersey will be there. I think it’s going to be a mixed crowd. You know, Conor has his following and they all come, they pay big money to get inside the fight. And I’ll have mine as well. But at the end of the day, regardless of who shows up and how many [fans] show up for him or show up for me, only one guy can get inside that cage, and that’s the only person you can depend on — he’s going to have to depend on himself.

Regardless of how many people are backing him, or wanting him to win, he’s got to protect his own ass. Unfortunately, on Nov. 12, he don’t got a shot.

Do you think having Frankie Edgar — it seems like a lot of your fans overlap — and others on the card with you will help balance out the crowd a little?

Yeah, I hope so. [laugh] I have a feeling that we could booed. It would be disappointing, because we are in America, and I would like for the American fans to cheer on their fellow American. But it’s a reality that I’ve already come to grips with and am OK with. At the end of the day, the job has to get done.

So I want to apologize in advance to everyone [rooting for McGregor] who doesn’t like the outcome. [Laugh]

That’s enough about Conor for now, let’s start to lighten things up a little it. I may have asked you this before, but explain why your nickname is “The Underground King.”

There’s a line in this 50 Cent song [“Many Men”] that says, “I’m the diamond in the dirt that ain’t been found / I’m the underground king and I ain’t been crowned.” That line from that song was pretty much my career. I was the one guy who fought the best guys in the world outside of UFC. I beat everyone. I achieved everything outside the UFC, but still didn’t get the recognition I thought I deserved because I didn’t have those three letters next to my name — UFC. I just felt that I always was “The Underground King,” but I just hadn’t got that title yet, that belt. And that manifested and came to fruition three or four months ago. We’re finally crowned. But that doesn’t take back the history of fighting I went through, just trying to become known, even though I wasn’t a UFC fighter.

Who was your favorite UFC fighter when you were younger?

Shogun. Shogun Rua. [With Spanish accent:] Maurício “Shogun” Rua. Always. He was my favorite because he was young and he was fighting a lot of veterans, but he always fought with a great spirit and fought hard. I liked that he wasn’t the most technical, but he’d fight hard the whole fight.

I don’t know. I always say that when I’m done with fighting, I want to wear a suit. I want to dress up every day in a suit and tie because I always leave the house looking like sh*t in sweatpants and t-shirt when I’m off to the gym. Which isn’t bad, to have to go to a job like that. But I think I’d like to wake up, sort of make my own schedule, but dress up in a suit and tie. I don’t know what I would be exactly, I just know that it would be in the business world. But I have no clue.

What was the worst job you ever had before you were fighting for a living?

The hardest job was concrete work. I was doing that and training at night for like four or five years of my life. That was a very hard life to live. I look back sometimes and don’t even know how I got through it. But, yeah, I was originally doing concrete work, pouring yards and yards of it, finishing concrete, raking it, all that stuff that comes along with it. Rock work, brick work, basically a bunch of masonry work. And that was really tough, both physically and mentally draining.

Steve’s Prince of Steaks at Comly and the Boulevard.

Always, I do a turkey, what is it, me and my wife always split a turkey classic with American and a big bag of Hot Fries. Hot Fries are one of my favorites.

Is a hot dog a sandwich?

A hot dog is a poison. [Laughs] It’s neither a sandwich nor is it food.

What’s your favorite beer or alcoholic beverage of choice?

I like red wine. There’s one called Uppercut that’s awesome. And I like Apothic. Apothic Red is my all-time favorite.

Yeah, the soccer team. I rep the Philly Union.

Favorite Philly athlete of all time?

This is a really hard one because I have so many I could go with. Like, I could go with a serious one, but I’m more of a comedy guy, like I love “Along Came Polly.” I think that’s a really funny movie.

She starting yelling and cursing at him to pick the phone up because Eddie Alvarez was in her booth. She lost all account of being professional and being at work, but I think it was funny.

I’m going to go out on a limb and say you’re a big Jennifer Aniston fan?

What’s your favorite shore point to go to?

Cape May. I got engaged in Cape May. That’s me and Jamie’s favorite spot.

What’s your favorite place to travel to?

Disney World. We love taking the kids there and go pretty often.

What’s one hobby you have that might surprise people?

You can catch me at Lowe’s or Home Depot after fights. I love doing work to my house, like re-doing the kitchen, bathrooms, anything having to do with remodeling a house, I love that. It’s something I really enjoy.

I think it was this lady working the booth when I had to pay to leave the parking lot after winning my belt. The lady at the booth recognized [my wife] Jamie and me because she watched the fight the night before. And her reaction was so crazy that she forgot that she was at work. She would’t let us through the exit until she called her husband, and when she called him the voicemail picked up. She starting yelling and cursing at him to pick the phone up because Eddie Alvarez was in her booth. She lost all account of being professional and being at work, but I think it was funny. She came out of the booth and took pictures, but she never let up the thing to let me through, so I kind of had to do whatever she wanted.

Have you met any cool celebs or been starstruck at all since winning the belt?

One last question. I don’t know if you ever saw “Fight Club” but — If you could fight any person, dead or alive, who would it be?

I have. [Long pause] I’ll go with this One Direction guy, Niall Horan. He recently tweeted at me — I guess he’s a huge Conor McGregor fan — he recently tweeted me, “God bless you,” as if to say I need a blessing because I'm fighting his girlfriend. So, yeah, I’d fight him.