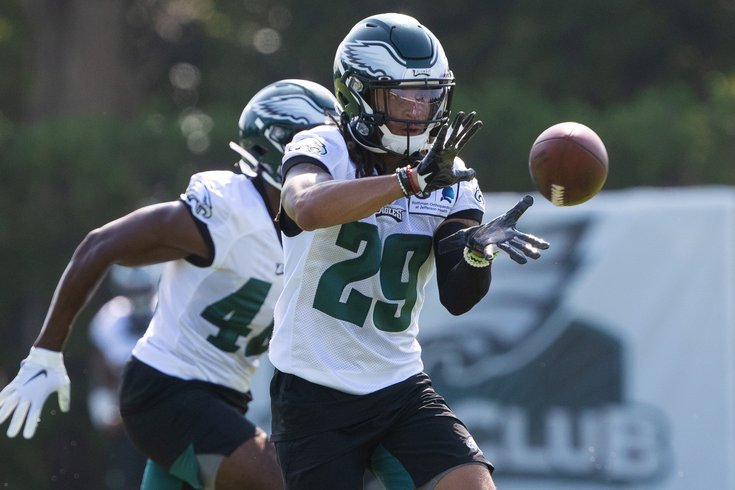 On Wednesday morning, ESPN ranked all 32 NFL teams by their under-25 talent. The Philadelphia Eagles came in at... drumroll... 32nd! Here's a portion of their explanation:

The Eagles haven't enjoyed the sustained success of the Patriots over the past two decades, but they land in the No. 32 spot in the under-25 rankings for the same reason the Patriots land one spot earlier. They have accumulated one of the deepest and most talented rosters in football, but nearly all of that talent is over 25 years old. Carson Wentz remains one of the most appealing franchise quarterbacks in the game, but he aged out of the under-25 rankings last year. Every starter at wide receiver and defensive back is 26 or older. And perhaps the team's best unit, their offensive line, has an average age of 31 years old.

The Eagles' placement on that list is understandable, given that they have only made five picks in each of the last two drafts, and they have a roster stacked with veteran talent, making it difficult for younger guys to get opportunities. Additionally, recent high picks such as Andre Dillard and Sidney Jones were selected with the long-term in mind.

Despite their low ranking in 25-and-under players, the Eagles have their share of players who have never produced for a full season, but are positioned to do so in 2019. Here are eight:

Sanders missed all of spring practices, and there were concerns that he would be behind when training camp kicked off a couple weeks ago. Nope. He's explosive, and has been better than expected in pass protection and as a receiver. He is very clearly, in my view, already the Eagles' best running back.

This is well-covered ground already, but Goedert is going to be a very good tight end in the NFL. He certainly doesn't lack confidence, as he told the Inquirer's Bob Ford that he's already the fourth-best tight in the league.

On how many NFL teams would Goedert be the number one tight end right now?

It's really not that crazy a statement. Back in early July, we cut up video all of Goedert's targets in 2018, with analysis. Here's the video:

Normally, when we do those types of video cut-ups, it's pretty easy to find a handful of negatives on a player. With Goedert, I couldn't find any recurring issues. He has good hands, he runs good routes, he gets yards after the catch, he's fearless over the middle, and he's a good blocker (not shown in the video).

All he needs is more opportunities, which he'll get this season.

Seumalo had a promising rookie season in 2016, when he played four spots along the offensive line. He began the 2017 season as the starting left guard, but after experiencing major struggles, most notably Week 2 against the Kansas City Chiefs, Seumalo was benched in favor of Stefen Wisniewski.

In 2018, Seumalo began the season on the bench, but he replaced Wisniewski in the starting lineup at LG Week 5, because of how he was performing each week in practice. While many thought at the time that replacing Wisniewski wasn't a major upgrade, I do think it ultimately turned out to be the right move, as Seumalo played well enough, and looked like a competent starter going forward.

The team values Seumalo's versatility, length, athleticism, and intelligence. On the outside, he is often viewed as the one unproven starter on the Eagles' offensive line. Now confident Seumalo is confident in his abilities this year, my understanding is that the team believes that Seumalo has had the best camp of his career, and is ready to make a significant jump in his fourth season.

In my view, Barnett already broke out last season, but I can understand why he isn't viewed as a established player yet by the fan base.

We've noted this in a film breakdown of Barnett's 2018 season earlier this offseason, but when the Eagles traded Michael Bennett this offseason, most observers rightfully pointed out that Bennett was the team's most productive edge rusher in 2018, as he had nine sacks, 15 tackles for loss, and an impressive 30 hits on the quarterback. With Barnett coming back as the starter at RDE in 2019, many consider him to be a downgrade from Bennett.

I disagree. In Barnett's first four games, when he was healthy, he was a very disruptive player, both against the pass and the run. In fact, if you take Barnett's numbers during those first four games and extrapolate them over a 16-game season, they would have been better than Bennett's:

Barnett was disruptive, and he was building on a good rookie season. In 2019, while Barnett hasn't fully participated in practices in training camp, he is expected to be 100 percent for the regular season, and the expectation is that he'll pick up right where he left off in 2018.

Throughout training camp, I'll chat with fans on the sidelines most days, and many ask which player has been impressive. I gave all of them the same answer this year -- Kamu Grugier-Hill. (If you were one of them, back me up! Ha.)

In college, Grugier-Hill was something of a safety-linebacker hybrid, and he entered the league with very good athleticism. The measurables he posted at his pro day were similar to Mychal Kendricks' impressive NFL Combine performance.

However, at 6-foot-2, 208, he was obviously undersized. Over the last three years, Grugier-Hill has worked hard at transforming his body into that of a three-down linebacker, and he's now playing at around 230 pounds. In 2019 training camp, he looked to me like a smarter Kendricks.

And then... Grugier-Hill suffered a Grade 3 MCL strain in the second week of training camp, and it is expected that he will miss a small amount of time to start the season. However, whenever healthy again, if he can continue to play the way he was playing when he went down, he'll be a good starter.

As a result of a laundry list of injuries in the secondary in 2018, Maddox was forced into action, and he played well at outside corner, slot corner, and safety. The moment never seemed to phase Maddox in any way.

In 2019, he's going to be a regular in the defense. He'll primarily by the slot corner, but Jim Schwartz will also likely find additional ways to get him on the field.

In our "stock up / stock down" Philly media poll, Jones received the most "stock up" votes in the survey, and with good reason. It's the first offseason he has been able to stay healthy, as he has had sticky coverage and gotten his hands on a lot of footballs. There have been very few occasions in which he has been beaten.

I do still think there are concerns about his play strength, but his progression in 2019 is encouraging, and he's highly likely to start on the outside Week 1.

Douglas has gotten opportunities in the past, as he has played in 30 games and started 12, but he has never been a full-time starter for an entire season. With Jalen Mills still on PUP and Ronald Darby continuing to recover from his torn ACL, Douglas should see an increased role in 2019, and he has had his best training camp as a pro.