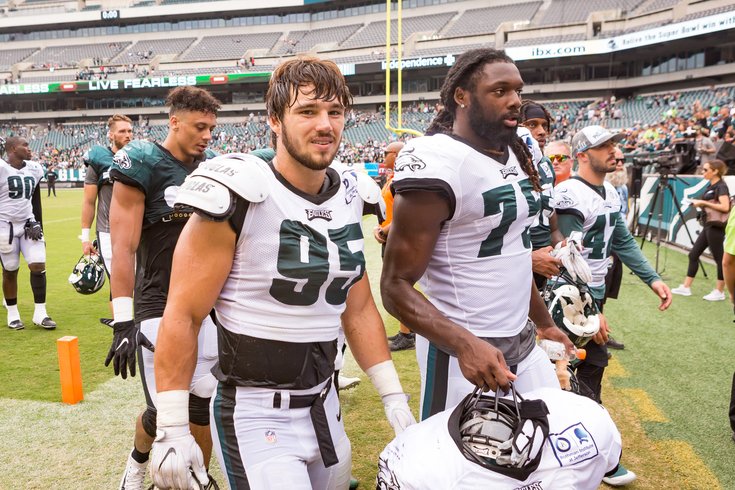 Joe Ostman and Josh Sweat at an open practice back in 2018.

On Sunday night, the Eagles' recent history of injuries at their open practices continued with defensive end Joe Ostman being carted off the field. On Tuesday, the team revealed that Ostman would be out for the season after tearing his ACL at the Linc over the weekend.

While the loss of Ostman, who was signed as an UDFA in 2018 and spent last season on the practice squad, isn't a huge blow for the Birds, it isn't nothing either. The Eagles had been pumping up the the 24-year-old pass rusher out of Central Michigan and had high hopes for him in 2019. After entering the summer as more or less an afterthought on the defensive line, Ostman has been steadily climbing the depth chart, and even snuck on to the roster in Jimmy Kempski's latest 53-man projection after Jimmy was converted to a believer.

Here's what Jimmy wrote about Ostman after a recent practice:

Dating back to the 2018 season, the team has praised Joe Ostman any chance they have gotten. Defensive coaches, offensive coaches, Howie Roseman, etc. That has felt a lot like the team going out of its way to give props to a guy who works hard, and I'll admit having skepticism when listening to their comments.

But you know what? I'm starting to see it. Yesterday, we mentioned that he smoked Jordan Mailata twice in team drills. Today he left Mailata in the dust once again on an inside spin move that also worked yesterday, and he had a nice TFL on a run play. However, what was more eye-opening than the plays that he is making is that the Eagles are standing him up over the center at times in something of a Joker role. On one occasion, he knifed through the line for a sack while standing up over the center...

He has impressed the staff with said motor, but it's becoming hard to ignore that he's also making a lot of plays, and the team seems to be trying to expand the way they are using him.

He was also one of the players whose stock has been on the rise at training camp, prior to the injury of course:

It seems like everyone in the organization has been pumping up Ostman for about a year now, and practice observers are beginning to see why. He has been legitimately good, and not just in a "he's hustling more than everyone else" kind of way. He's been so intriguing to the Eagles, in fact, that Jim Schwartz is trying to find additional ways of using him. Recently in practices, Schwartz has been standing Ostman up over the center is something of a Joker role.

So, in Ostman, it appears the Eagles not only lost potential depth at a position where they needed it — defensive end, after losing Chris Long and Michael Bennett in the offseason — but also a guy they saw as disrupter along the defensive front. This could open up a roster spot for someone like Daeshon Hall, who was just behind Ostman on the Eagles depth chart.

With Ostman going on Injured Reserve for the season, the Eagles brought in Kasim Edebali to take his spot on the roster.

Edebali, a 30-year-old defensive end, has spent five seasons in the NFL, with most of his production coming early on when he was with the Saints. In three seasons with the Saints from 2014-16, Edebali played in all 48 games and recorded eight sacks. In the two years since, however, the German-born player has appeared in just 14 games and has failed to record a sack. He spent 2017 split between the Broncos and Lions before appearing in just one game for the Bengals last season.

Harris was with the Eagles in the spring, and now finds himself back on the team with just a few short days remaining before their preseason opener.

We'll likely get our first look at Edebali and Harris on Thursday night when the Eagles host the Titans at the Linc.